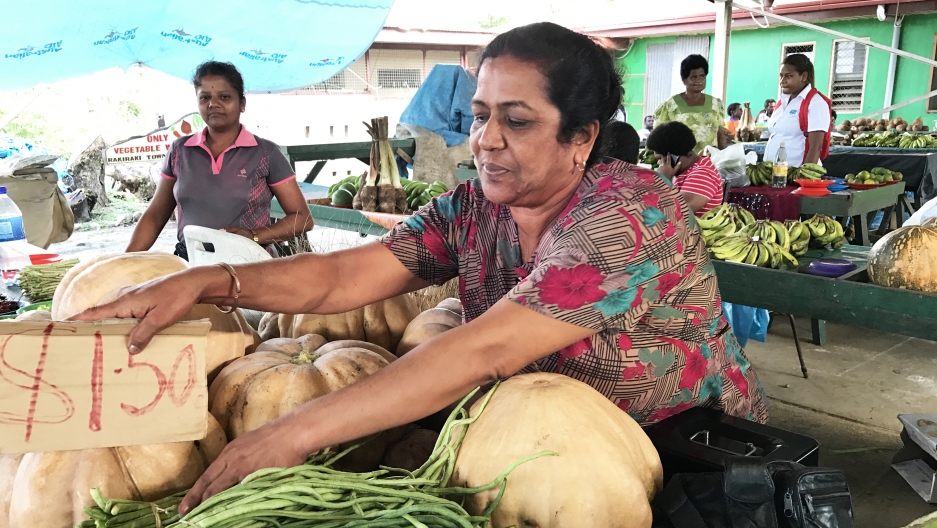 The extreme weather has made it impossible for Sunila Wati to continue farming. Now, she buys vegetables from other sources and resells them at the market, but she’s not able to make any profit.

Sunila Wati arranges green beans and pumpkins at her farmer’s market booth in the town of Rakiraki. It’s almost all women selling fruits and vegetables here, and Wati chats with the market ladies in her row as she waits for customers.

When I meet Wati in the month of March, it happens to be the festival of Holi, which celebrates springtime. Indian folk music plays on a radio at one of the stalls, but underneath this festive appearance, Wati and the other women are struggling to survive. In February 2016, an extreme cyclone hit Fiji, and Wati’s home was among 30,000 that were destroyed. It was the worst cyclone to make landfall in Fiji’s recorded history.

“The roof and things in our house flew away,” Wati says. “The water flooded our home and ruined everything. After the storm, the mud and water rolled down from the mountains in landslides and destroyed our farms.”

She describes how the cyclone turned her life upside down in a day. “Before the storm, I used to grow everything,” she says. “I planted cabbage, coriander, lettuce and eggplant. The cyclone turned my farm into a muddy jungle, and I’m not able to farm anymore.”

Agricultural work has long been the sole source of income for many rural women in Fiji. But climate change has plunged women farmers into deep financial trouble, and many now find it difficult to feed and support their families. Scientists point to warming ocean temperatures as a factor behind greater intensity cyclones and changing weather patterns in the South Pacific.

In desperation, Wati and other farmers turned to local aid groups for help. One organization offered her seeds that were supposed to grow in harsh conditions. However, the new seeds were no match for the heavy rains that continued to fall long after the cyclone. Wati says locals are used to lots of rain, but they’ve never seen so much extreme weather at once.

“We received seeds for French beans, cucumbers and watermelon,” she says. “As soon as we planted them and they started growing, the floods came and swept everything away.”

It was devastating, but Wati was determined to get back on her feet. She was willing to try anything. So, she started buying vegetables from other sellers and then reselling them at the market. Still, she’s finding it really hard to make a profit.

“What I’m buying, I end up selling at [the] same price,” she says. “Now, we have nothing. No money. No profits coming in. And, very expensive vegetables we are buying.”

Sunila Wati showed up at the market on a Sunday and set up all her produce along the sidewalk, hoping that someone would buy.

Wati used to have a decent middle-class life, but she and the other women farmers here are now living on the edge. Every day, she wonders how long she can survive like this. She even thinks about trying something completely different.

“I thought of taking lessons and becoming a cook. It kept coming in my mind, but I decided not to think like that. I want the business to be like before.”

But it’s changed so much since the big storm. The women say the market used to have lots more hustle and bustle. And the extreme weather keeps coming. In one heavy rain, Wati slipped in the water and fell on the way to work.

“I couldn’t come to the market for three days and lost a lot. My vegetables got spoiled while they were kept on the table,” Wati says. “Every day, even now, there is water and flooding on the streets on the way to our house. It has become a very hard life for us.”

But she has a teenage son to put through school and says she’ll keep trying no matter what. In fact, she hasn’t given up on trying to farm again, either, if the rains let up enough. It’s been a way of life for women here for generations, and she misses it.

She says farming is the only thing she knows. “I like to do farming and sell my fresh produce. I am able to earn money for myself and buy things for my household. I like the fact that I am able to farm on my own, and then sell my own vegetables.”

At the end of the day, Wati pours coins from her fanny pack into a black money tin she keeps at the market. She then sweeps up the dust around her stall and covers up the unsold produce at her table.

After a long day at work, Sunila Wati boards a bus back to her village, a half-hour ride away from the Rakiraki market.

With scientists predicting more extreme weather for Fiji, Wati faces an uncertain future. Not only is the rainy season more intense, she says recent dry seasons have been much drier than years past, and the temperatures hotter. She dreads the thought of another cyclone like the one that destroyed her crops last year and doesn’t know what she’ll do if it happens again.

As it starts to rain again, Wati runs outside to the curb to catch a packed bus back to her village. She waves from the window as the bus pulls away down the wet roads.