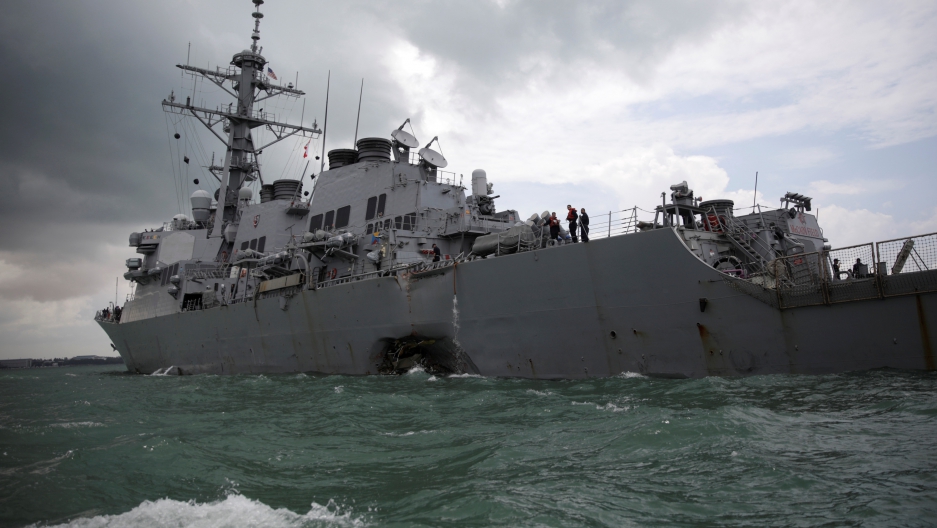 A gash can be seen in the destroyer, the USS John S. McCain, after a collision with civilian ship on Monday

The commander of the US Navy's 7th Fleet, Joseph P. Aucoin, has been relieved of his post after another deadly collision at sea.

The Navy said there was a “loss of confidence” in Vice Adm. Aucoin’s ability to command.

The Navy is also planning a rolling global operational pause, to take time to remind all its sailors of the fundamentals of seamanship.

On Monday, the destroyer the USS John S. McCain became the fourth Navy ship involved in an accident at sea this year.

Like the USS Fitzgerald in June, this was a deadly collision with a civilian vessel.

There is no suggestion of foul play. There is also no suggestion that Aucoin was directly responsible for the incidents, but the Navy has a strong tradition of accountability. If it happens on your watch, it’s your responsibility.

“Admiral Aucoin was in charge of this fleet,” says Dan Lamothe of The Washington Post. “This fleet has had several incidents. Therefore they want to change the leadership at the top to set the tone that basically there will be accountability, starting with him, on down with anybody who missed something [or] didn’t do their job appropriately each and every day.”

Aucoin's removal was first reported by The Wall Street Journal and confirmed by the Navy on Monday.

Aucoin was scheduled for retirement soon. But the captain of the USS Fitzgerald and several of his officers have also been relieved of their posts or disciplined. Their careers will be damaged for sure, says the Post's national security reporter.

“It will be extremely hard to come back from this,” Lamothe says. “It would likely be a career-ending sort of situation.”