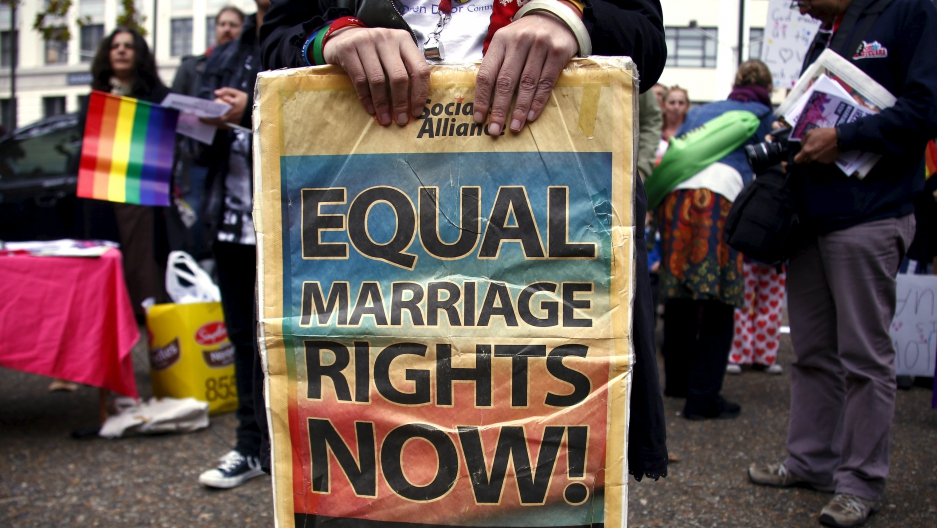 A gay rights activist holds a placard during a rally supporting same-sex marriage in Sydney on May 31, 2015.

Editor's note: The results of the voluntary, nonbinding postal survey were announced Nov. 15. Australians voted overwhelmingly in support of marriage equality, with 61.6 percent voting "Yes" and 38.4 percent voting "No." Turnout was also high — 79.5 percent of Australians participated, including 81.1 percent of women aged 18 or 19 and 75.1 percent of men in the same age group. By comparison, in the 2016 US presidential election, about 58 percent of eligible voters cast ballots, including about 50 percent of Americans aged 18-29.

If Australian conservatives thought young people would ignore a nonbinding postal survey on marriage equality, they were wrong.

Under pressure from his party's vocal right wing, Australian Prime Minister Malcolm Turnbull announced on Aug. 8 that a nonbinding plebiscite (or vote) of the nation's citizens will be held by mail to determine whether Australians support legalizing same-sex marriage.

Notwithstanding that we already know the stance of most Australians on marriage equality — they support it, according to a number of recent polls — the option of a plebiscite had been strongly opposed by LGBT communities and marriage equality advocates. They’d pushed for a vote in Parliament that would have changed the marriage law. In early September, Australia’s High Court will consider whether the planned plebiscite is unconstitutional.

Critics say the postal survey is little more than an opinion poll — one designed to defer action on marriage equality and perhaps skew results in favor of older, more conservative respondents.

Opponents of LGBT rights do seem emboldened by Turnbull’s announcement. Laws against malicious and misleading campaign material that apply during elections and referenda do not apply in the case of a plebiscite, and some campaigners against same-sex marriage (largely members of hard-right and religious-fundamentalist groups) are virulent in their opposition, using imagery ranging from child theft to bestiality in their appeal to the public to vote “no.”

Many LGBT people have reported an uptick in homophobic and transphobic abuse and are expecting it only to get worse as campaigning grows in advance of the survey scheduled for counting after Nov. 7.

“We’re definitely a target for abuse in a way that we’ve not had problems with before,” said South Australian Sarah K. Reece, who has two children with her same-sex partner. “Strangers have yelled obscenities at us in car parks when they see our car with our rainbow ‘all families matter’ sticker. People have told us we’re abusing our kid and should be reported. One of the big online parenting groups we were part of had a member post about queer parents and families being unnatural and harming kids, and admins allowed the conversations to happen.”

Reece says the question of whether same-sex marriage should be permitted has created space for people to say that being queer is “wrong, sick or evil.”

“Suddenly it’s OK for strangers to comment, even face-to-face, in a way I haven’t experienced before,” she said. “There’s many who believe that even exposing children to the idea of people like me and families like mine is harmful and wrong. They’ve been given a voice, and they’re using it. Kids are hearing that their families are wrong, and their parents are sick and disgusting.” 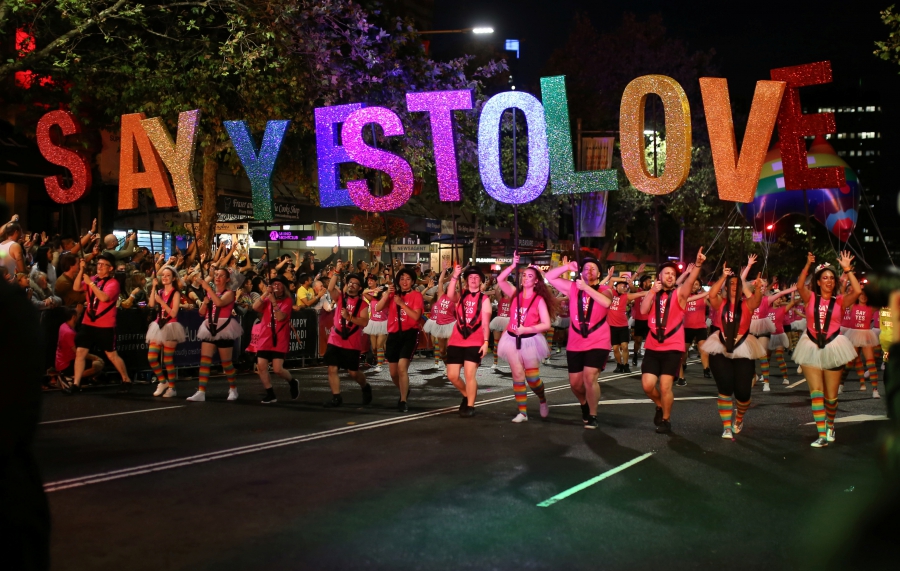 Participants march during the annual Sydney Gay and Lesbian Mardi Gras in Sydney on March 4, 2017.

If the vote has stoked anti-LGBT sentiment, it’s also rallied supporters of gay rights — especially young people. For many young Australians who support marriage equality by large margins, a survey that seems designed to limit their participation is having the opposite effect.

Within a day of the plebiscite being announced, the Australian Electoral Commission reported an influx of queries from young people aged 16 and 17 regarding their eligibility to vote and processed approximately 68,000 enrollment transactions compared to an average daily intake of 4,000.

There are many reasons why young Australians might choose to sit out the plebiscite. It’s the age of electronic media, and their generation has little contact with the postal system. They’ve also lost some faith in the political institutions involved. The survey will be administered by the Australian Bureau of Statistics, which suffered a massive security breach on census night last year, compromising thousands of Australians' privacy and preventing many from being counted. The minister in Parliament overseeing the bureau was revealed earlier this month to have a history of publishing anti-gay vitriol.

The survey requires participants to be registered correctly with the Australian Electoral Commission, and young people experience disproportionate practical barriers to enrollment and participation. They are more likely to have moved from their initially enrolled address or to be traveling overseas, and unemployment, currently affecting a third of young people, can mean voluntary electoral participation isn't high on their list of priorities.

Administering the plebiscite will cost taxpayers 122 million Australian dollars ($96 million) at a time when many young people are facing economic pressures that some argue could be eased by greater government investment in education and employment.

It doesn’t help that the vote is nonbinding and may not even go ahead if the High Court challenge succeeds.

"It’s about saying F&%K YOU to the far-right faction of the Liberal and National parties who hold our government, and thus our entire country hostage to their out-of-touch prejudices and ideologies.”

And still, turnout for this voluntary nonvote could be strong among young people between the ages of 18 and 24 if campaigns by media organizations, universities and other organizing groups yield results. Youth media such as Triple J, BuzzFeed and Junkee are urging young people to ensure they’re correctly enrolled. Some websites temporarily went dark Wednesday to encourage enrollment and voting. The Australian Broadcasting Corporation reports students at a northern Tasmanian school have been running electoral enrollment sessions for students who will reach the voting age of 18 in time to participate.

National Union of Students President Sophie Johnston told HuffPo Australia that it's "the biggest youth voter drive we have seen in decades." Tens of thousands of Australians have newly enrolled, and more than 400,000 have updated their enrollment since Turnbull's announcement. "We are very, very confident a lot of those people are students or are young people," Johnston said.

There’s no mistaking it: Young people are actively overcoming electoral hurdles, some of which have no doubt been put in their way deliberately, so they can vote “yes” to marriage equality.

Writing for Junkee, Sally Rugg, the marriage equality campaign director for the progressive advocacy group GetUp, put it this way: “It’s about saying F&%K YOU to the far-right faction of the Liberal and National parties who hold our government, and thus our entire country hostage to their out-of-touch prejudices and ideologies.”

In pursuing their voice in the plebiscite so urgently, young Australians are registering their opposition to policies advanced by the country's aging, more conservative leaders at a time of increasing political isolation for the Land Down Under.

If conservatives reasoned that a nonbinding mail-in survey on marriage equality would drive down youth engagement, they’ll be kicking themselves if it galvanizes young Australians. After all, it’s this generation that's urging an entirely different tack on climate change, immigration and other global issues.