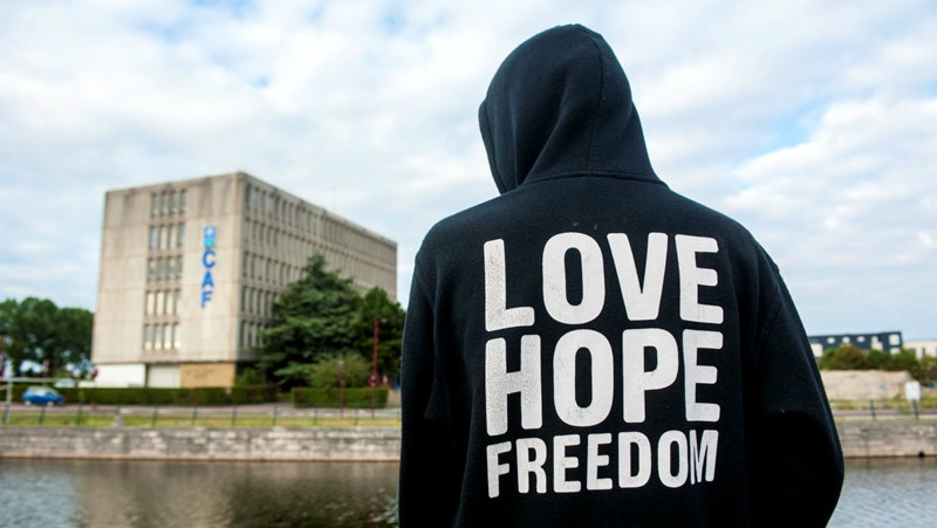 A young refugee on the outskirts of Quai Andrieux in Calais, France, after a meal distribution, July 25, 2017.

They live in quiet corners of Calais and forests on the edge of town. They must stay out of sight of the police who are on the hunt for refugees returning to the port city.

Local organizations estimate between 500 and 600 people are back in Calais since the demolition of the “Jungle” migrant camp and dispersal of some 10,000 people last October. They include former Jungle residents and new arrivals. Around 200 of them are children traveling alone.

Many hope to find a way across the English Channel to fulfill different dreams: joining relatives, making use of their English skills to build a better life, seeking asylum in the UK amid frustration with the slow process in France. 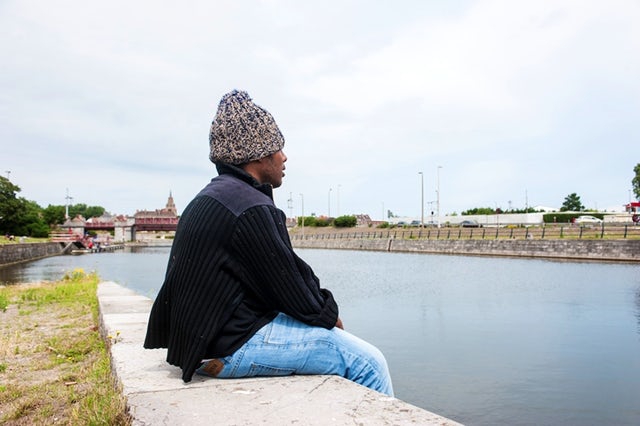 In the past nine months, French authorities have done everything they can to prevent a new camp from forming in Calais, as has repeatedly happened in the past. Calais authorities barred distribution of aid until a Lille court ruled this was “inhuman and degrading treatment” in March. Meal distributions are still heavily restricted to certain times and locations and are routinely disrupted by police. 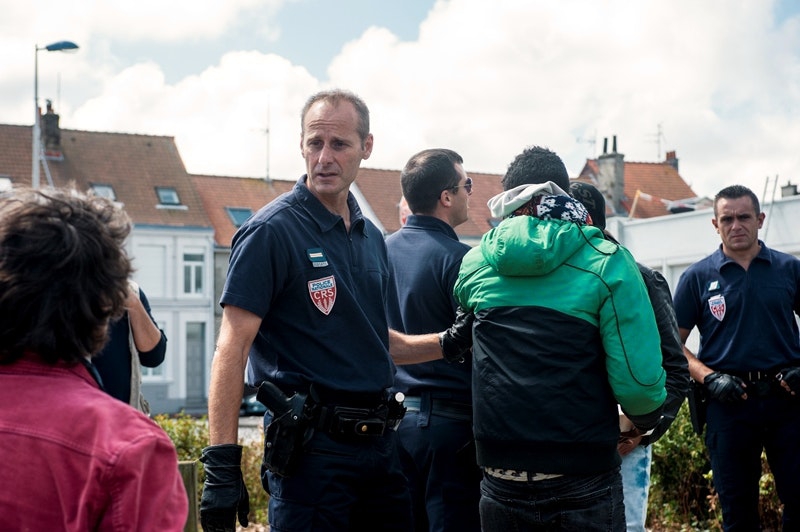 A policeman catches a young refugee who had just received a meal. He must leave the area without eating, July 25, 2017.

In late July, volunteers assembled one rainy evening near the city’s Quai Andrieux to find the police already there, chasing refugees who had gathered for the food distribution under a canal bridge. Once the volunteers arrived, police verified their identities but said they had no orders to prohibit the distribution and left.

Mohamed, a 53-year-old Syrian man, was among the eldest of some 40 asylum-seekers there. Like the others, he had come for a hot meal and water to shave and wash. With a controlled manner, he said the police had never abused him but regularly ask him to leave the city. 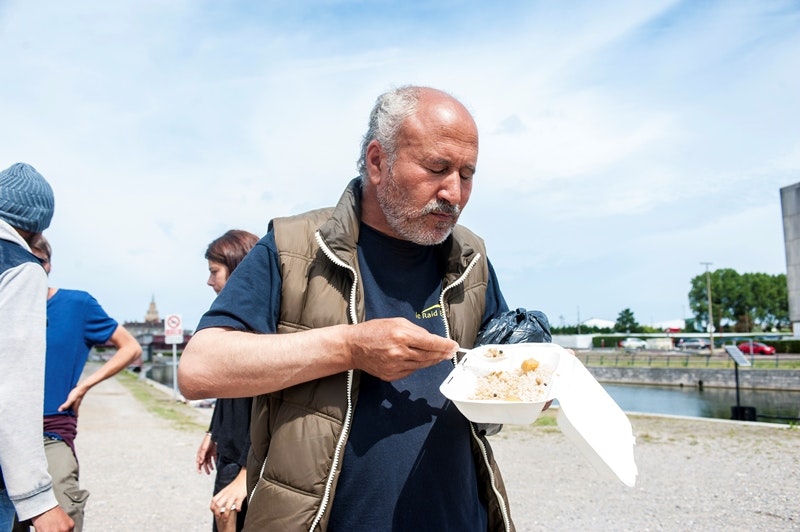 The following day, the police were out in force at the same distribution point, this time trying to stop volunteers handing out meals. A few refugees tried to eat quietly on the lawn as the police began identity checks. Seven volunteers who refused to present their identity documents were detained. 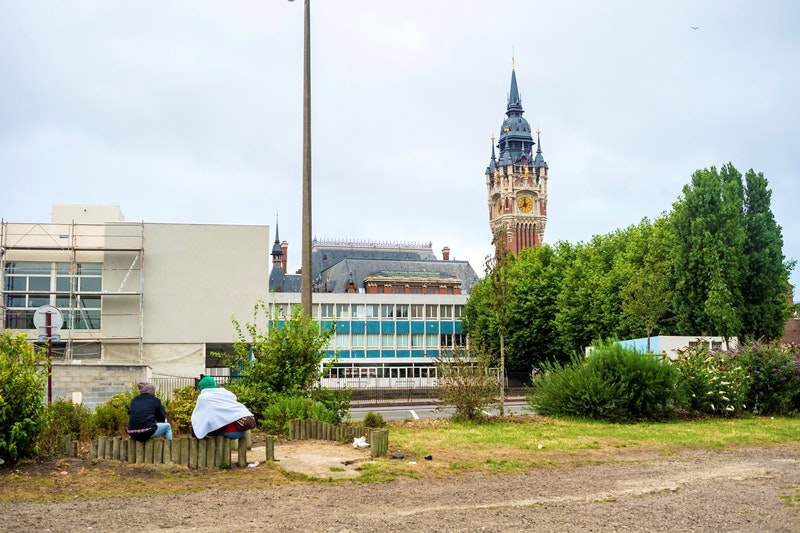 Gael Manzi, the co-founder of UTOPIA 56, the citizens' association for migrants that organized the food distributions, says his teams have faced police threats, pepper spray and regular fines. Manzi feels the harassment is systematic in order to deter solidarity efforts. 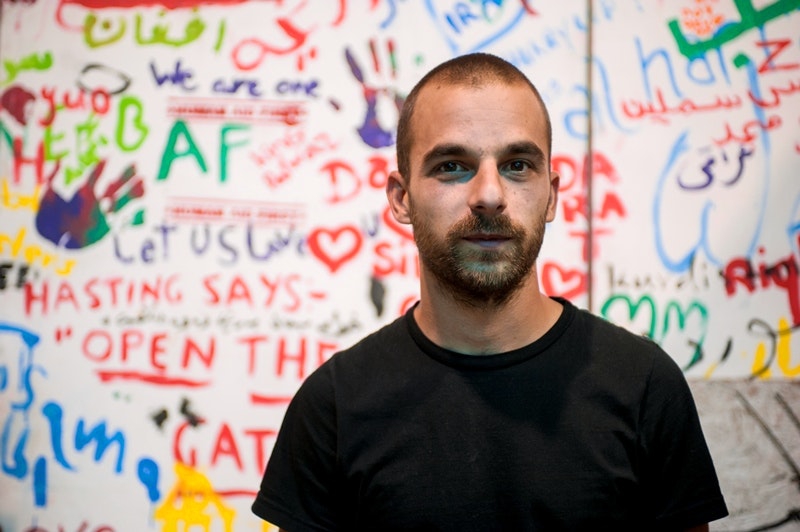 Gael Manzi, coordinator and co-founder of UTOPIA 56, an association that mobilizes citizens to help migrants, July 26, 2017.

The city has also refused to install drinking water and toilets for migrants, as ordered by the Lille court. France’s top administrative court, the Conseil d’Etat, ruled that this was unlawful in late July. French interior minister Gerard Colomb said the government would comply with the ruling, but Calais Natacha Bouchart called it an “injustice to the people of Calais” and vowed not to allow any facilities. 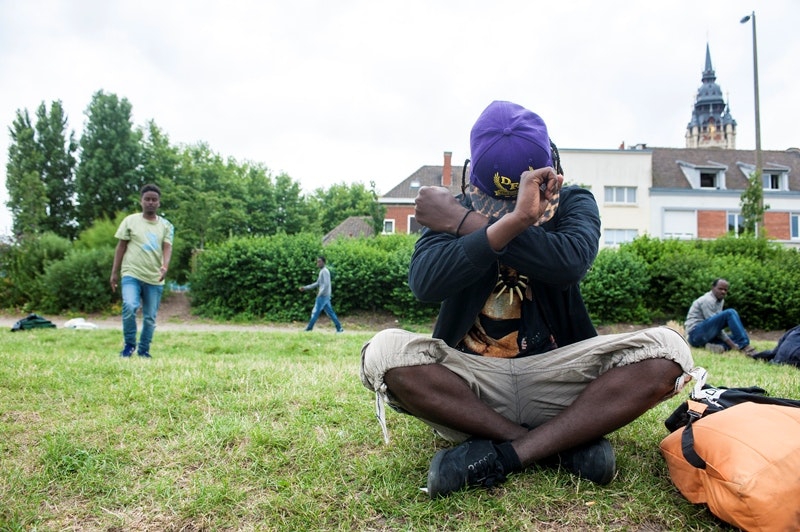 Jaamal, an 18-year-old Oromo refugee crosses his arms in front of his head to condemn the situation in Calais, July 26, 2017.

It is impossible for the refugees to get much sleep in Calais. So as not to be spotted, they no longer use tents and take shelter wherever they can. Small, hidden "jungles" are reborn in woods and forests, where humanitarian workers have very limited access to them.

Dozens of asylum seekers and aid workers described routine police abuse in interviews with Human Rights Watch last month, including being woken at night, having sleeping bags confiscated and regularly being doused in pepper spray. 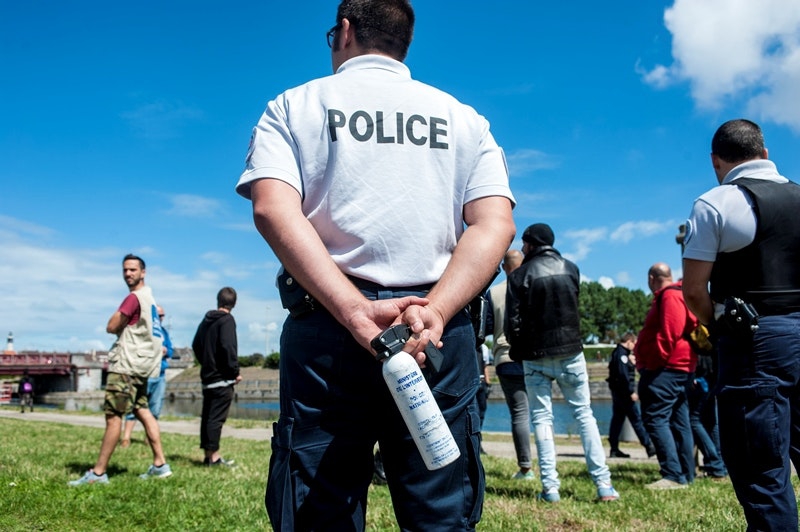 A policeman holding pepper spray keeps the refugees and volunteers from leaving the perimeter. Police stop the supply of meals for refugees and carry out identity checks, July 25, 2017.

The deputy prefect for Calais, Vincent Berton, called the report’s findings “slanderous.” For many in the underground Jungle, they were obvious.

“They gas us, they hit us at any moment,” said Qeraso B., a 17-year-old refugee from Ethiopia from the Oromo people, who have long been in tension with the government. He was studying for a pharmacy degree before he fled his country and hopes to join family in the UK.

Qeraso does not understand why the French police are chasing them all the time. A week earlier, he fell running away from police and had to get three stitches to his head in a Calais hospital, which are scarcely concealed under a dressing and his woolly hat. Mehdi D, a volunteer nurse from the “Réveils voyageurs” collective, changes his bandage every day. 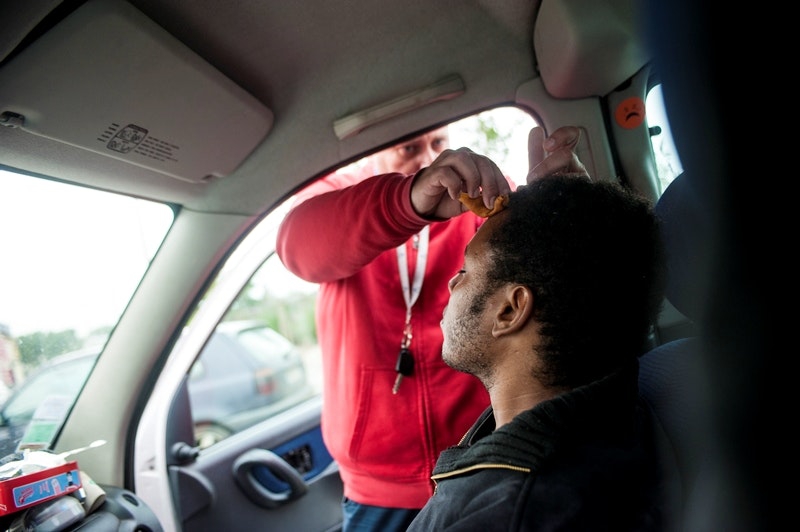 Qeraso feels the police take advantage of the refugees’ isolation to harass them. He was sleeping under a bridge later that week when police arrived at 2 a.m., pointing flashlights and shouting, spraying pepper spray and seizing their sleeping bags and blankets, he said.

“We are humans, not animals,” Qeraso said. 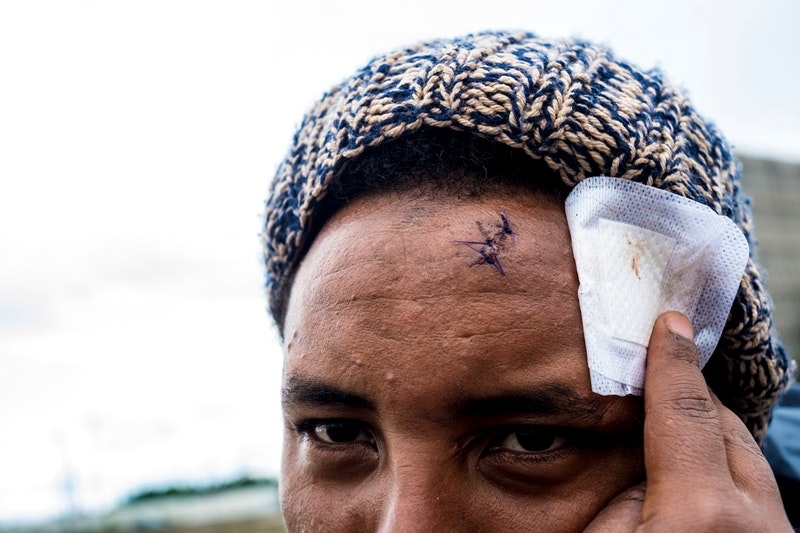 Hussen, another Oromo refugee who is 20 years old, said he once fell into the water while trying to flee a police check by the canal. Hussen cannot swim and one of his friends had to save him.

“I do not bother anyone. I’m hungry, I’m cold, I cannot sleep,” Hussen said. “I’m just here to live and continue on my way. Why are we being treated like that?” 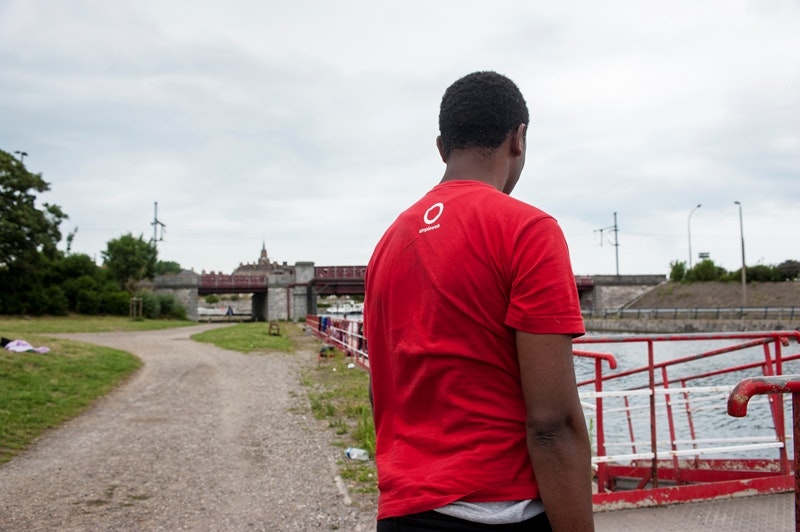 Hussen, a 20-year-old Oromo refugee, stands in front of the canal in Calais where he fell during a police check, July 26, 2017.

Julien Pitinome reported from Calais, France. Migrants' names have been changed to protect their identities.This article originally appeared on Refugees Deeply, and you can find the original here. For important news about the global migration crisis, you can sign up to the Refugees Deeply email list.