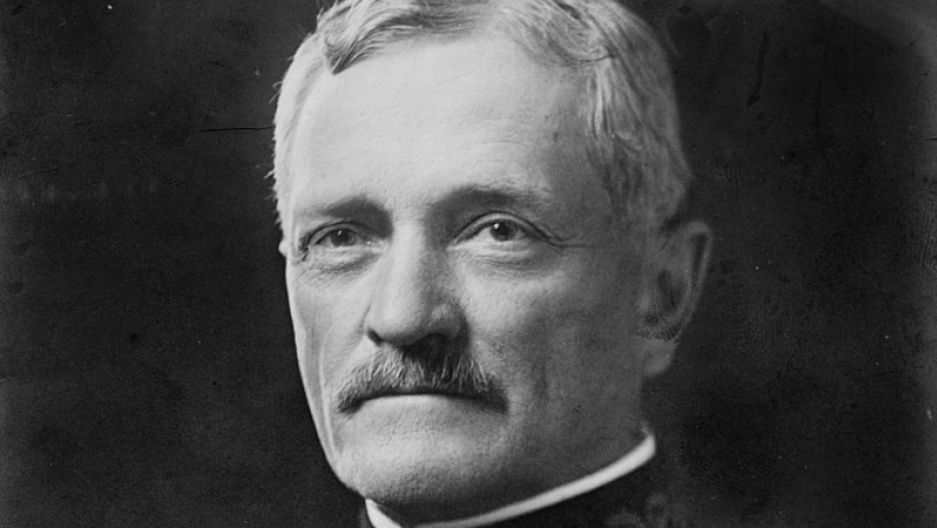 It didn’t take President Donald Trump long to condemn the terror attack in Barcelona on Thursday. But his follow-up tweet has raised some serious eyebrows among historians, veterans, human rights groups and counterterrorism experts:

Study what General Pershing of the United States did to terrorists when caught. There was no more Radical Islamic Terror for 35 years!

So what does he mean?

Trump is referring to an urban legend that he first used on the campaign trail, and it goes something like this: During the US occupation of the Philippines a little over 100 years ago, there was a violent insurgency by a mainly Muslim population in the south. A US soldier, identified as Pershing by Trump, summarily executed dozens of captives using bullets dipped in pig's blood. Pigs and pork are haram, or forbidden, for Muslims.

Here’s an excerpt from a speech Trump gave at a rally in South Carolina in February 2016:

“They were having terrorism problems, just like we do. And he caught 50 terrorists who did tremendous damage and killed many people. And he took the 50 terrorists, and he took 50 men and he dipped 50 bullets in pigs’ blood — you heard that, right? He took 50 bullets, and he dipped them in pigs’ blood. And he had his men load his rifles, and he lined up the 50 people, and they shot 49 of those people. And the 50th person, he said: You go back to your people, and you tell them what happened. And for 25 years, there wasn’t a problem. OK? Twenty-five years, there wasn’t a problem.”

It’s a story that plays well with his base, but unfortunately, none of it is true.

There’s not a shred of evidence to connect Pershing to mass summary executions, let alone that this somehow miraculously ended the Moro Rebellion.

That’s not to sugarcoat the US occupation of the Philippines. There were atrocities, including the summary execution of captives; the burning of villages; and systematic use of torture, including waterboarding. This was more of a problem early in the conflict, as the Army had little counterinsurgency experience or training. However, the Army eventually adapted.

There are anecdotes of pigskins and blood being used to intimidate people, but there’s no official documentation to support this, and certainly nothing tied to John “Black Jack” Pershing.

Pershing was the most famous US soldier of the early 20th century. He formed and led the US Army in World War I, in France. He also led the cross-border raid searching for Pancho Villa in Mexico in 1916. But earlier in his career, he fought in the Philippines against insurgents fighting for independence after the US seized the archipelago from Spain. These rebels included the Moros, the Muslims in the south of the Philippines.

Pershing was a tough cookie for sure, and doubtless held many common prejudices. However, he was also a competent officer, focused on achieving positive outcomes. He was, in fact, an early practitioner of a "hearts-and-minds" approach to countering insurgency. He avoided unnecessary fighting and bloodshed, preferring to blockade his enemies and force them to surrender. He also disciplined his men to avoid doing anything to provoke what he called "Muslim fanaticism." He knew the key to success was getting guides and information from the local community and eroding support for the insurgents at the village level.

So where does the president get such a notion?

Simply put, it’s an old and persistent urban legend that has been fleshed out with bogus articles on the web that look convincing, citing multiple sources in a semi-academic fashion. But analysis by actual historians has debunked them.

Then of course, Hollywood hasn’t helped. In the 1939 Gary Cooper movie, "The Real Glory," US advisers are trying to train and motivate local volunteers to fight the Moros. In a pivotal scene, the hero uses a pigskin to intimidate a captive and threatens to bury him in it.

The story as told by Trump also fits with the Hollywood vision of war, where a single, maverick hero rides into town, does something dramatic and fixes everything. War is not like that.

The movie was actually pulled from circulation at the request of the War Department in 1942 as the Moros had become US allies in fighting the Japanese, and "The Real Glory" was obviously offensive to them.

So what’s the big deal?

Catching President Trump in a falsehood is not such a big deal these days. However, a variety of interested groups have protested his comment.

In short, the only places this comment will likely go down well are beer halls filled with the ill-informed, and ISIS chat rooms.