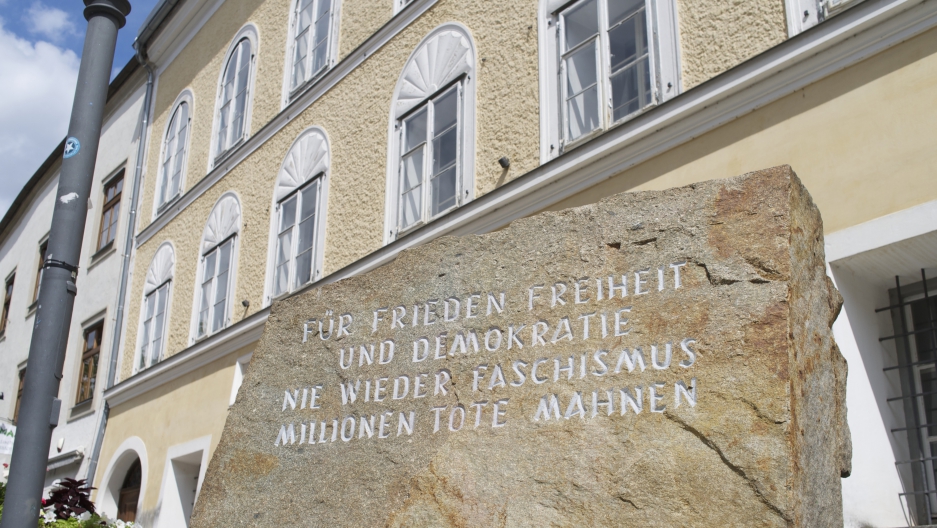 Outside the house in Austria where Adolf Hitler was born there's a block of stone from the Mauthausen concentration camp. It reads "for peace freedom and democracy, never again fascism, remember the millions of dead."

Braunau am Inn would like to be an ordinary town, like its neighbors in this river valley on Austria's border with Germany. But it's not, thanks to an unwanted native son — Adolf Hitler. Hitler was born here in 1889 and was still in diapers when he left. But that's enough for Braunau to still be known as Hitler's hometown.

“If you say you're from Braunau, they connect you with, oh yeah, that's where Hitler came from,” says Christian Gann, a reporter for the local newspaper Braunau Warte. He says Braunauers are not Hitler fans — quite the contrary. But being Hitler's birthplace means they're forever associated with him.

“We have a bad reputation,” Gann says. “It's difficult.”

Braunau sits on the banks of the Inn river, about 40 miles north of Salzburg, the Austrian city famous as the locale for "The Sound of Music." Braunau is nearly as picturesque — a pretty medieval town of 13,000, with a Wednesday street market selling wild mushrooms and local plums. At noon, church bells ring out over a cobblestoned town square. The three-story neoclassical building where Hitler was born is close to the center of town, across from an organic supermarket and next door to a cafe and a Thai restaurant. After World War II, it was used for decades as a public library and later housed a social services agency.

These days, it's vacant, and closed to the public. But in the 1930s, during Hitler's rule, it became a kind of shrine to his cult of personality. Some German schools would start the day with a recitation of his date and place of birth, burning Braunau's name into the memory of a generation of children. Florian Kotanko, head of Braunau's historical society, says, back then, Hitler cultists' veneration of Braunau went even further.

“Some people said, 'No, he wasn't born in the house, he was born in the stable,'” Kotanko says, recalling a 1938 newspaper headline that read, "Braunau, Bethlehem of the Third Reich."

Kotanko lives near the building Braunauers call the Hitler-Haus. He says dozens of people stop by there every day to take pictures. Because of Austrian laws banning the use of Nazi symbols, it's hard to tell which ones are neo-Nazis and which are just tourists. But Kotanko has seen bouquets of flowers left there and once, a burning candle.

“There are people who come to Braunau because they feel sympathy for Hitler's ideas,” Kotanko says. “In one way, we have to live with it.”

Braunau tries to keep the neo-Nazis away. In front of the building, the town installed a block of stone from the Mauthausen concentration camp, with an inscription remembering the millions killed by Hitler. It's placed so you can't photograph the building without photographing the stone too. Every year Braunau pushes back against celebrations of Hitler's birthday, with anti-racism rallies that drown out the extremists.

But the Nazis just keep coming. In February, a man was arrested after he showed up here in a Hitler costume, complete with side part and mustache. Just last week someone posted a Google review of the Hitler house that ended with the words, “Adolf Hitler, we will not forget you.” Local media have reported people scraping stucco off of the building as a relic. On a recent day the side wall looked freshly painted and plastered.

Austria's government has leased the privately owned building for years, to make sure it stayed out of extremist hands. But after a dustup over the lease last year, the state went one step further and expropriated it. Austria's interior minister said Braunau's unloved landmark would be razed to the ground — erasing its dark appeal once and for all.

But given the chance to be rid of the Hitler house, Braunau said no.

Kotanko was part of a government commission to determine what to do with the building, and he says members were in agreement that destroying the building “wouldn't [have] any positive effect.” Even razing the Hitler house would still leave behind the space it occupied, and the memory of what was there. That's what happened when an Austrian cemetery removed Hitler's parents' tombstone from their grave, he says. The attempt to keep it from being used as a neo-Nazi shrine didn't work — now extremists just bring flowers and candles to the place where it used to be.

“You can't destroy the past by destroying a building or statue,” Kotanko says, adding you can't change history, but by being transparent, by providing information and historical fact, you may be able to change people's minds. He says that goes for all kinds of controversial monuments, from Braunau's Hitler house to American statues of Confederate general Robert E. Lee.

“Don't try to hide ... give as much information as possible. And then people will start thinking — I hope — and re-thinking some of their prejudices,” he says. “Anyone who starts thinking will [question] his own positions too.”

Braunau has realized it can't erase its past. But it can work on its future. And in the future, Braunau plans to remodel Hitler's birthplace and turn it back into a center for the disabled.