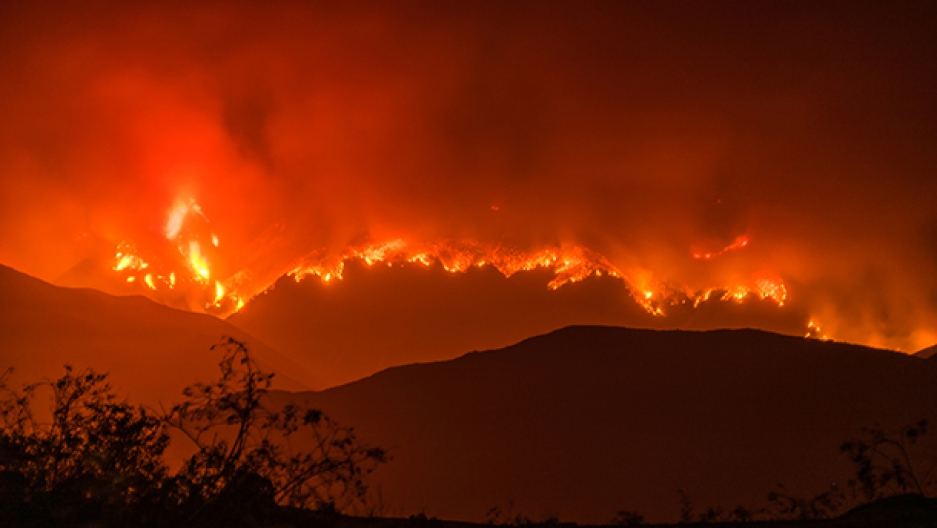 Rising temperatures, partly driven by global warming and longer drought seasons, have turned western forests into easy kindling for raging megafires that could threaten millions of people in the US.

This new, alarming situation has several causes, and a new book lays them out. It’s called "Land On Fire: The New Reality of Wildfire in the West," by nature writer Gary Ferguson.

“Our landscapes throughout the country, but especially in the American West, have been shaped by fire for thousands of years,” Ferguson says. “Everything we see — the shapes of the trees, the way they're clustered, the plants that grow there, the animals that exist — has been shaped by fire.”

In the last 15 to 20 years, however, a different kind of fire has been roaring across the West, Ferguson says. “These are not the natural stand maintenance fires that burned across thousands of years every 10 or 12 years to clean the forest and stem disease,” he explains. “These are bigger and hotter. They're coming more often and they're having a pretty big consequence to both the landscape and the communities.”

Wildfires once took hold only during hot, dry summer months. This year in the United States, more than 2 million acres of land were burned before the first day of spring. The US has experienced a dozen “megafires” — gigantic fire events of 100,000 acres or more — in 12 of the last 15 years. “That’s a profound difference [compared with] what was going on in the late 20th century,” Ferguson warns.

Since 1972, fire season has grown by about 75 days in the West. In fact, Ferguson says, some places in the Southwest are nearly to the point where they're having fires all year long.

Several forces are converging to create a “perfect firestorm” right now in the US West. One is “unnaturally heavy fuel load” on about 300 million acres — a result of about 80 years of overly heavy fire suppression, Ferguson says.

Another is climate change. Warmer temperatures and drought associated with climate change cause mountain snow packs to melt earlier. “As the snow pack melts, not only is there less water available for vegetation, but the ground itself is more exposed to sun and wind. [It] dries out and becomes very, very flammable,” Ferguson explains.

The pine bark beetle, which is responsible for killing millions of trees, has been a part of the Western forest for a very long time, Ferguson says, but winter temperatures used to be cold enough to limit their spread. That’s not the case anymore. “In fact,” Ferguson notes, “not only are they not being killed off, but they've managed to double their reproduction rate in a given summer. So, this creates a lot more insects.”

What’s more, a lodgepole pine would normally have defenses when attacked by the pine beetle, literally stopping the insects from burrowing through, Ferguson says. But, due to persistent drought, that moisture is no longer available, so insects can more easily make their way into the trees.

All of this is happening against a larger and more dangerous backdrop: 60 percent of the homes built in the US since 2006 are located in a type of area called a wildland urban interface — “a complicated title that just means housing developments and businesses that come up against large slices of natural vegetation,” Ferguson explains. About a third of the population of the country, more than 100 million people, now live in a wildland urban interface.

Some 200 million acres are now considered at high fire risk and that's where most of the new development is occurring. Only 3 percent of these areas have so far taken steps to “fireproof” their communities, or to make them more fire resistant, according to Ferguson.

These steps are simple and effective, he notes. For example, some communities invite a local firefighter or forest service to help them thin the forest around a subdivision, lessening the chance fire will spread to their homes. For individual homes, Ferguson suggests the following: Cover a 5-foot perimeter around your house with nonflammable material; put screen mesh over attic vents; and give firefighters a 40- to 50-foot defensible perimeter by cutting away stray bushes and smaller trees.

If these minor steps sound like they won’t make a difference, consider this, Ferguson says: “In the Black Forest fire a few years ago in Colorado Springs, one subdivision that had done these sorts of things experienced a loss of four homes out of 69. Right next door, there was another subdivision that hadn't done anything. They lost 61 homes out of 67. So, it really can make a very big difference.”

On the state and national level, many land managers are now pushing harder for so-called “prescribed burning.” When it's safe to do so, they will light fires to mimic a “stand maintenance fire,” a natural burn, usually caused by lightning, that would occur every eight to 12 years.

These fires would burn at a fairly low intensity — 6- to 8-foot high flames and 1,200 degree temperatures — and would come through and clean up the smaller trees and branches that had fallen, clean up the dry grass and stem the insect invasions, leaving a healthier forest behind. By contrast, today’s megafires might have 150-foot flames and 2,000- to 2,200-degree temperatures.

“We’ve got the smarts. We've got all we need to know to actually do these things. We just simply have to have the heart and the will at this point,” Ferguson insists. “I think, as fires continue to rage in a bigger and bolder fashion, they will continue to knock on our door trying to get our attention, to take all of this very seriously.”