The Red Delicious was first discovered on an Iowa farm in the 1870s. It grew to become America’s most popular apple.

For decades, Red Delicious represented the definition of an of apple. Kids across the nation got them in their lunch bags, and they were ubiquitous on store shelves. But with the explosion in more tasty apple varieties — like Gala, Fuji and Honeycrisp — the Red Delicious has largely fallen out of favor in the US.

Not so in China, though — Red Delicious are huge there. And that’s a big consideration for Washington state growers.

The small city of Wenatchee, Washington, bills itself as the apple capital of the world. Central Washington is a perfect spot to grow them: cold winters, sunny summers and low humidity.

Michael J. Scott has been planting apple trees in Wenatchee since the late 1960s. He used to grow Red Delicious. No longer.

“The orchard we’re standing in right now is Gala,” says Scott. “My son, after he graduated from school, went off and got educated about growing apples. And he came home one day and looked at my Red Delicious trees, which were standing here where we’re at, and said, ‘Dad, this is not going to work.’”

Where his orchard could support 120 Red Delicious trees per acre, if he switched to Gala he could manage nearly 2,000 trees per acre. But not everyone has made such a switch. There are many compelling reasons to stick with Red Delicious, including a big one: China.

David Smith, a Shanghai-based fruit importer with SVA Fruits, says apples from Washington are a special gift in China, and not for their taste.

“[The color] red in China for hundreds and hundreds, if not thousands, of years has been an extraordinarily important color. It symbolizes luck, it symbolizes wealth, it symbolizes happiness. It carries all of these cultural meanings along with it. And so red fruits do very, very well,” says Smith.

Smith, who is originally from Washington state, says try as they might, Chinese farmers can’t grow Red Delicious apples like they do in Washington state. The Chinese ones just don’t look quite right.

“It might look more square or more round, it won’t have that beautiful elongated shape that they like to see in a Red Delicious apple. The color might be a little more muddy, it won’t not be as shiny. It may not be as even-colored as the fruit that comes out of Washington state,” Smith says.

But Smith admits the Washington Red Delicious is slipping in popularity.

“While Chinese consumers still love the red color, they are becoming more and more knowledgeable about the flavor of the fruits. Whereas five, six, seven years ago, when I first started in the fruit business here, people were still buying 95 percent with their eyes,” says Smith. “But in the past few years, we’re starting to see people say, ‘OK, does it look good, and does it taste good?’”

That taste is on Scott's mind, too. Beyond being able to plant more trees, Scott believes he’s now growing tastier apples. That’s tough for a Washington apple farmer to admit, to disparage the Red Delicious, the apple that has long been atop the pantheon of Washington varieties.

“I’ve tasted a lot of apples in my time, and I was a slow learner, but I’m thinking there are several varieties that are season long, more dependably a taste treat than Red Delicious. How’s that?” Scott says with a chuckle. “Judiciously spoken?”

They’re working on these problems in Wenatchee. Horticulturalist and pome fruit breeder Kate Evans with Washington State University walks inside a massive refrigerator filled with apples — it’s her job to taste them all.

“It’s very much like wine tasting. We can’t possibly go through that number of apples and swallow every piece as we’re going through. It would have fairly detrimental effects, I think on our digestion,” says Evans. “Take a bite, chew it around, taste it, score it for different characteristics, and then spit it out.”

So, the big question: Does Evans eat apples away from work, or is she sick of them?

“I can’t tell you how many times I get asked that question,” Evans says, then adds that she generally avoids them outside of the office during growing season.

The new Cosmic Crisp variety being grown in Washington state.

The odds of an apple making it from the testing stage to the grocery shelf are extremely long. There are perhaps 5,000 to 7,000 apple varieties in the world today, but only about 30 to 40 are commercially grown worldwide and slightly fewer in Washington state. Apples are evaluated on taste, appearance, storability, cost, how quickly they rot, and ease of growing.

Despite the long odds of making it, there is one apple Evans has been working on that she’s super excited about.

“I have to talk about the new Cosmic Crisp. I mean, Cosmic Crisp is typically a red apple that is ultracrisp,” she explains.

The new apple is a cross between a Honeycrisp and an Enterprise. It’ll be commercially available in the US within two or three years, and Washington growers are betting that it’ll be a winner — they’ve planted 600,000 Cosmic Crisp trees this year and Evans expects some 5 million more trees to go in the ground next season.

So while the Cosmic Crisp could wow us in the West, who knows how Chinese consumers will react to the new shape and color. Ultimately, that will partially guide business, and growing, decisions in Washington state.

Todd Fryhover, president of the Washington Apple Commission, says the new apple will be “beautiful.” But the old workhorse, the Red Delicious, isn’t going away. It’s exported to more than 60 countries for good reason, Fryhover says.

“It holds up tremendously well in long transits,” says Fryover. “As an example, it takes 45 days to get to India. That’s just in transport.”

While Fryhover insists that China is but one export market for Washington state growers, it’s a big one, and therefore gets a little extra love. Fryhover shows me a cardboard gift box sold in China around the Chinese New Year.

“Here’s our logo on it,” Fryhover says, holding a box and also pointing at some Chinese characters on it. “In a lot of cases, the consumers can go in and choose the apples themselves, pack them into this box, take them home and give them as gifts to people that they love very much.”

If Washington state’s marketing efforts in China continue to pay off, how might those impact growing decisions in Wenatchee? Back at the orchard, I ask Scott if he’d rip up his trees again and go back to Red Delicious if demand, and prices, climb in China.

“Absolutely, yeah,” says Scott. “I think we can do it better here than anybody else can.” 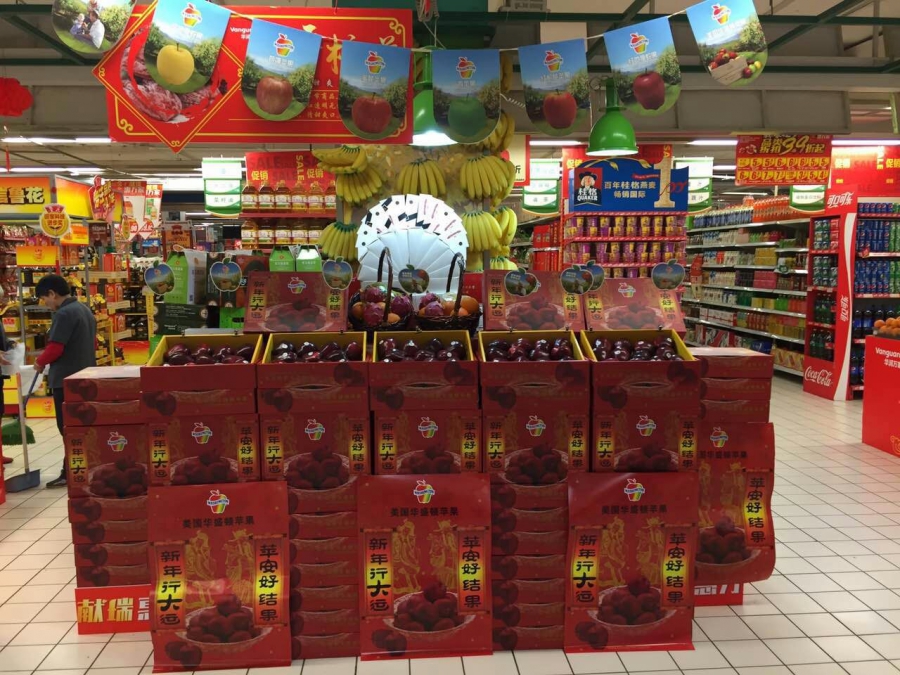 Washington state apples are popular gifts in China during holidays.