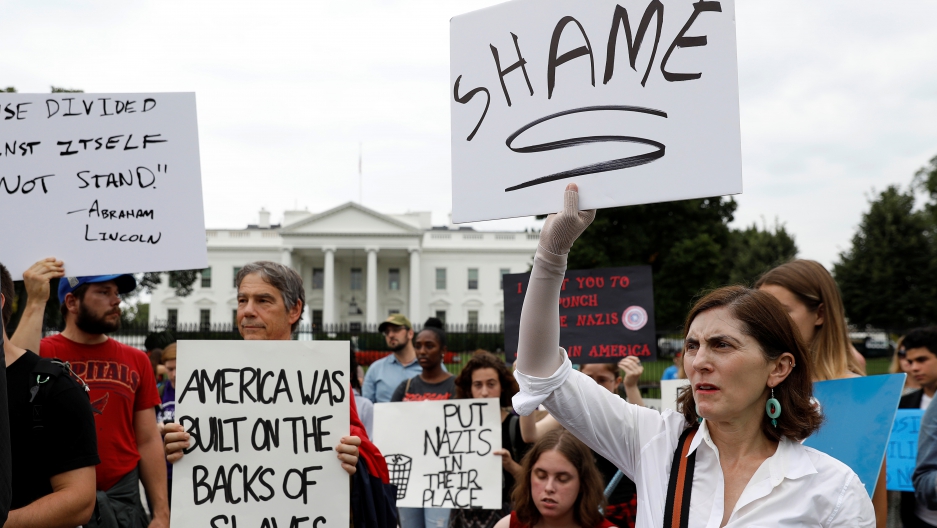 Protesters hold signs in front of the White House in Washington to protest the weekend's violence in Charlottesville, Va., August 14, 2017.

If you’ve been talking to people about hate crimes since the election, like I have, you’d know that Charlottesville didn’t come out of nowhere. People have been priming for a fight for months.

The string of hate crimes across the country has people scared, defensive, a little paranoid, and preoccupied with their own safety. And when President Donald Trump initially failed to condemn white supremacists in Charlottesville, instead saying there was violence “on many sides,” that wasn’t surprising either — because there’s a long history of American failure to acknowledge white hate.

Kevin Coval, a poet in Chicago who’s Chance the Rapper’s “artistic father,” says white people's reluctance to talk directly about things like white violence has allowed that violence to continue. Coval’s white, and runs a youth spoken word program called “Louder than a Bomb,” which is where Chance got his start.

“We have, obviously, a very difficult time talking about race and naming whiteness in this country,” he says. “That itself is a kind of violence. What we're seeing is the maintenance of white supremacist terror.”

But the widespread criticism of Trump for not specifically denouncing white violence — that’s what’s surprising. Even Republicans said he should’ve immediately said more. And I have a theory about why.

I think that the hate incidents against immigrants are raising awareness of white violence that's been directed toward African Americans for a long time, and continues today. And that heightened awareness is making more people fight back against things like a white nationalist rally in Charlottesville.

Here’s my thinking. White violence against black people has been normalized. Over the last year, a big share of reported hate crimes targeted African Americans. But, as a member of the media myself, I don’t think the media are reporting those crimes to the same extent as hate incidents targeting Muslims and Jews. One example: On Chicago’s far South Side last year, Black Lives Matter organizer Kofi Ademola, responding to a police shooting and talking outside with the family of the man killed, was surrounded by whites screaming slurs and threats. Ademola and others in his group had to be escorted out of the area by police. He streamed it on Facebook Live.

“We literally found ourselves in what felt like 1950s Alabama,” he says. “I mean, it was surreal.”

But it didn’t make national news.

Then there’s the problem that the racism African Americans experience is so constant and pervasive that it’s normal, and goes unreported. That’s what a young woman named Natalia Yarbrough told me. She's black, white and Mexican, and she lives in Englewood — one of the most violent neighborhoods on Chicago’s South Side.

"I've never had somebody say something racist to me and I thought you know I think maybe I'll file a hate crime against them. It's almost like the norm,” she says. “Our police are always worrying about murders and guns and domestic violence. Real issues. They don't really come out because somebody called you gay, or Asian or black or Mexican. They almost ignore those phone calls. If I were a police officer I would too."

Immigrants or kids of immigrants, though, feel like they have skin in the game more than ever before. They’re defending their identities as Americans. Take Ana, a daughter of Mexican immigrants who was attacked in May coming out of a memorial service at a friends house in the southwest suburbs. A white woman yelled slurs at her, told her to get out of the country, and punched her in the face.

“I told her I am an American,” she says. “What are you talking about?”

Ana fought the woman. They were rolling around on the ground. The police came, and Ana says the woman kept yelling about her being Mexican. But later the police said they hadn't heard anything. So it wasn’t charged as a hate crime. But Ana didn’t give up. She and her lawyer at the Chicago Lawyers' Committee on Civil Rights are trying to bring a civil hate crime suit.

Here's another example: The day I got to Chicago there was an incident in the news — five girls wearing hijabs had walked into a diner in the southwest suburbs and gotten heckled by an old man. There was video of it — of the man swearing slurs at them and saying, “If you don’t like this country, leave.” The girls reply, “this is our country too!”

The incident was widely covered by TV and other news outlets, probably because there was video. (No one recorded Ana’s incident; I asked about that and she said, “Rupa, we’re not kids. We call 911.”) Watching it, I was struck again by the girls’ instinct to talk back. When I was growing up as the kid of an immigrant in white Iowa, you never talked back. You kept your head down, because that kept you safe.

So I wondered if pushback by immigrants to white violence is escalating tensions. I asked the lead attorney at the Chicago offices of the Council on American-Islamic Relations, Sufyan Sohel.

“Probably,” he says. “Definitely. But I don't think that's a challenge we need to back off of.”

Pushing back, and reporting incidents, make victims feel their experience has been acknowledged, Sohel says, and that’s important for Muslim youth. When they don’t feel heard, that’s one of the factors that makes them susceptible to extremism.

So, some white Americans may not like to talk about white violence and hatred, but for immigrants and kids of immigrants, it can be imperative. They’re forcing the conversation, and the media is reporting about it. Awareness of white violence is growing, and white people who don’t hate are taking action. And maybe, just maybe, those same people are beginning to fully recognize their role in the country’s long history of systemic hate against African Americans, that continues today.

After all, most of the counter-protesters at the white nationalist rally in Charlottesville were white.