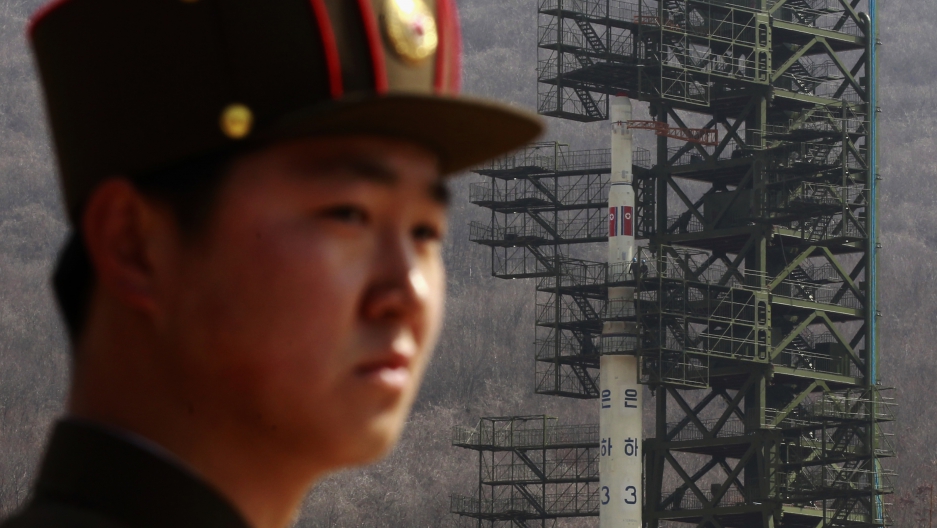 A soldier stands guard in front of the Unha-3 rocket sitting on a launch pad at the West Sea Satellite Launch Site in Pyongyang.

US President Donald Trump doubled down on his warnings to North Korea Thursday, saying his threat to rain "fire and fury" on the nation maybe "wasn't tough enough."

Earlier this week, Trump said North Korea would face "fire and fury like the world has never seen" if it continued to threaten the United States with its missile and nuclear programs.

That prompted a defiant Pyongyang to threaten a missile attack on Guam, a tiny US territory in the Pacific that is home to major US air and naval facilities.

“The words alone are very problematic,” said Joshua Pollack, editor of the Nonproliferation Review and a former consultant to the US government on issues related to weapons of mass destruction.

Pollack says the US would have capacity to intercept the missile if North Korea follows through with its threat. But he says establishing channels of communication with North Korea are key to de-escalation.

“Both sides ... would do well to find other ways to communicate,” Pollack said. “A direct military-to-military hotline would probably be a good idea for crisis management to avoid these problems of slinging warnings and threats back and forth through the media, which can very easily be misinterpreted.”

The heated exchanges between Trump and the Kim Jong-un regime come as new intelligence indicates North Korea has been advancing its offensive nuclear capabilities.

“Ultimately our defense against nuclear attack is not defense at all but deterrence, it is persuading an adversary with the prospect of retaliation that it is not a good idea to attack in the first place,” Pollack said.

John Schindler, a former NSA analyst and counterintelligence officer, says that like all modern governments, the US gets intelligence from many sources — human spies, electronic intercepts, satellites and more.

But getting intelligence on North Korea, Schindler says, can be tricky. The US does not have a diplomatic or commercial relationship with Pyongyang, which means American spies can’t pose as diplomats or business people.

When it comes to electronic intercepts and satellite imagery, “North Koreans have capabilities in what spies called 'denial and deception' — meaning that they know [what the US is doing] and they go to some lengths to fool us,” Schindler said.

All those factors mean that intelligence trickling out of the country can be thin. But assessing the threat from North Korea is and has been a priority of the US government for a long time, Schindler says, and putting together different types of intelligence over the course of months and years has helped the intelligence community understand North Korea's weapons capabilities pretty well.

The intelligence assessment completed last month by the Defense Intelligence Agency found that North Korea can now produce a miniaturized nuclear warhead that can fit inside its missiles.

The report generally has the support of the US intelligence community, but Schindler says viewing the report with some caution is wise — “this does not carry the weight of a CIA assessment, for instance, which has greater prestige and generally better analysis.”

The obvious lesson is the US’s invasion of Iraq in 2003, which was based on faulty intelligence that Saddam Hussein had weapons of mass destruction. At that time, Schindler says, there was a lot of political pressure from the White House “to find a certain answer.”

The situation with North Korea is a little different. “North Korea is much further down the nuclear road than Saddam's Iraq ever was,” Schindler explains.

And there’s less a question of whether North Korea has nuclear capabilities — the real question is if it can be weaponized yet. “If they are within even less than a year of miniaturizing a warhead to put on an ICBM or medium-range ballistic missile,” Schindler said, “I think that is a very serious problem.”