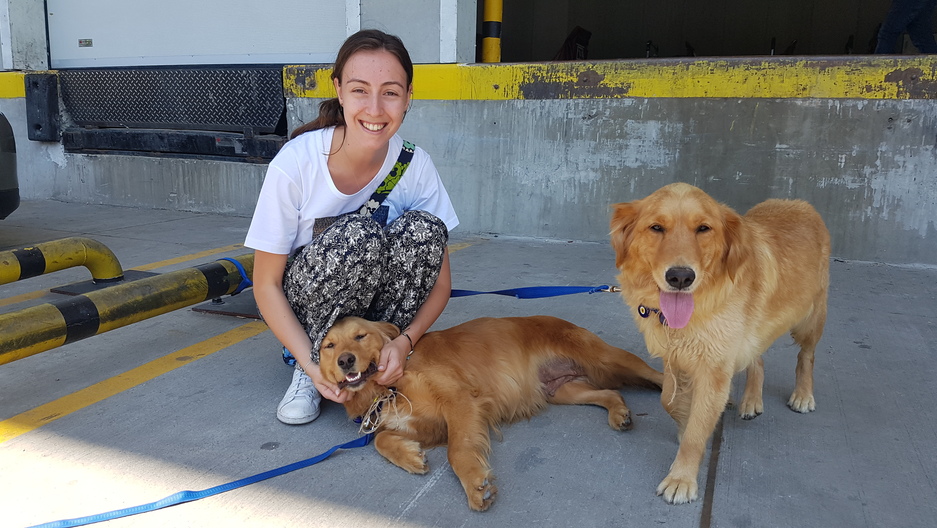 Golden retrievers Atlanta, left, and her sister, Phoenix, lounge with a volunteer outside the cargo hall before leaving Istanbul.

It’s almost 6,000 miles from Istanbul to Atlanta, and it’s going to be a long flight. The passengers on this flight really need to stretch their legs — all four of them, to be exact.

This is not the departures lounge; it’s the Ataturk Airport cargo hall, a vast, echoing hangar full of forklifts, packages and 18 empty dog crates. They’re slowly being filled by golden retrievers whose hues range from pearly white to burnished bronze. The dogs seem a little overwhelmed by the airport, but they’re cooperating.

Helping oversee the efforts is Edna, a middle-aged volunteer who's been rescuing dogs for 15 years. She doesn't want to use her last name to avoid attracting attention from people in Turkey who aren't fans of sending the dogs to the US. “Go ahead, go ahead,” she says in Turkish to one volunteer who’s walking an enormous ash-blond golden. “Clara is going in a big crate because she’s fat,” Edna says, amused. “We have an obese Clara. She’s going in a suite.”

For two years, Edna and her fellow volunteers have been coaxing these dogs into crates to go to America. This month, they did it for the 1,000th time, with a light golden named Atlanta. She was found in May as a 9-month-old puppy in a forest outside Istanbul, but she’s close to full size now. The other dogs have all-American names like Army, Navy and Flag, but not all of the American references translate. Edna waves me over. “Spangle, what does Spangle mean?” she asks. 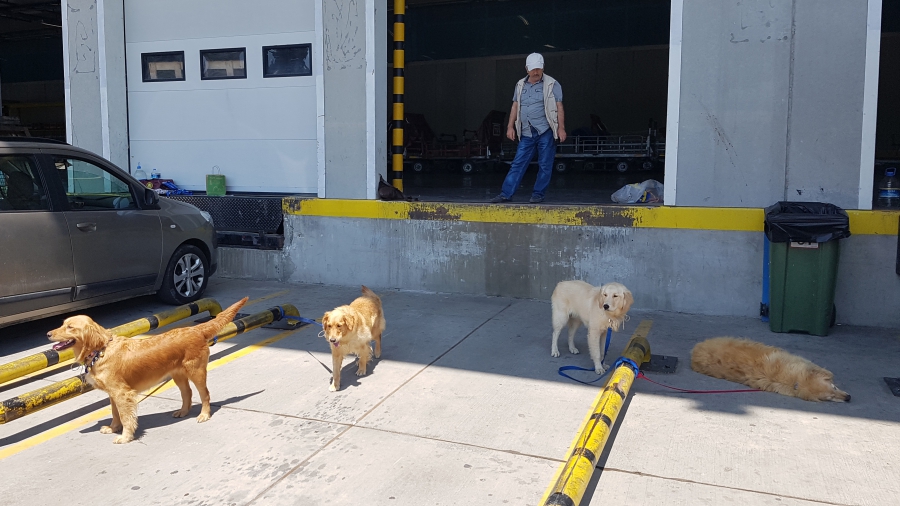 The dogs stretch their legs on their last day in Istanbul.

Atlanta is the star of this group, and she lies down on the concrete floor as people snap photos. She’s named for her new home, the first American city to take in goldens from Turkey. Lauren Genkinger, the founder of Adopt a Golden Atlanta, got involved after an American living in Turkey got in touch. Genkinger says she had no idea what she was signing up for: “I was sort of under the impression there was maybe 20 [dogs].”

On their first transport in 2015, they brought over 36 dogs, making it the largest ever international rescue of golden retrievers. 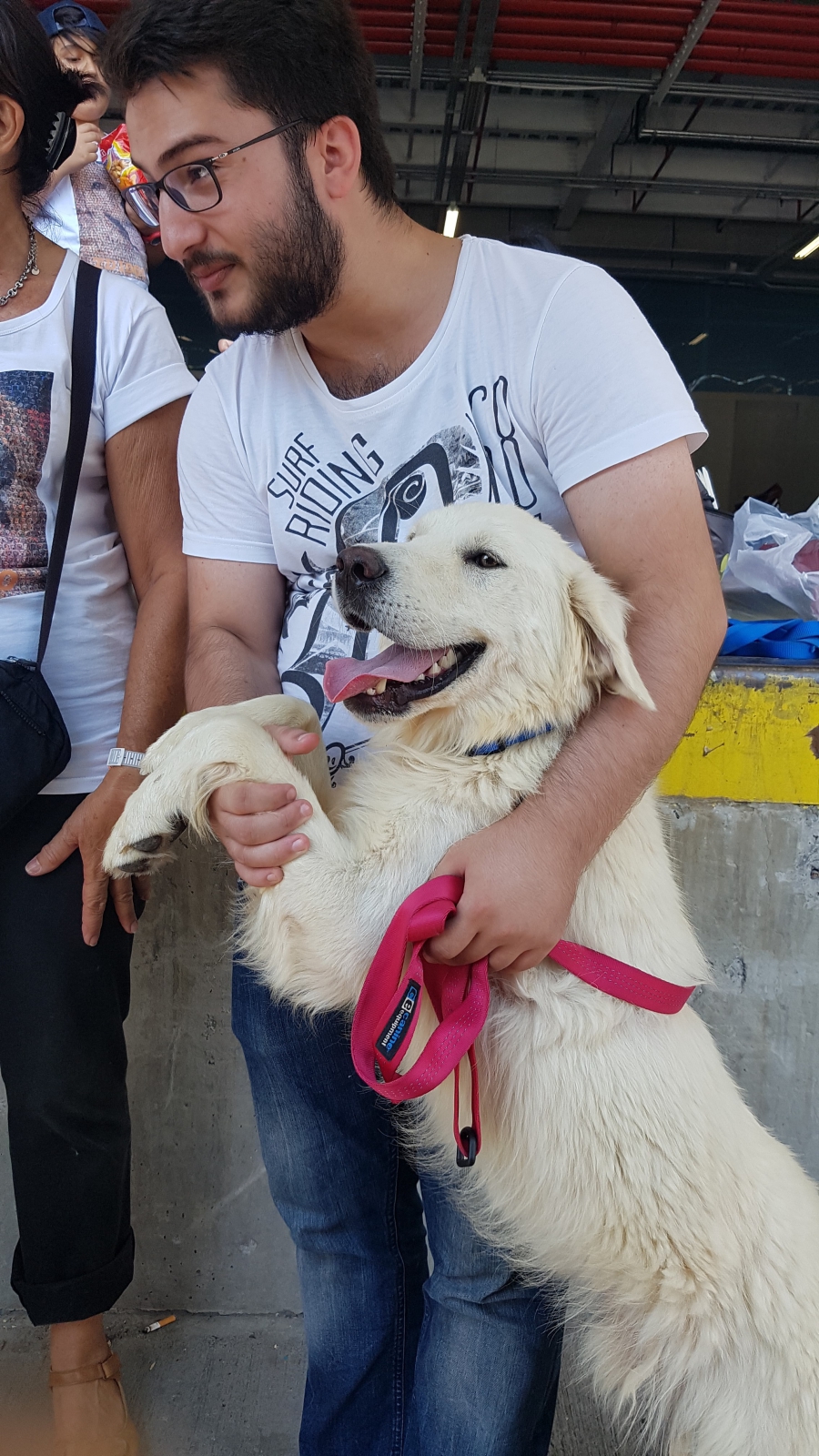 Volunteers play with the dogs outside the airport in Istanbul.

There’s plenty more where they came from. In Turkey, goldens are a status symbol and they make trendy presents. But people don’t realize quite how much love, attention and fur they are signing up for, and many dogs end up abandoned. Adoption is not a big thing in Turkey, so the dogs are not likely to find a home after they grow to full size. Turkish shelters have pens full of goldens waiting for a home.

Meanwhile, in the US, “there’s 95 rescues in the country and every one of us has waiting lists for adoptions for a golden retriever,” Genkinger says. Two years later, there are Turkey dogs, as Genkinger has dubbed them, in 15 US states and Canada.

Istanbul is home to 100,000 stray dogs by some estimates, and they don’t receive nearly the same amount of love and attention as their street cat neighbors.

“We are very few [who] really love dogs,” Edna says. “Most of the population likes dogs, but from afar. They don't want to have them in their houses, they think they are dirty.”

But at the same time, many neighborhoods in Istanbul live side by side with the dogs, leaving out food and water for them, and taking them in during storms. Genkinger says in her experience, it makes the dogs better socialized than rescues from some other countries. But Edna says that sunny disposition can make it tough to for these dogs to survive.

“[Goldens] are calm,” she says. “They don't know how to fight for their food, and when big dogs approach the food the golden retrievers run away.”

With Atlanta and her fellow travelers loaded away, the Turkish volunteers say goodbye. The next evening, Genkinger and her team in Atlanta are there to greet them.

“These dogs are wonderful when they get here, you wouldn't believe how happy,” Genkinger says. “They start barking as soon as they see us ... they get to get out of their crates and run around in a fenced-in field with the grass of America below their paws.”

Now, you might be thinking it feels a little strange to roll out the welcome mat for nonhuman immigrants when Turkey alone is hosting 3 million Syrian refugees. And it’s not lost on the Turkish volunteers how lucky these dogs are. More than one Turkish volunteer pointed out that it's a bit funny to be helping send dogs to the US when they themselves might apply for a US visa and get rejected. But the way Edna and Genkinger see it, none of that means these dogs shouldn’t have a better life.

“I don't even think that dogs and humans are different, but I have chosen to help dogs. We get this question all the time,” Edna says. So, she turns the question around, asking “What do you do about Syrians?”

But Genkinger says even canine immigration comes with a headache of paperwork. “They do have their passports. They are healthy, and we are following all of the laws. So, they are legal immigrants,” she says. With all the screenings the dogs go through, it can take seven months before they’re in a permanent home. And there’s cross-cultural training to do, as well.

“We say they're bilingual,” Genkinger says. “[Our volunteers] have taught us all of the basic commands for training dogs, such as sit is otur, gel is come, top is ball. They don't seem to know that,” she muses. “I don't know if they have a lot of tennis balls over there.”

Despite the language barrier, Genkinger says most of the goldens adapt easily to their new home. And the dogs don't seem to know they've crossed half the world to get there.