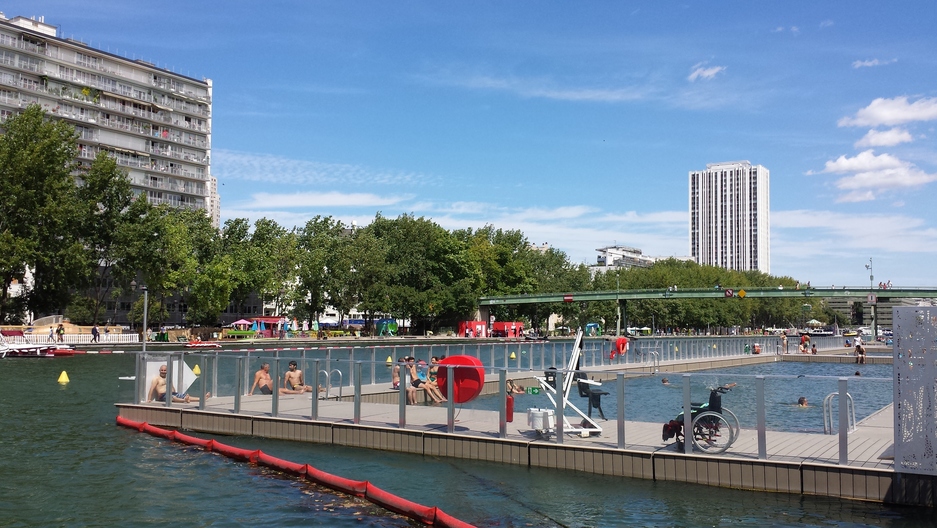 The new swimming area in the Bassin de la Villette section of the Canal de l’Ourcq in northern Paris.

Paris has always been generous to its summer dwellers. Fifteen years ago, it launched Paris-Plages, a beachlike setup on the Seine river to entertain Parisians who can’t get away during the summer months.

The riverbank expressway shuts down for a month to make room for chaise lounges, umbrellas, kids’ games, concerts, pop-up restaurants and cafés.

This season, after years of painstaking water cleanup and testing, the city is innovating again by offering a free swimming spot, in a canal.

When you arrive at the mouth of the Bassin de la Villette, a section of the Canal de l’Ourcq in northern Paris, you see lots of river ships, canoes and pedal boats. Now go in a little farther and you can see swimmers too, in floating pools — three pools in fact — lined up against the riverbank.

There’s a little bit of a beach there, too, and a sleek facility, all free for visitors. It’s part of Paris Mayor Anne Hidalgo’s dream to create clean, open swimming areas in the city.

The canal water flows through the pools, which have a brownish-green tinge, and some algae floating around. Two little children are playing in the kiddie pool as their mother, Aisha Brahmi, watches on.

“The water is good,” Brahmi says. “Good temperature, but the bottom is slippery because there’s a bit of mud everywhere. It’s a little risky on the steps.” 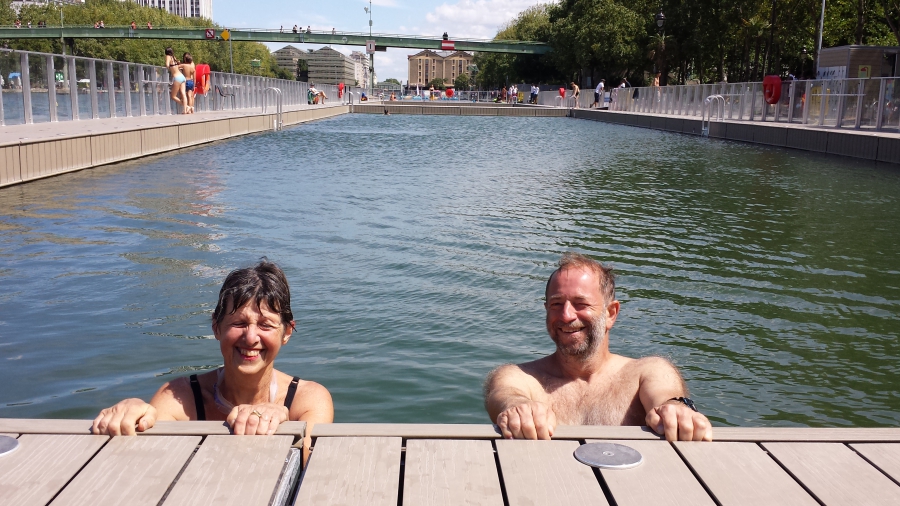 Joëlle Demarque and Jean-Michel Lavoisier have been swimming in the pools every day since they opened.

The floating structure includes a 50-meter pool for serious swimmers. And teenagers love it. They dive and jump in as fast as they can.

The pools can accommodate 300 visitors at a time and, with this summer’s heat waves, people have been lining up to get in.

Sabine Afassi is a German tourist from Berlin. Today, she decided to take a break from the crowds and sightseeing.

“Because when you’re in the middle of the city center, it’s always very busy and stressful, and so, I thought it would be great to come here with my children. But now my children just lay there, it’s too cold for them,” she laughs, “and I’m swimming here alone.”

Thierry Alexandre is the facility’s manager. He says the cool water is untreated but closely checked.

“We have a testing station upstream,” he says, “where the water is checked every half hour, and we get updated results.”

Last week, the pools had to shut down for one day because heavy rainfall washed too much pollution into the canal and made the water unsuitable for swimming. There are signs at the facility’s entrance warning visitors that, as with any open water swimming, there could be occasional bacteria. It urges people to see a doctor if they come down with flu symptoms after swimming here.

So, the city’s Alexandre has a bit of advice: “I’m not going to urge you to drink a full glass of water from the canal,” he says. “A sip is probably OK, but it’s untreated, so there’s no guarantee that if you drink a whole liter, you won’t end up having some tummy disturbance tonight.”

None of this fazes a couple in their 60s who are beaming with joy in the large pool. 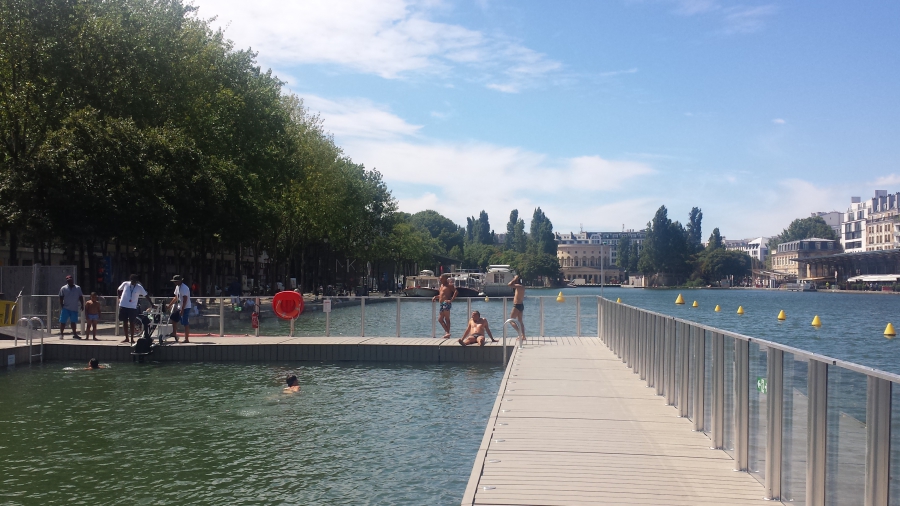 One of the canal pools in the Bassin de la Villette in Paris.

“It’s extraordinary,” says Joëlle Demarque, who lives in the neighborhood. “We’d love it to be open even longer hours. Imagine, a 50-meter pool in Paris!” Her companion Jean-Michel Lavoisier says they used to swim in rivers, so they are fine with the risks. “Look,” he says, “we come here every day, and we’ve had no problem.”

They say it’s smart to provide a swimming spot for everyone rather than having kids waste fire-hydrant water on the streets when it gets too hot. And as City Hall likes to point out, it’s a great example of making the most of Paris’s riches.

In fact, it’s the mayor’s dream to make more waterways — including the Seine — suitable for swimming in the future, especially as Paris is set to host the 2024 Summer Olympic Games.