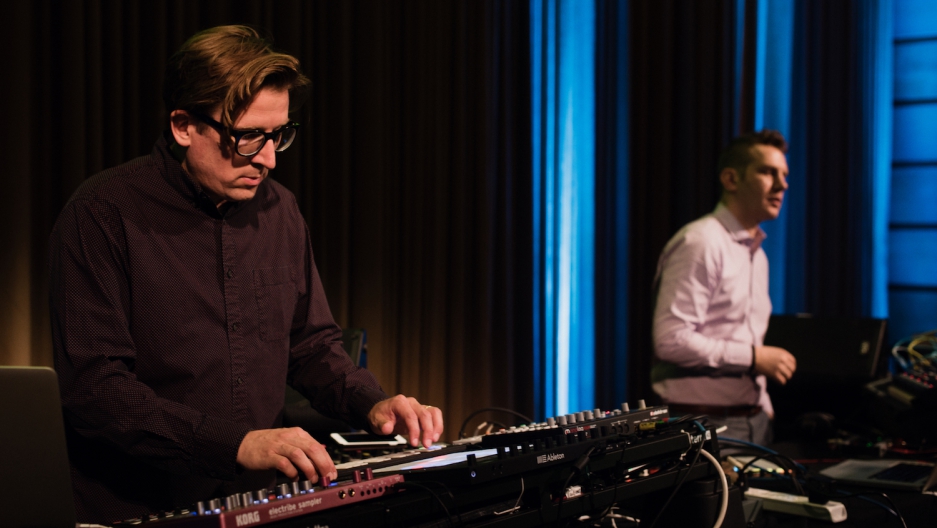 You may not know what a Quindar tone is, but you have definitely heard one.

Quindar tones are the beeps heard in the background of famous space communications, like Neil Armstrong’s “the Eagle has landed” message to Mission Control when the lunar module first reached the moon.

The tones, named after the company that made the equipment, were generated by ground control to turn on and off the radio transmitters used to talk to astronauts. Recently two musicians, Mikael Jorgensen and James Merle Thomas, have taken inspiration from these tones and other sounds from NASA’s audio archives to create a new musical album, called Hip Mobility.

Jorgensen, when he’s not exploring the bleeps and pings of NASA, is keyboardist for the band Wilco. Thomas is a musician and art historian based in Philadelphia.

Thomas describes the genesis of their project this way: “[W]hen I was finishing my doctorate [in 2011, 2012], I was working as a fellow at the National Air and Space Museum, and I was looking at how artists and architects were collaborating with engineers at NASA to design for space. In other words, what it meant to build something like the interior of Skylab, as a kind of house that would be different from a regular spacecraft.”

“When I was researching that material,” he continues, “I started encountering a lot of archival stuff — old industrial films, archival audio. It’s not the stuff of the heroic missions that we always think of. It wasn’t the countdowns. It wasn’t the triumphant sound clips. It was really the mundane stuff of every day. It was tape hiss. It was microphones that were left on. It was people talking about what it felt like to live in space for a long time. It felt almost like a deep portrait of what it meant to live at that given moment in a very unique place. I thought that would make an excellent starting point for telling a story or making some compositions using those sounds.”

Jorgensen says that when he and Thomas began to collaborate, they would text each other in-between writing sessions. He recalls asking Thomas, “What are those sounds? What are those beeps called?” When Thomas told them they were called Quindar tones, Jorgensen knew immediately that would be the name of the project.

“Then we further discovered what a Quindar tone was,” Jorgensen says. “It is a ‘handshake’ between telemetry systems that keep Mission Control and spacecraft communications open. It’s sort of like, ‘Are you there?’ And then the spacecraft answers, ‘Yeah, I’m here. Are you still there?’ And back and forth.”

He says it reminded him of how he and Thomas communicated musically.

Thomas says that the first part of making the Quindar record was “sitting around listening to hours and hours of archival audio.” But one the things he noticed right away was a small difference between the two Quindar tones. They sound at two different frequencies. “They’re not a musical interval apart,” Jorgensen explains, “but they are something like 100 Hertz different from each other.”

“We were struck by the fact that this is basically a synthesizer that NASA is playing,” Thomas says. “It is a kind of a complex note structure that’s being beamed out into the ether. So, we immediately started thinking, What if we push and pull with this fixed industrial standard and think about it less like a precise measure of communication and think about it more like an expressive instrument?”

“It was a really short path from that way of thinking to thinking about what was happening with synthesizers at this same moment,” he continues. “What were composers like Stockhausen or John Cage doing when they were using similar devices to create sounds?”

“The advances that were made due to space agency funding directly inspired and made technologies available for commercial synthesizer apparatus, the Quindar module being a prime example,” Jorgensen adds. So, for him, as a lifelong space lover and the son of a recording engineer, the “intersection of NASA and electronic music was a logical extension of all of those interests.”

Another good parallel to their work would be an artist like Robert Rauschenberg, Thomas says. Rauschenberg was invited by NASA in July of 1969 to travel to Cape Kennedy and witness the launch of Apollo 11.

Rauschenberg was an official guest of the agency and, along with a number of other artists, he was asked to provide some kind of interpretation of the experience.

“Rauschenberg didn’t set up an easel and paint like everyone else,” Thomas says. “He immediately started rooting around in the engineers’ trash cans and found schematics and blueprints and tourist maps from Cocoa Beach. He really upended the narrative that NASA was trying to create, and made a wild, kaleidoscopic set of collages, called Stoned Moon.”

“I think there’s something in the spirit of rewriting a narrative, of maybe thinking differently about the way a countdown works, or the way that we’re told a story, and to reshuffle the order in which it’s told,” Thomas says. “I think there’s something in that way of thinking that really informed the way that we were thinking about composition on this album.”