Soldiers of the Royal Indian Army Service Corps were captured in France in 1940.

"Dunkirk" has been the surprise box office hit of the summer. It recounts the tale of how the beaten British army escaped the Germans at the beginning of World War II, from a beach at Dunkirk, in northern France.

It’s a surprise hit in the US considering the fact that there's not a single American character in it. America wouldn't even be fighting in northwest Europe for another four years.

But it’s not the absence of an American angle that has caused a minor stink. Commentators in Britain and India are complaining that no Indian soldiers are portrayed in the movie.

The knee-jerk response from most Brits and historians is to scoff and say that’s because they weren’t there. It makes no military sense to ship soldiers from India to France. There’s no popular memory of colonial troops there. Even the Ministry of Defence in London initially rejected suggestions that Indian troops were there.

But they were. Four companies of the Royal Indian Army Service Corps (RIASC), plus headquarters and support detachments. Perhaps 1,000 men.

And their service has literally been whitewashed out of history.

When the British army went to France at the beginning of the war, it was a totally mechanized force, which was revolutionary for its time. But as soon as they got into the field, they realized they were having a problem moving supplies and equipment over rough ground. So, the call went out to the empire for animal transport companies.

The empire at the time included India and what's now Pakistan, and a force was assembled — labeled K6 — to provide the vital role of mule and horse transport.

These men were not frontline soldiers, but they were all long-service professionals in what was an all-volunteer force. They were trained to fight, and in the chaos of the Battle of France in May and June of 1940, they did fight, took casualties and some of the men were decorated for bravery.

These included Jemadar Maula Dad Khan who was awarded the Indian Distinguished Service Medal for gallantry. His citation reads:

"On 24 May 1940 when approaching Dunkerque, Jemadar Maula Dad Khan showed magnificent courage, coolness and decision. When his troop was shelled from the ground and bombed from the air by the enemy he promptly reorganised his men and animals, got them off the road and under cover under extremely difficult conditions. It was due to this initiative and the confidence he inspired that it was possible to extricate his troop without loss in men or animals."

The K6 soldiers were noted for maintaining their discipline and cohesion through the chaos so well depicted by Christopher Nolan in his movie.

A further two animal transport companies were recruited from Cyprus, another British possession, in the eastern Mediterranean. But these men weren't armed.

The Indian soldiers of Force K6 were all Muslim. This was a deliberate decision, to simplify logistic and spiritual support needs. Hindus, Sikhs and Muslims have different rules on food, so only one group was selected. They were mostly Punjabis, with a few Pashtuns, and most were from districts that became part of Pakistan at independence in 1947.

Most of Force K6 was evacuated from Dunkirk. But one company was captured. It was serving with a British division that had been assigned to serve on the Maginot Line in eastern France. They could not reach the coast in time to be evacuated.

At least one of the captured Indian soldiers escaped from the Nazis —  Jemadar Jehan Dad. He disguised himself as a French colonial soldier and eventually reached the British colony of Gibraltar. He had served 26 years in the British Indian army at the time of his capture, an illustration of the long service typical of this detachment. Here’s the intelligence report of his escape. 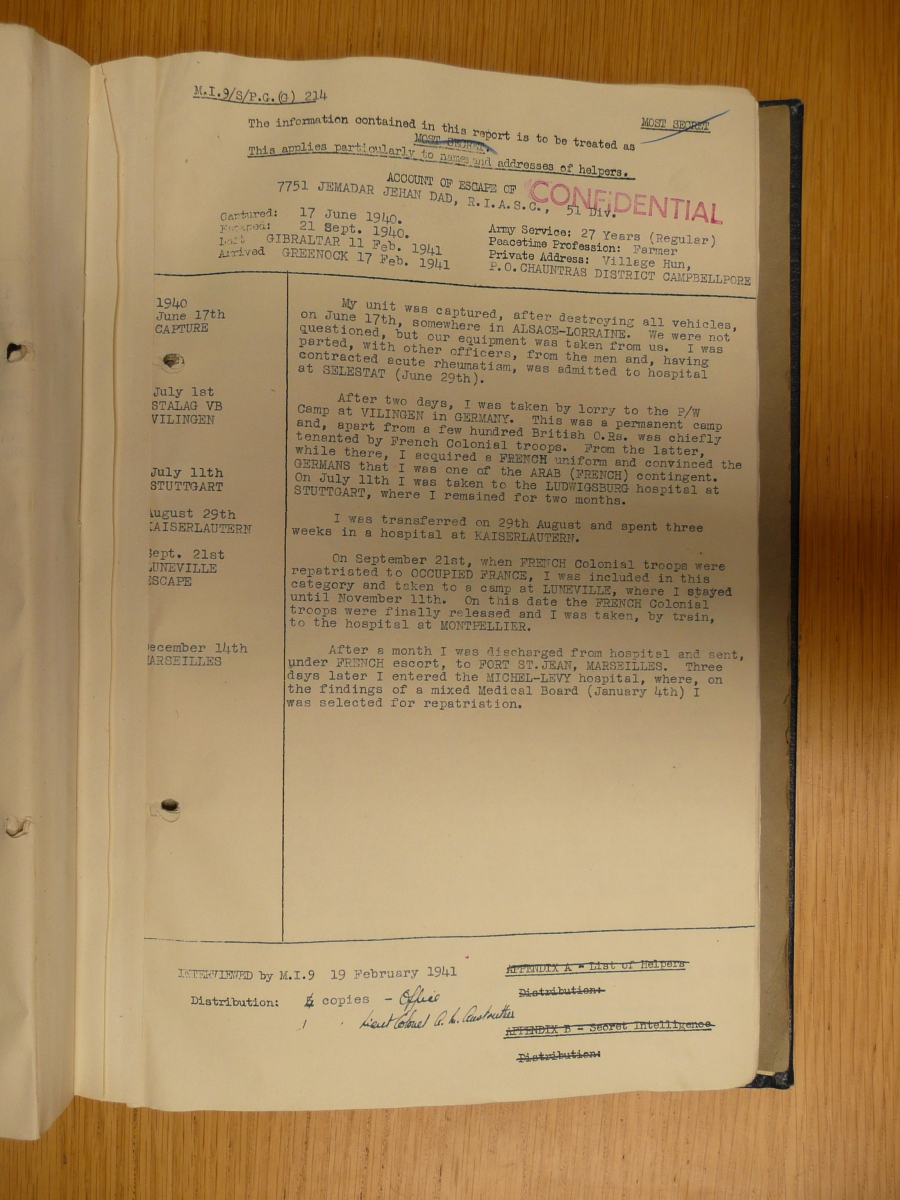 This is the British intelligence report on the escape of Jemadar Jehan Dad.

Those who evacuated from Dunkirk in 1940 stayed in the UK until 1944, when they were sent back to India. Some 35 of these Muslim Indian soldiers died while stationed in the UK and buried there. 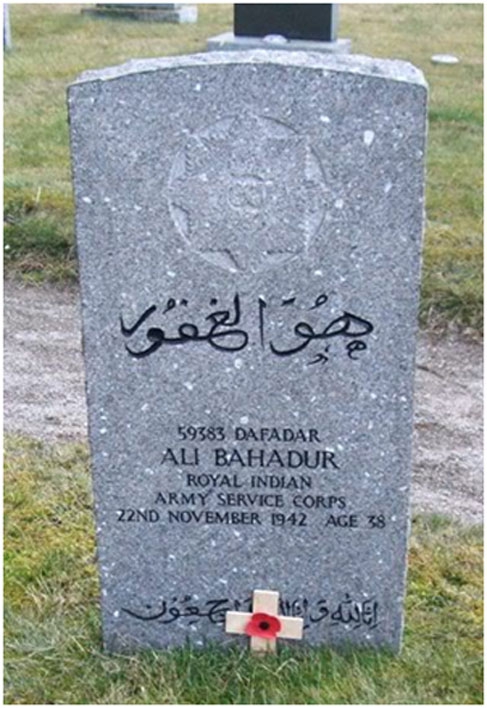 This is the grave of one of the 35 Indian soldiers from Force K6 who died while stationed in the UK, after Dunkirk.

Once back in India, they joined the campaign in Burma, fighting the Japanese.

Their hardworking mules and horses were not so lucky. The mules, all 2,700 of them, had come from India without loss. But they could not be evacuated with their handlers and were abandoned or, where possible, destroyed, to prevent them falling into the hands of the enemy.

There’s no documented explanation of why the memory of these men was erased. But there is the propaganda about Dunkirk, which was deliberately cultivated by the British government.

The “Dunkirk spirit” was so much more than the movie portrays. It’s the spirit of resistance to the Nazis. Dunkirk symbolized the notion that the Brits weren't going to give up just because all their allies had been crushed and beaten. Keep calm and carry on. Plucky little Britain was going to carry on the war by itself. So, having all these imperial contributions complicated that narrative. There is also the reality of racism.

Also, as a support unit and not a combat unit, the K6 companies are not routinely included in the lists that you can find on units that took part in a campaign. So, they are hard to find, as well.

The troops of Force K6 were not the only men of color in the Battle of France. A significant proportion of the UK’s merchant sailors were of Indian origin, so would likely have been present in the merchant ships used in the evacuation from Dunkirk. There was also a small black and Asian population in the UK, about 28,000 out of 48 million. Proportionately, that should have meant there were maybe 250 men of color amongst the 430,000 British troops who took part in the Battle of France. There were far more men of color in the French army, with thousands from the French colonies of Senegal, Mauritania, Morocco and Algeria.

The contributions of the empire to the British war effort in World War II is, overall, well-known and honored over there. But clearly, that participation has failed to break into the Dunkirk myth until now. It's actually even less well-known in India, says Raghu Karnad, an editor at The Wire India and author of "Farthest Field: An Indian Story of the Second World War."

"When I was a teenager, I was a big World War II buff, and later in my life, I've been a journalist and I fancy that I know quite a lot about India's modern history. And yet somehow, until a couple of years ago, it never occurred to me to think about how the two overlapped. It was only a family connection that I explored in my book that revealed to me that India ever had a part in the second World War."

Britain and India both had separate reasons for setting aside this piece of history: "In the decades since World War II, Britain has cherished this image of itself as the brave little island that stood up alone to global fascism, and that's the image that kind of beams out of a movie like 'Dunkirk.' What that image does is that it redeems the prior history of Britain. It's been an inconvenient fact that as they fought fascism in the name of freedom, Britain was itself dominating hundreds of societies around the world.”

"And in India, when we think about those years — particularly the early 1940s — what we want to think about is a country that’s unified in fighting against the British Empire because that was the peak of India’s freedom movement. And it's difficult to remember that so many Indians, especially the army, were fighting for the British Empire at exactly the same time.

Karnad wasn't exactly moved by the new "Dunkirk" movie, or by its exclusion of Indian characters.

"It's been done before, it replays a script about Britain in the war that we've heard a hundred times," he says. "Why are all of the movies that we see about events like Dunkirk? How come none of them are about this much larger [but] still glamorous, still heroic history in which Indians and other [colonial] forces did play such a significant role?"

"A movie that's very close to my heart for that reason is the 'English Patient,' because it's about the Italian campaign, and it's one of the few novels and one of the few movies that has a memorable character who's an Indian soldier in the second World War."

"When you look at the world war through the eyes of an Indian soldier, the globe sort of turns, and you discover all these new continents, all these new campaigns, that aren't part of the popular history of World War II. And many of them are quite marvelous and well worth exploring."