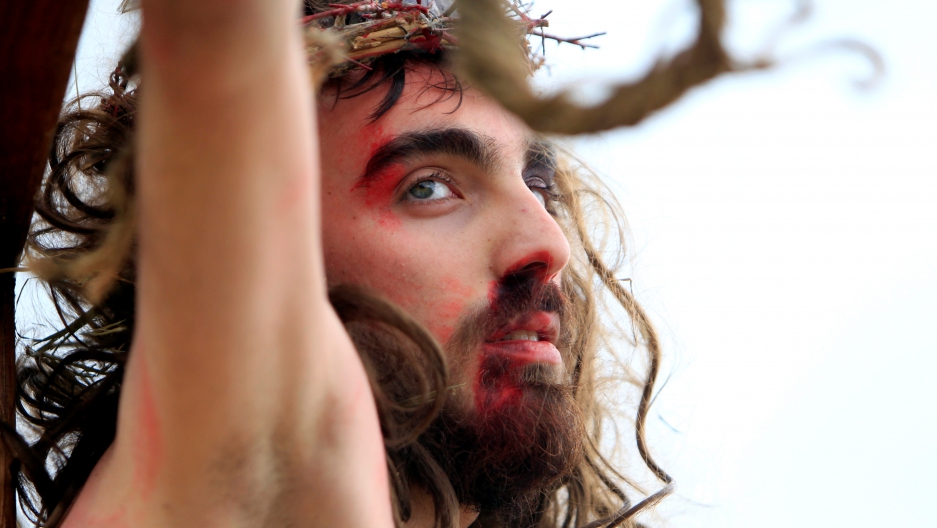 A Christian man, portraying Jesus Christ, is hung on a cross during a re-enactment of the crucifixion of Jesus Christ on Good Friday in al-Qraya village, in southern Lebanon, on April 14, 2017. Muslims also revere Jesus as a prophet. In the Quran, the story of Jesus describes him as a messenger, a messiah and the “word of God.”

Newcomers to the Quran might be surprised to find that the Prophet Muhammad is only mentioned a handful of times in the Muslim holy book.

The prophet whose name is mentioned most? That would be Moses — indeed, the very same Moses from the Book of Exodus.

Jesus, the son of Mary, is mentioned numerous times in the Quran. And the Islamic version of the Jesus story, it turns out, tracks quite closely to the one that Christians know.

The Quran has a whole chapter about Mary, who is the only woman mentioned by name in the holy book.

In one scene after the birth of her child, Mary is confronted by holy men accusing her of being impure. That is when baby Jesus speaks up in his mother’s defense, performing one of a couple of miracles that never show up in the New Testament version of the Jesus story.

About 15 years ago, the Turkish writer Mustafa Akyol was handed a copy of the New Testament for the first time by a missionary on the street in Istanbul. Akyol says he went home and started reading it, and what struck him most was how much of the story of Jesus was already so familiar to him as a Muslim.

Such as the angel visiting the Virgin Mary to tell her that she would give birth to a son, and the description of Jesus as a messenger of God.

“It was so similar,” Akyol says.

The author took out a pen and started underlining the passages about Jesus in the Bible that he agreed with as a Muslim. Those sections turned out to be extensive. And they prompted Akyol to start working on his new book, “The Islamic Jesus: How the King of the Jews Became a Prophet of the Muslims.”

While both the Quran and mainstream Muslim teachings emphasize the importance of Jesus as a prophet, Akyol is going a bit further.

“I’m saying [to my fellow Muslims], let’s learn about Jesus by reading the New Testament, as well,” says Akyol, who is currently a visiting fellow at the Freedom Project at Wellesley College in Massachusetts.

Akyol admits that calling on Muslims to spend more time thinking about Jesus, and even reading Christian scripture, might be too much for some Muslims. But he says this is something the Quran itself advocates.

“The Quran repeatedly speaks of Jews and Christians as people of the book, and in one verse it says, ‘Go and ask them,’” Akyol says.

But when it comes to Jesus, there is also a bright red line in the Quran. One such passage reads, “the Messiah, Jesus, son of Mary, was nothing more than a messenger of God.”

“So believe in God and His messengers and do not speak of a ‘Three’ — stop it, that is better for you — God is only one God. He is far above having a son,” the Quran goes on to say.

This all means, of course, that ultimately Christians and Muslims simply do not agree on the nature of Jesus. Akyol is not trying to erase or diminish these sorts of distinctions.

And that is important, says Celene Ibrahim, a Muslim chaplain at Tufts University. Lately, Ibrahim has been speaking with church groups about Islam and the Muslim understanding of Jesus. But she says there are still more theological similarities than differences between the Islamic and Christian depictions of the prophet known in Arabic by the name Issa.

“I explain how the Quran talks about him as ‘the word of God,’” Ibrahim says.

“That’s a very miraculous thing that is beyond my possible comprehension. I also talk about how the Quran talks about [Issa] as ‘one drawn near.’ And so this idea really resonates with the Christian audience, with all the imagery of sitting at the right hand of the Father.”

Akyol says he has received a lot of positive feedback on the book. But he’s also faced criticism from some fellow Muslims.

“I got one harsh criticism in Turkey, from a newspaper that I call hardcore Islamic nationalists,” Akyol says.

“They want to deny everything that is Western, and Christian, so, they were not happy with the fact that I referred to the New Testament.”

Remember, he says, Jesus was a Jewish reformer. For Christians, he is the son of God. And he is also seen by Muslims as a prophet. There are plenty of geopolitical tensions dividing the three Abrahamic monotheistic faiths, Akyol says. But they still have a lot to learn from each other.