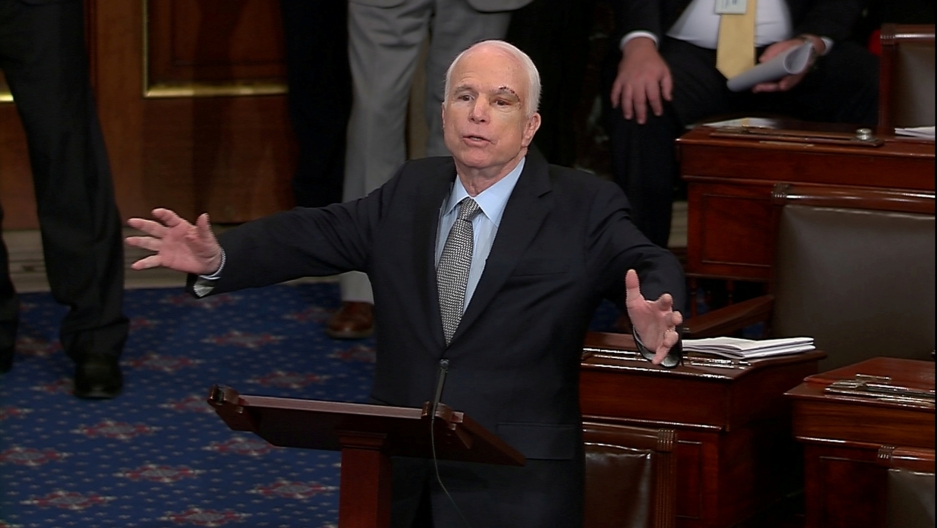 Arizona Republican Sen. John McCain is shown speaking on the floor of the US Senate after being diagnosed with brain cancer.

Sen. John McCain described America as a "beacon of liberty and defender of the dignity of all human beings," in an impassioned address on Tuesday.

So what does that sound like to the rest of the world, especially in the Donald Trump era?

"In countries like China, countries like Russia, they point to America's political woes at the moment and they say, 'You see, we told you this messy Western democracy, it was never a good idea. They can't take decisions. They're completely stuck,'" says David Rennie, DC bureau chief for The Economist.

Still, Rennie says even in parts of the world dismayed by American arrogance or meddling, when Washington's leadership is entirely lacking, it's missed because of the model it presents. And that, Rennie says, is an argument McCain tried to drive home to his fellow lawmakers.

"That's the bigger point [McCain] is making about American leadership being not just about America, but about the rules-based order, about making other smaller countries feel that there is a referee, that there's a global policeman," he notes. "That is a really serious point that resonates well beyond the Senate chamber."

Rennie says "Atlanticist" leaders, like Germany's Angela Merkel or the British government, have felt "orphaned" and "bereft," with the advent of the Trump White House.

"They worry greatly about an assertive China, about an assertive and aggressive Russia," he explains. "They understand that the American public is quite reasonably tired after years and years of fighting the war on terror. They understand that. But the idea that America has no interest in alliances and is skeptical about the value of things like NATO, that really worries foreign governments."

Rennie also highlighted the importance of McCain's comments about the role of checks and balances in the US system of government, and the slow and deliberative way legislation is typically crafted.

In May, Rennie landed an interview with President Trump. He said that his takeaway then was that a moderate, globalist viewpoint was not represented in the White House. And Rennie hasn't seen a change in thinking in the Oval Office since then.

"Donald Trump's message to his supporters about America's role in the world has fundamentally been about grievance. It's about 'America first' as America being more selfish, that it's smart and tough to be selfish," he says. "It's dumb and naive to try and make America the leader of a rules-based order."

McCain, along with other leaders in the West, Rennie notes, sees alliances as a source of strength for America, as well as a burden. Trump, he says, is only willing to see the burdens and the costs, and not the value, of global partnerships.