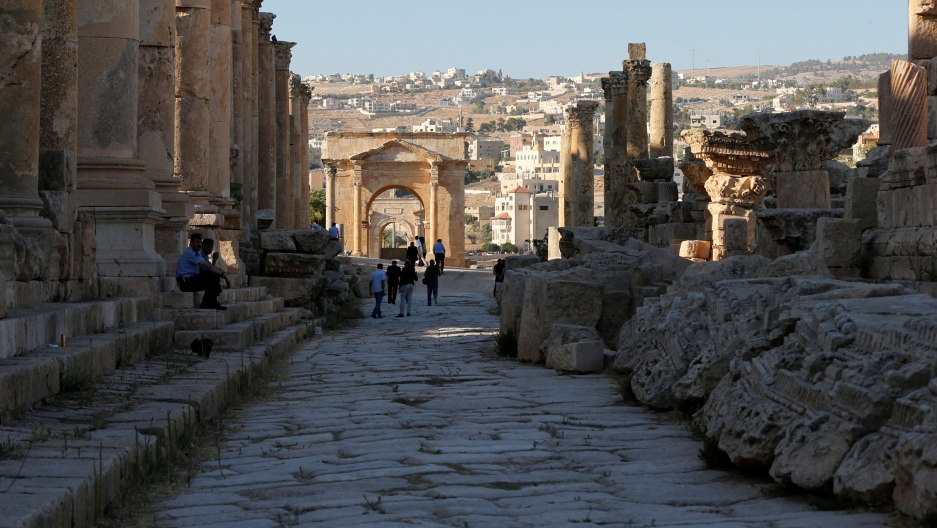 The ancient Romans mastered concrete more than 2,000 years ago and used it to build piers, breakwaters and other structures. Despite the batterings of time and seawater, some of those structures still stand today.

In fact, their concrete has grown stronger over time — the result, scientists now say, of complex interactions between seawater and volcanic ash used in the mortar.

“The Romans had a very different framework for making the cementing fabric of their concrete,” says University of Utah geologist Marie Jackson, lead author of a new report on the concrete published recently in American Mineralogist.

She explains that for ancient concrete makers, the first step was to mix volcanic ash with lime and water — fresh water for architectural monuments, and seawater for marine concrete. (Chunks of volcanic rock were also added to the mortar as aggregate.)

“This produced a very potent reaction, called a pozzolanic reaction, that created a really robust framework of coherence in the concrete,” Jackson says.

But in the new research, Jackson and her colleagues were interested in something that seemingly occurred later, long after the concrete was cured. In samples of Roman harbor concrete, they found the minerals phillipsite and aluminous tobermorite. They were particularly interested in the presence of tobermorite, a rare mineral with interlocking, plate-shaped crystals.

“We found that tobermorite grows through the fabric of the concrete,” Jackson says. “This is a platy mineral that has some very important industrial ... applications, but we have a great deal of difficulty making this mineral.”

As she explains, the team discovered that the mineral cements formed over time, as the volcanic ash remaining in the concrete slowly corroded from exposure to seawater. Rather than the “bad” corrosion we typically expect in interactions between saltwater and infrastructure, this reaction resulted in a stronger structure.

From ancient writings, it seems that Rome’s advanced concrete was no accident — instead, it parallels nature. “Both Pliny the Elder and Seneca write about the volcanic ash deposits of the Gulf of Naples and how these deposits grow mineral cements,” Jackson says. She notes that the same ash was found in harbor concretes across the Mediterranean, indicating the Romans shipped it for use in marine structures.

“They were actually using a geologic framework to develop specific properties in their concretes,” she adds. “And so what we are actually recognizing is a rock-like process that grows these zeolite and tobermorite cements.”

According to the press release, the researchers haven’t yet pinpointed the Romans’ exact recipe for marine mortar. But what they’ve uncovered about the ancient concrete could already have modern applications — especially when it comes to aluminous tobermorite. The researchers think the mineral could improve the materials we use to store nuclear waste.

“It's been considered for cementitious barriers around waste encapsulations, but nobody knows how to make aluminous tobermorite-bearing concretes,” Jackson says. “At least, they haven't until now.”