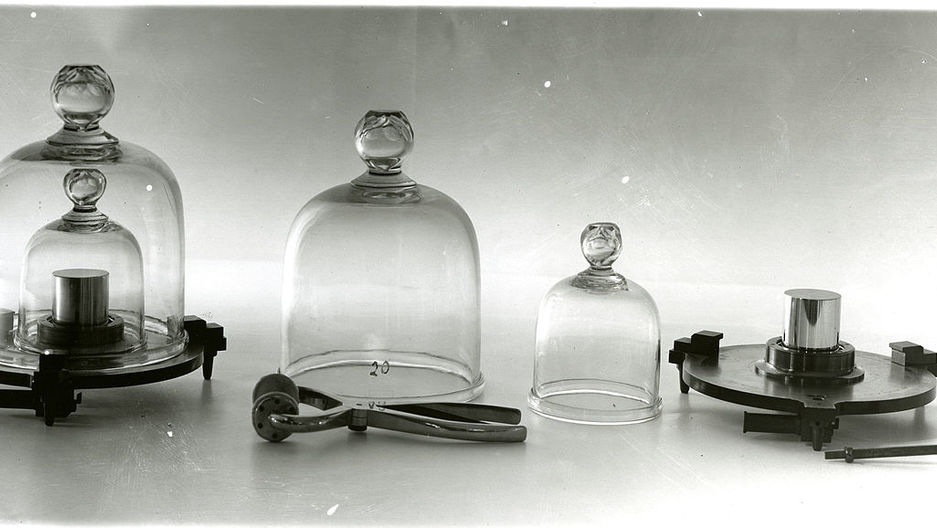 Kilogram No. 20 (right), the United States’ copy of the International Prototype Kilogram, and Kilogram No. 4 (left), a copy of No. 20, used as a secondary standard, are shown here.

National Institute of Standards and Technology

For over a century, we’ve been using the same object to define the kilogram: a pingpong-ball-size chunk of platinum-iridium kept in Paris under lock and key. That will soon change.

The kilogram is the last unit of measure in the international measurement system that’s still defined by a physical artifact, known as the International Prototype Kilogram. An international effort is now underway to replace the IPK with a more mathematical solution — specifically, scientists want to redefine the kilogram using Planck’s Constant, a value from quantum mechanics.

But it’s been tricky to pinpoint the value of Planck’s Constant precisely enough for use in the new standard. In June, a team at the National Institute of Standards and Technology announced their most precise measurement yet for the constant, with an uncertainty of just 13 parts per billion.

Jon Pratt, leader of the Fundamental Electrical Measurements Group at NIST and a co-author of the new study, gives two reasons why scientists are working to ditch the IPK as the kilogram standard: “The idea is that a standard should be universally accessible and that it should be a fixed quantity, it should always be the same,” he says. The IPK, he explains, is neither.

“It's only available in Paris,” he says. “I'd have to get on a plane and take hunks of metal over there to compare to it. So, that's a problem.” The other issue? The IPK now has slightly less mass than its official copies — although scientists aren’t sure whether the IPK is losing mass or the replicas are gaining it.

“We pulled out the IPK as part of this business of trying to measure the Planck Constant, and in the process, we discovered that the existing mass scale, based on the IPK, appears to have shifted by 35 parts per billion,” Pratt says. “That's a problem with these types of artifact systems.”

The new kilogram definition will avoid these problems by drawing on universal constants. “Things like atoms and more specifically, atomic frequencies, the speed of light,” Pratt says, “and where we get the Planck Constant is this issue of the idea that energy is quantized, and so we have a quantum of energy that is scaled by the Planck Constant. So, we have a couple of ways in which we can do experiments that link mass to the Planck Constant.”

According to an NIST press release, several other teams around the world have also come up with new, highly precise values for Planck’s Constant. Next, the release says, an international council will decide what the new Planck Constant value will be. And in 2018, the kilogram will finally be redefined.

But after all this work, the average person won’t notice when a shiny little cylinder in Paris is dethroned as the standard kilogram — and for Pratt, that’s the goal. “One of the games we play in the standards world is to make sure that nobody has to care,” he says.

“So, the care we take in trying to make this transition — from a standard that's based on a hunk of metal to a standard that's based on this sort of abstract idea about the quantization of energy in the universe — is that we want both approaches to agree with each other,” he explains. “And we want to be able to do that at the level of precision that's being done at the moment.”