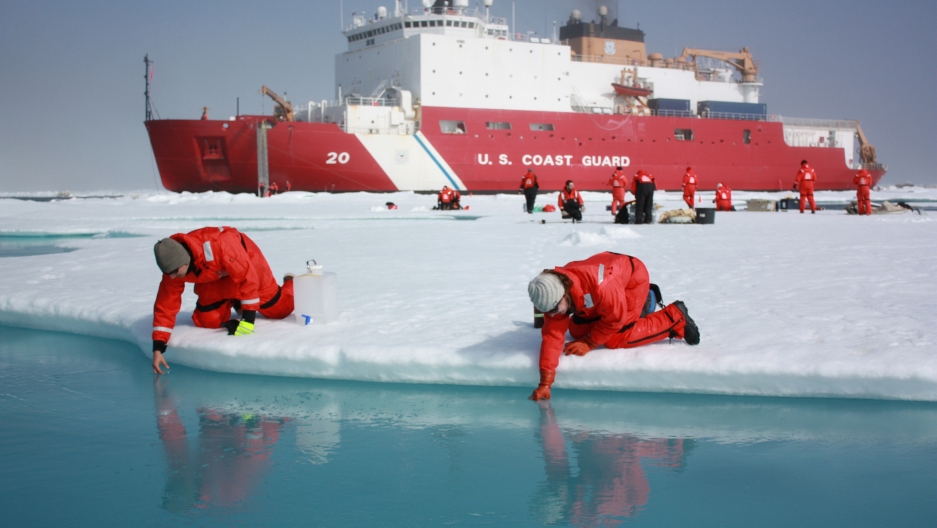 Here, scientists are studying meltwater in the Arctic. A new program aims to help students understand what science looks like outside of Hollywood.

If the first image that popped into your head was an older man with frizzy hair and a white lab coat, surrounded by bubbling test tubes, you’re not wrong — the Einsteinlike “mad scientist” is still a prevailing image in popular culture.

But in the real world, scientists are so much more: Just this summer, Science Friday has featured researchers who are developing a bandagelike flu vaccine; studying polar bears from helicopters; and investigating why living in space gives flatworms an extra head.

Biologist Sarah McAnulty is on a mission to introduce kids to these kinds of actual working scientists. She’s a PhD candidate studying the microbiomes of squid at the University of Connecticut, but she’s also the founder of Skype a Scientist, a program that uses video conferencing to connect volunteer scientists with classrooms around the world.

“So effectively, I match scientists with K-12 classrooms for question-and-answer sessions with the scientist,” she explains. “And these sessions can cover the scientist’s area of study, or it can be a general discussion of what it's like to be a scientist.”

Teachers can choose what kinds of scientists they want to talk to — bringing a chemist into a chemistry class, for example. McAnulty says the program also tries to match classrooms with scientists from underrepresented groups or from the same ethnic or socioeconomic groups “so that the students can interact with a scientist that they can really easily relate to.”

Last semester alone, McAnulty says the program connected scientists to 800 classrooms in 28 countries and nearly every US state. “And we've had 500 [classrooms] sign up so far for the fall,” she says. What’s more, the participating classrooms aren’t just in metropolitan areas. “We've gotten to rural areas, as well, which is pretty exciting.”

Emily Green is also a PhD student at the University of Connecticut, where she works in an ant lab. Last spring, she talked with a middle school science class in rural Vermont as part of the Skype a Scientist program. Over the course of the question-and-answer session, she says, she began to see how much they all had in common.

“I'm from a small town in central Ohio, and so it was neat to be able to connect with these kids and sort of show them my path into a PhD here in Connecticut,” she says, “and show them that even though they're from a small area, that there's so much out there, and even just so much in science that they can start looking at and get interested in.”

The kids were “super into asking questions” about the ants she works with, Green adds. And as they Skyped, she was able to show the students around her lab, pointing out the ant colonies and introducing the kids to other scientists.

But the students’ interest didn’t end there. “I feel like they realized being a scientist wasn't ... something that's in the movies,” Green says, “that we're real people and we can do other things outside of the lab that we're in.”

McAnulty says the program is always looking for more help from scientists and more teachers interested in signing up with their classrooms. “I think it's really important for us to make emotional connections with people,” she says.

“And I think if you have these personal experiences with students or with adults, it really helps them foster trust in you as a person and not just this imaginary science that they have in their head.”

This article is based on an interview that aired on PRI's Science Friday with Ira Flatow. To find out more about the Skype a Scientist program, or to sign up, head to www.skypeascientist.com.