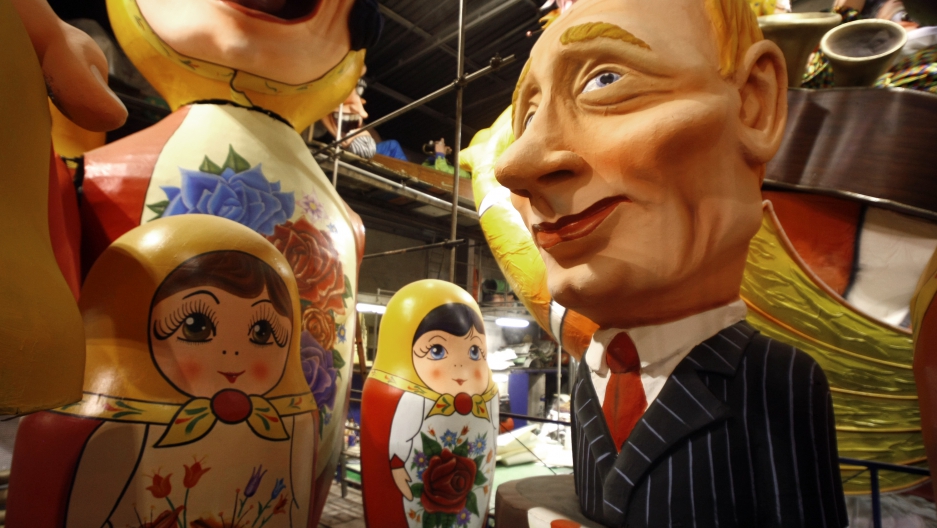 This is a carnival model of Russia's then-Prime Minister Vladimir Putin in 2009.

"When you go on those shows, you're the token Westerner. And everybody who has ever had a gripe about America can sound off on you."

Even if that gripe is completely unrelated to the topic at hand.

Once, Filipov says, he went on a show to discuss politics, and people yelled at him about how Americans are too fat. "And I'm like, 'I'm [5-foot-9] and [weigh] 160, baby! My body fat percentage is less than Pablo Sandoval's!'"

But Filipov says the misconceptions run both ways.

Filipov has been visiting Russia off and on since 1983. He says the current political climate — and the Russia-Trump drama, in particular — shape the way Americans see Russians and vice versa.

For example, Filipov says in 2012, he'd tell people in the US he worked in Russia, and they'd say "cool" and want to talk about Russian vodka. Now, the reaction is quite different. "Either the person will say, 'Oh they have to stop meddling in our elections. It's terrible.' Or they'll say, 'The establishment is making a big deal [about Russia]. Hillary did far worse.' So that word, Russia, will always evoke a reaction about Donald Trump."

In Russia, Filipov says, if you tell people you're American, they'll start talking about how Americans have it out for them. "Whether [Russians] want to be part of the West, whether they don't ... they sense [they're] doing everything [Americans] want, and yet, [we] keep piling on."

Filipov says he often tries to set the record straight but to no avail.