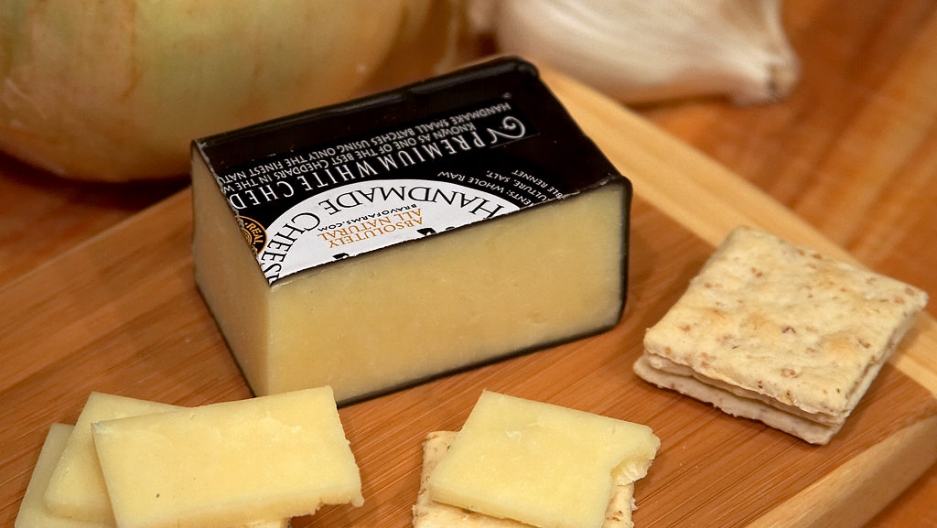 This is a block of cheddar cheese.

It’s a scene worthy of a classic heist movie — an overnight break-in with mysterious criminals. What was their haul?

All the cheddar you can carry. Actual cheddar. Cheese from southern England.

Imagine a sort of Olympics of old-school English country life. As well as best cheddar, there are also awards for best dog, best blacksmith and best vintage tractor. It’s no exaggeration to say that this is probably one of the most important cheddar competitions in the world.

Clothier's family has been making cheddar their own way for a long time, he says. "My grandmother was the first one to write the recipe down. So, she would have been really proud of us winning awards like this. And we still make this vintage cheddar to my family's hundred-year-old recipe."

But shortly after taking home the prize, things started to curdle. Clothier left his prize-winning cheeses at the judging table overnight — ready to display the next day.

But robbers had another idea. They made off with all his cheese — not a trace left. Even the award certificates had been taken.

The question is, how did the thieves make off with their loot? They’re not easy to carry, according to Clothier. “There’s two big blocks, and they're quite heavy. Each one weighs about as much as a bag of cement. So, it’s not the sort of thing you could slip into your handbag or tuck up your jumper.”

Clothier and the team at Wyke Farms are looking far and wide for suspects in the caper. Cheddar’s gone big recently, and Wyke now sells to 162 countries around the world. Could this be an international crime hit? Or possibly, he admits, it was just some locals heading home from the pub who got hungry.

Either way, the missing cheeses now have a reward on their head: £500 (about $650). No questions asked, returned intact. Clothier just wants them home.

“At the end of the day, we just want to see the cheese back. So, that I can share the certificates with the team here. We're incredibly proud of Wyke Farms to have won these fantastic prizes," he says.