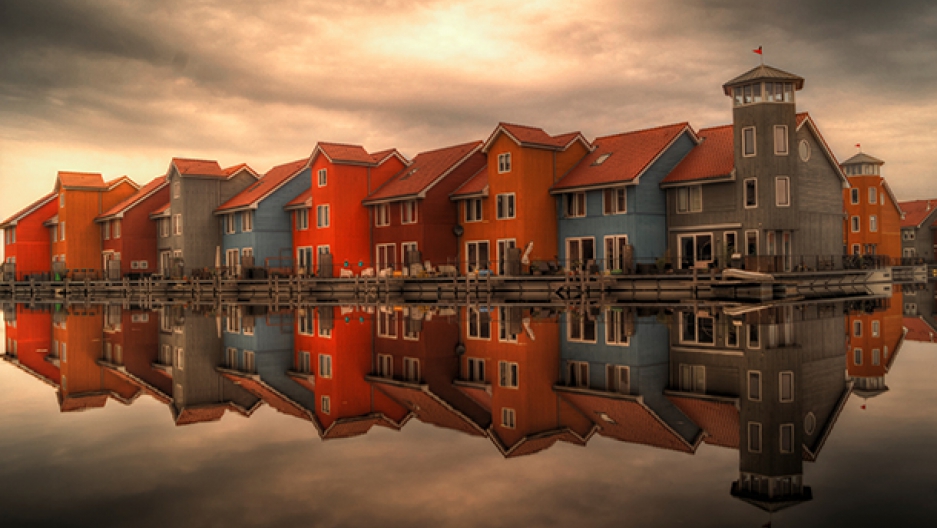 Much of the Netherlands is below sea level, with water always nearby.

Much of the Netherlands is below sea level and major floods have occurred every generation or so for hundreds of years. In a warming world with increased rainfall and sea level rise, the threat from floods is increasing worldwide, and the Dutch are leading the way in water management engineering.

Only 50 percent of the Netherlands is more than a few feet above sea level, so over the centuries the Dutch have become expert at water management. But even they were caught short by crippling floods in the 1990s and they quickly implemented vast flood prevention projects. As the country adapts to the reality of a warming planet, they are passing on their knowledge and expertise to other vulnerable nations.

“At the moment, we are in a transition. We had a strong belief that we could predict and control nature, and we're moving now into a period where we acknowledge that we cannot control nature,” says Chris Zevenbergen, a professor of flood resilience of urban systems at the IHE Delft Institute for Water Education in the Netherlands. “We have to deal with uncertainties in terms of climate change and socioeconomic development.”

Ten years ago, the Netherlands developed the concept of “room for the rivers,” which Zevenbergen calls a “paradigm shift.” “The room for the rivers concept is a turning point in our approach,” he explains. “The old paradigm is confining rivers and building and strengthening the dikes along the rivers, but we decided to explore a new approach, in which we give more space to the water. We allow the river to expand when large volumes of water are entering our country. It's not fighting against water; it is living with water.”

Large parts of the Netherlands consist of what are called polders — low-lying areas of land that have been reclaimed from the sea and are protected by dikes. These polders contain some of the country’s biggest cities. The country is considering ways to dampen the development process in those low-lying areas and develop better early warning systems so the public and local officials are fully prepared in the event of a real flood.

“We call it protection, prevention and preparedness,” Zevenbergen says.

Cities now use parks and public spaces as emergency reservoirs for floodwaters created by severe rainfall. For storm surges from the ocean, they are changing their approach from a purely defensive system to one that prepares for the failure of these systems — what Zevenbergen calls “multilevel protection.”

“The first level is our flood protection systems, the primary dike systems. The second level is, for instance, spatial planning,” he explains.

The Netherlands have built their flood protection systems to the point that the chance of failure in any given year is one in 10,000, which Zevenbergen says is the most stringent system on the planet. Although this probability may sound low, “the consequences are huge,” he points out. “Two-thirds of our economy is in those low-lying areas.”

As always, funding massive projects presents challenges, even when the stakes are so high. Recently, the Organization for Economic Cooperation and Development (OECD) held a conference which directly addressed how to engage the finance sector and the water sector.

As Zevenbergen travels the world, consulting with cities about how to address threats from flooding, he sees two major challenges. First, how to protect existing highly-populated cities. For example, in China, while newly built-up areas all face flooding problems, they can expand in “water-sensitive ways,” whereas transforming flood resilience in established urban areas could take at least a generation.

The second challenge lies in the small and medium-sized cities of Africa and Asia. “Those cities are rapidly growing, but don't have the capacity to [develop] in a sustainable way that takes into account the threats from the rivers, storm surges and rainfall.”

Zevenbergen’s best advice for cities facing the threat of flood from rain or storm surge is this: “Don’t wait until the next flood disaster is coming to have a really serious look at your current situation and protection system.”

“In the Netherlands, we are not responding to flood disaster, we are anticipating a flood disaster,” Zevenbergen says. “That means we have time to see what is the best strategy for our country. That is a process where we are involving all the different stakeholders. It’s a very time-consuming process, but I think we are there now. We are about to implement our new strategy, but it took 10 years to accomplish that.”