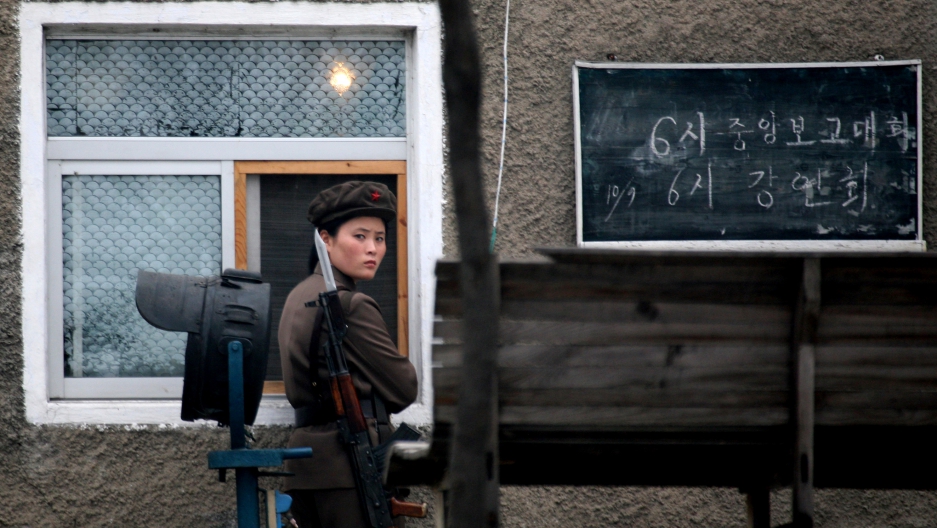 A North Korean soldier guards an army installation on the banks of the Yalu River at the North Korean town of Sinuiju, opposite the Chinese border city of Dandong, Oct. 10, 2006.
Credit: Reinhard Krause/Reuters
Share

A global treaty banning nuclear weapons was adopted at the United Nations on Friday despite opposition from nuclear powers Britain, France and the United States which said it disregards the reality of dealing with international security threats such as North Korea.

The treaty was adopted by a vote of 122 in favor with one country — NATO member the Netherlands — voting against, while Singapore abstained.

None of the nine countries that possess nuclear weapons — the United States, Russia, Britain, China, France, India, Pakistan, North Korea and Israel — took part in the negotiations or the vote.

Even Japan — the only country to have suffered atomic attacks, in 1945 — boycotted the talks as did most NATO countries.

Loud applause and cheers broke out in a UN conference hall following the vote that capped three weeks of negotiations on the text providing for a total ban on developing, stockpiling or threatening to use nuclear weapons.

But activists who worked to negotiate the deal say the fact that nuclear-armed countries have not participated in the process or supported the deal does not render the agreement moot.

“This treaty was really an initiative from states that don't have nuclear weapons, and that have rejected nuclear weapons as a potential source of security, to do something about the situation,” said Ray Acheson of the Women's International League for Peace and Freedom, who was one of the activists who helped negotiate the treaty.

“Developing norms through law has been extremely successful in changing the way that states have thought about and engaged with cluster munitions and land mines, for example ... And so we're hoping that it is sort of this indirect route that we build up a culture against nuclear weapons that we can actually have an impact on them in the future,” Acheson said.

Within hours of its adoption, the United States, Britain and France rejected the treaty and said they have no intention of joining it.

"This initiative clearly disregards the realities of the international security environment," said the UN ambassadors from the three countries. "This treaty offers no solution to the grave threat posed by North Korea's nuclear program, nor does it address other security challenges that make nuclear deterrence necessary," they said in a joint statement.

North Korea marked a worrying milestone in its drive to develop nuclear weapons when it tested its first intercontinental ballistic missile this week.

Nuclear powers argue their arsenals serve as a deterrent against a nuclear attack and say they remain committed to the gradual approach to disarmament outlined in the Nuclear Non-Proliferation Treaty (NPT).

The decades-old NPT seeks to prevent the spread of atomic weapons but also puts the onus on nuclear states to reduce their stockpiles.

Impatience, however, is growing among many non-nuclear states over the slow pace of disarmament as are worries that weapons of mass destruction will fall into the wrong hands.

We’re operating under “the assumption that the sole purpose of these weapons is never to be used. But we know a lot about human error and human misjudgment and mistakes,” Acheson said. “I don't think that we can count on that holding out forever.”

Led by Austria, Brazil, Mexico, South Africa and New Zealand, 141 countries joined in drafting the treaty that they hope will increase pressure on nuclear states to take disarmament more seriously.

Ireland, Sweden and Switzerland voted in favor as did Iran, Iraq, Egypt, Kazakhstan and many African and Latin American countries.

"We have managed to sow the first seeds of a world free of nuclear weapons," said Costa Rica's ambassador, Elayne Whyte Gómez, the president of the UN conference that negotiated the treaty.

The International Committee of the Red Cross hailed it as a "historic step towards delegitimizing" nuclear weapons and declared the adoption "an important victory for our shared humanity."

Disarmament campaigners say the treaty will increase the stigma associated with nuclear weapons and have an impact on public opinion.

"The key thing is that it changes the legal landscape," said Richard Moyes, director of the British-based organization Article 36.

"It stops states with nuclear weapons from being able to hide behind the idea that they are not illegal."

"It is beyond question that nuclear weapons violate the laws of war and pose a clear danger to global security," said Beatrice Fihn, director of the International Campaign to Abolish Nuclear Weapons.

The treaty will be open for signatures as of Sept. 20 and will enter into force when 50 countries have ratified it.