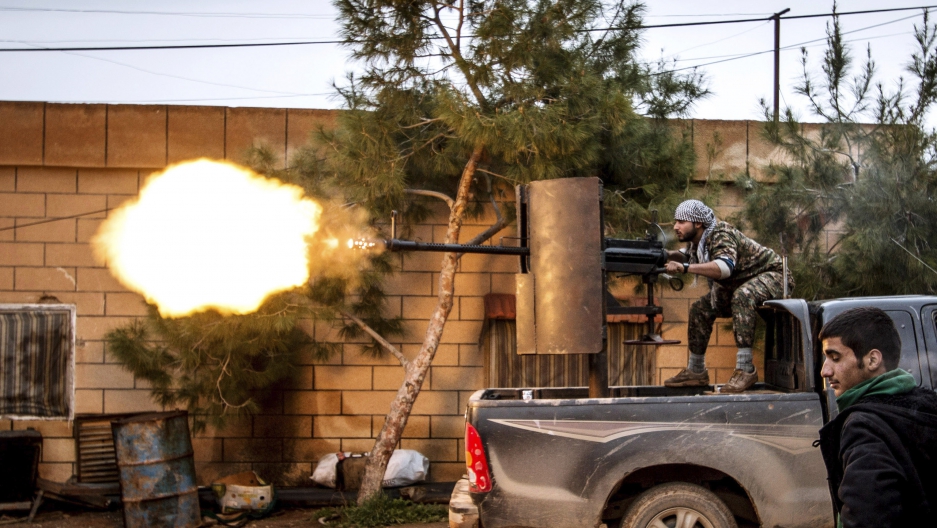 A fighter of the Kurdish People's Protection Units (YPG) fires an anti-aircraft weapon from Tel Tawil village in the direction of Islamic State fighters positioned in the countryside of the town of Tel Tamr in 2015.

Iraq will declare victory over ISIS in Mosul during the "next few days," a senior commander said Friday, as the group's fighters fell back to neighboring Syria.

ISIS, which three years ago declared a cross-border "caliphate" encompassing vast swaths of Iraq and Syria, is now facing twin offensives in Mosul and Raqqa — its two most emblematic strongholds.

The news follows months of steady territorial losses, according to an analysis by Conflict Monitor at IHS Markit.

In June 2017, ISIS territory spanned an an area roughly the size of of Belgium or the state of Maryland. While that's still large, it represents a 60 percent reduction from January 2015, when the militant group controlled more than 90,000 square kilometers in Iraq and Syria, according to IHS estimates.

“Three years after the ‘caliphate’ was declared, it is evident that the group’s governance project has failed,” Columb Strack, a senior Middle East analyst at IHS Markit, said in a press release.

The territorial losses have had a dramatic impact on the militant group's revenue, which fell from $81 million in 2015 to $16 million in 2017.

“Of course [territorial losses are] impacting the Islamic State, especially when you consider that [it’s] running an economy based on taxation and confiscation of properties and assets belonging to the population,” said Ludovico Carlino, a senior Middle East analyst at IHS Markit. “The system that the Islamic State has been developing in the last three years now is gradually collapsing.”

The group is “unlikely to survive its fourth year,” IHS Markit concluded.

“The Islamic State’s remaining 'caliphate' is likely to break up before the end of the year, reducing its governance project to a string of isolated urban areas that will eventually be retaken over the course of 2018,” Strack said.

But while the loss of these territories is a major blow to ISIS, the collapse is unlikely to sway the views of ISIS supporters.

Thus, an ISIS collapse may not lead to peace — at least not initially.

“When you have a major defeat of the Islamic State in big cities like Mosul ... you can expect an increase on external aggressions,” Carlino said. “There is not a strict correlation between declining declining territorial control and increase in external operation but these are two dynamics that go hand by hand.”