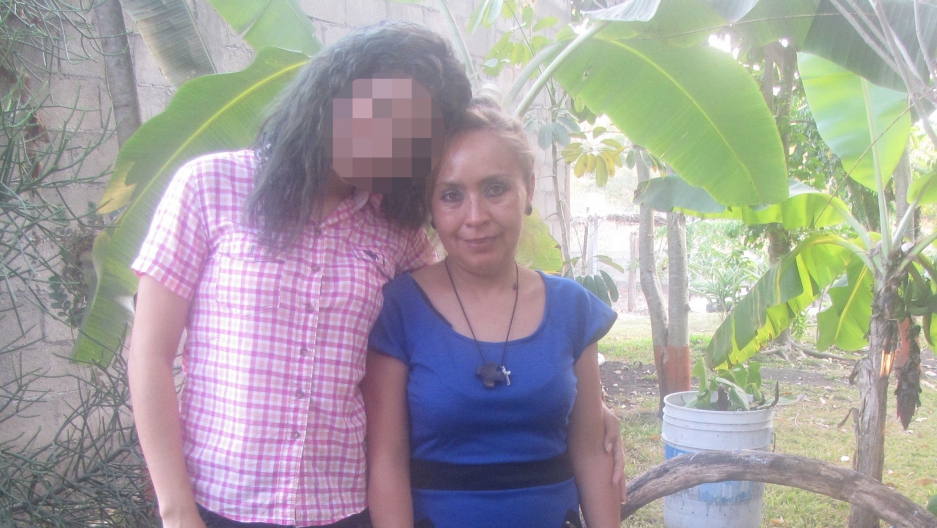 Mona (L) is shown here with Elvira Gordillo Rivera in Rivera's garden in Comalapa, Mexico. Mona says Rivera enabled her to break free from her trafficker and is helping her move on with her life.

You’ve heard about unaccompanied minors from Central America coming to the US. But many more of those youths fleeing violence and poverty stop short of our border, staying in Mexico. There, many lack any support and are vulnerable to exploitation, including sex trafficking.

In the last decade, Mexico has stepped up efforts to address the problem, busting traffickers and providing services for former victims. But post-trafficking, not everyone is able to move on with their lives.

Mona is an exception. She asked that I not use her real name because she's not proud of her story.

If I didn’t know better, I’d think that Mona’s 24 years on Earth had been good to her. When I meet her, she smiles easily and bounces around in bright white tennis shoes with pink laces.

Mona was just 16 when she left her family home in San Pedro Sula, Honduras, out of what she calls youthful foolishness. She made her way through Guatemala to the mountain city of Frontera Comalapa, Mexico, where she quickly found a job waiting tables at a family restaurant — at least, that’s how the gig was pitched to her. In fact, it was a bar, and she was hired to keep male customers company, so they would buy more drinks and pay higher prices. 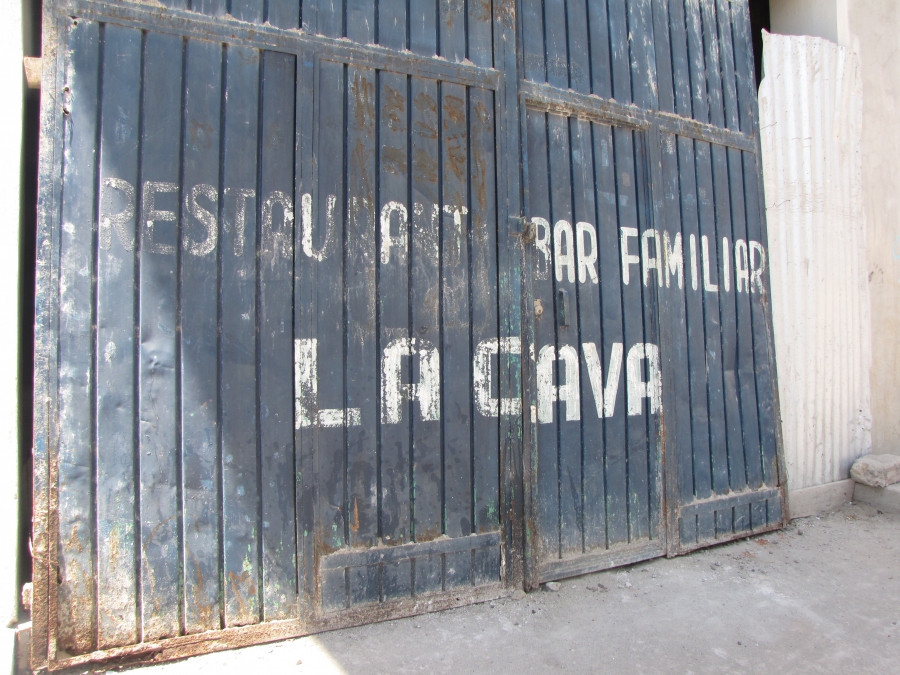 This was the bar Mona worked in after arriving in Frontera Comalapa. It was closed after the owner was arrested for exploiting minors.

“It’s weird. It’s ugly, definitely,” is how Mona describes her experience there. “I can’t imagine someone saying, ‘Oh, I like working in the bar.’”

Customers felt they could touch her as they pleased, she says. But as an undocumented minor, she saw no other options. At least, unlike other employees, she never had sex with the customers. And it seemed she was lucky because after she took up with the boss’s son, she was able to leave the bar and move in with him. He also gave her money.

Soon they had a baby. But there was no domestic bliss. What happened next was a grim, unintended consequence of well-meaning policy.

In 2009, Mexico’s first law criminalizing human trafficking went into effect. So, police raided the bar Mona used to work at and arrested the owner — the mother of Mona’s boyfriend — for exploiting minors.

To get his mom out of jail, Mona's boyfriend needed money, so he pushed Mona into prostitution. At first, she refused, but ultimately she felt she had no choice.

“He was blackmailing me,” she says, “and I was afraid he would take my daughter away.”

He was Mexican, she was undocumented, and only his name was on their daughter's birth certificate. Mona was afraid that if she went to the police, they’d have her deported.

When the ex-boyfriend moved away with their daughter, Mona could only spend time with her by meeting her daughter and her ex in hotels, along with other men — johns.

With the help of her sister, Mona hired a lawyer, but it was fruitless. He drove her back and forth to the courthouse in a city two hours away. Months passed with no progress.

“I told him, ‘I need to resolve this. What are we going to do?’” Mona says. Finally, he referred her to an immigration attorney who would help her for free. 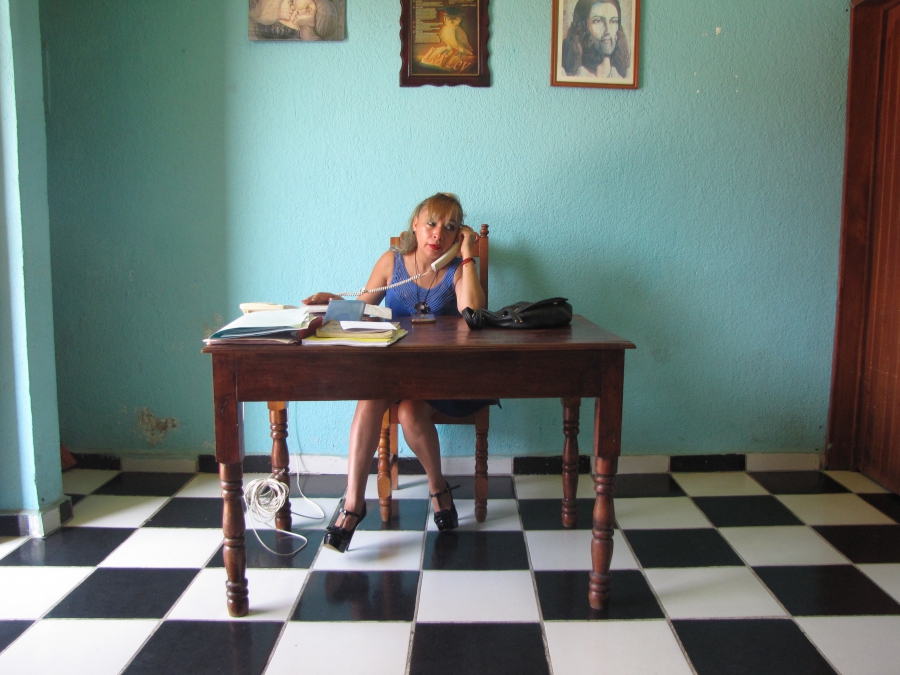 Elvira Gordillo Rivera is a native of Frontera Comalapa. I sit down with her and Mona in Rivera's downtown office. She’s petite, with a short dress, very high heels and a calm focus. Sometimes she wears an army vest with the logo of her employer, SMR, an internationally affiliated Catholic group that helps immigrants and refugees.

When Mona met Elvira, everything changed.

Rivera recalls their first meeting. “I told her, ‘First, you are a woman, and you have dignity,’ and I said, ‘I promise to get your daughter back.’”

Within a month, Mona had her daughter back. The father was jailed for two years for extortion and human trafficking and is now barred from seeing their daughter.

Rivera says her ties to a broad Catholic network helped. She threatened the authorities, saying, “If you deport Mona, this will be an international incident.”

Mona chokes up talking about Rivera. “She’s a very serious person,” she says. "I explained to her my case, and from the first time ... ” Mona pauses and buries her face in her sleeve and cries.

“She gave me a lot of hope. She said, ‘Don’t worry. You’re in the right place.’ She had ways out I had never seen. ... And thanks to God, things went just as she said they would.”

Not everyone is lucky enough to find someone like Rivera, but Rivera says it’s also rare to get a client like Mona. She’s tried to work with several victims of sex trafficking, and many services are now available to help them, but often they decline to press charges, and she says about 1 in 5 returns to sex work to support a drug habit.

She says bar owners give employees cocaine so they can drink a lot with customers, and they get hooked.

I ask Rivera if there’s been a decrease in trafficking since it was criminalized, and raids began.

“No, no, no, no, no, no,” she says. “The trafficking has not decreased because, for men in this society, it is a necessary evil. Also, for organized crime, it is very lucrative.”

Rivera says Frontera Comalapa is still full of bars in which women are trafficked.

Mona also doesn’t see a cure, but she says talking about it helps. She agreed to our interview because she wanted to warn others. So, I ask her what she would say if she could speak to her 16-year-old self.

“There are bad people who want to harm those who come from other countries and not give them opportunities,” she says, "but there are also good people, so look, look for those people.”

Mona says she’s happy now — that being with her daughter is lo maximo, "the greatest." But the journey’s not over. She still needs to get Mexican residency, which will likely take months. And going back to Honduras is not an option given the levels of violence there now — one reason so many young people like her continue to migrate to Mexico and the US.

Once her papers are in order, she wants to go back to school and open a Honduran restaurant. She talks about Elvira Gordillo Rivera with such admiration, I ask if maybe she wants to be a lawyer, too.

“It’s more my daughter who wants to be a lawyer,” she says, “because [Elvira] instilled in her the ethic of helping others, and also because she saw all this idiotic stuff I was doing. That’s why she wants to do something good, help people.”

Mona says she only spends time now with people she knows she can trust — her daughter, her best friend and Rivera. But when her papers are in order, she plans to move to northern Mexico, where there is more opportunity to work and go back to school, and where there’s a woman who will put her up — one of the good people she has found.