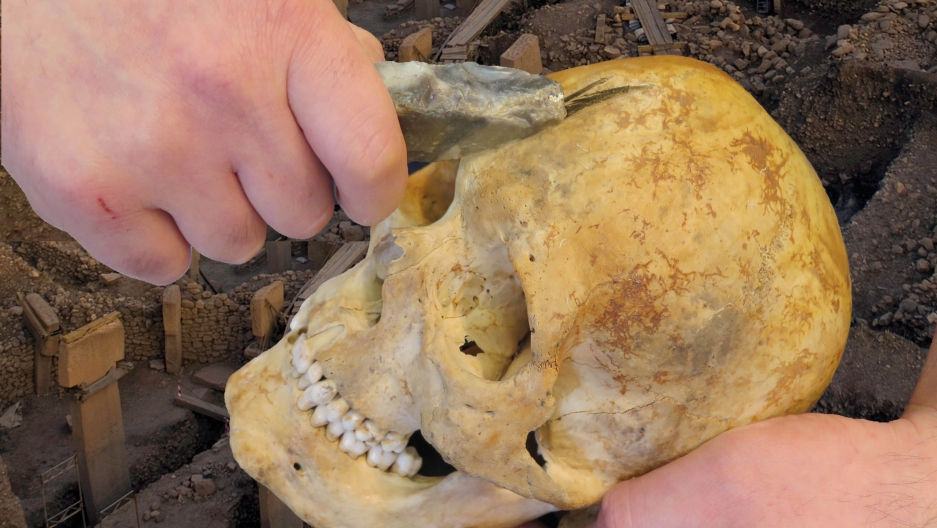 A tentative reconstruction of a skull being modified, in the style found at Gobekli Tepe.

What did our ancestors believe?

We can never know for certain, but scientists have just published evidence from what is possibly the world's oldest temple.

That evidence focuses on what anthropologists are calling a "skull cult." Yes, human skulls. This could be the oldest evidence of ritualized behavior or religious belief system known to man.

The research was carried out by a team from the German Archaeological Institute based in Berlin and published in the journal Science Advances.

The temple complex, now called Gobekli Tepe, is on top of a hill in southeastern Turkey, and was built around 9,000 years ago — that's a good 4,000 years before Stonehenge and the Pyramids.

To make it more impressive, it's from a time known as the pre-pottery Stone Age, when our ancestors were simple hunters and gatherers.

The temple consists of an array of chambers and some 200 standing stones, or megaliths — the first of their kind. Over the next few thousand years megaliths were built across Europe and North Africa as well as southwest Asia.

The megaliths stand in concentric circles, and inside semi-subterranean chambers. Many at Gobekli Tepe have a characteristic shape in the form of a squat letter “T.” Some are 20 feet tall and weigh up to 20 tons. They are planted in holes neatly hewn from solid bedrock. Most are decorated with exquisite carvings of animals like lions, boars, foxes, birds, lizards and insects, and people. Statues abound.

The existence of these structures at Gobekli Tepe is a thing of wonder in itself, and a testament to the resourcefulness, ingenuity and craftsmanship of our ancestors.

Building B at Gobekli Tepe. Note the t-shaped pillars and carvings.

This was the Stone Age, after all. The only tools the builders and artists had were made from stone and wood. They had not even invented the wheel. Imagine trying to carve a block of stone with detailed images of animals and people using just a piece of flint.

Think of the logistics. Anyone who's hosted a cookout knows how much work goes into feeding just a few friends and family for a single afternoon — and that's with all modern conveniences, like supermarkets, refrigeration and cellphones. Imagine trying to find enough food for dozens or hundreds of people, and then storing it and figuring out how to share it, when you haven't even invented pottery yet for storing your food.

Then consider the amount of time needed to do all this. Studies of surviving Stone Age cultures in the 20th century, such as the San people of the Kalahari region in southern Africa, found that typically people spent most of their time finding food and making tools.

So the discovery at Gobekli Tepe is overturning all kinds of assumptions about this phase of early human activity.

That being said, it’s a big claim to say that this is the world's oldest known temple. The evidence is based on the fact that Gobekli Tepe was a large, complex place, but there's no clear sign that people lived there. It does not appear to have been a place of permanent habitation or defense. There are no known burial sites, which you would expect to find in a human settlement. Its sole purpose seems to have been ritualistic. People came and went for whatever purposes they needed. The buildings seem to be ceremonial, not practical. So while nothing is certain, evidence leans strongly to Gobekli Tepe being the oldest temple yet identified.

Then there are the skulls.

Skull fragments make up a hugely disproportionate portion of the bones found at Gobekli Tepe — about two-thirds. So clearly they were being collected .

This is not the first evidence of a skull cult. There is fairly widespread evidence that they were pretty common around the eastern Mediterranean at this time, in different forms, around 9,000 years ago.

View of an area of Gobekli Tepe called the southeast hollow.

The new research for Gobekli Tepe shows something exceptional. Some of the skulls have been modified. Primarily this takes the form of non-decorative carvings. Scientists hypothesize these channels could have held strings to help hold the lower jaw in place. A hole drilled in the top of the head of one also suggests suspension from the ceiling.

The modifications were apparently made shortly after death, while the bone was still elastic.

One of the scientists from the German Archaeological Institute, Lee Clare, told the Los Angeles Times "The buildings were semi-subterranean, and you can imagine the inside lit by a torch causing the T-shapes to flutter in the light. There was likely drumming and singing going on — and skulls, dangling."

This would clearly have been an intimidating sight, but no-one can say for sure what the purpose was. Researchers who know the site and the region have put forward a number of theories. Perhaps it was for venerating ancestors, or simple worship. Or that it was a safe neutral space for conflict mediation, or for rites of passage, like wedding ceremonies, or male initiation rites. Or demeaning of enemies. There are a few clues — alcohol was brewed on the site and the temple thrives with obvious symbols of human fertility.

Researcher Julia Gresky told The World that "sadly we will never know" whether it was for commemoration or humiliation, or whether it was intended to be comforting or frightening.