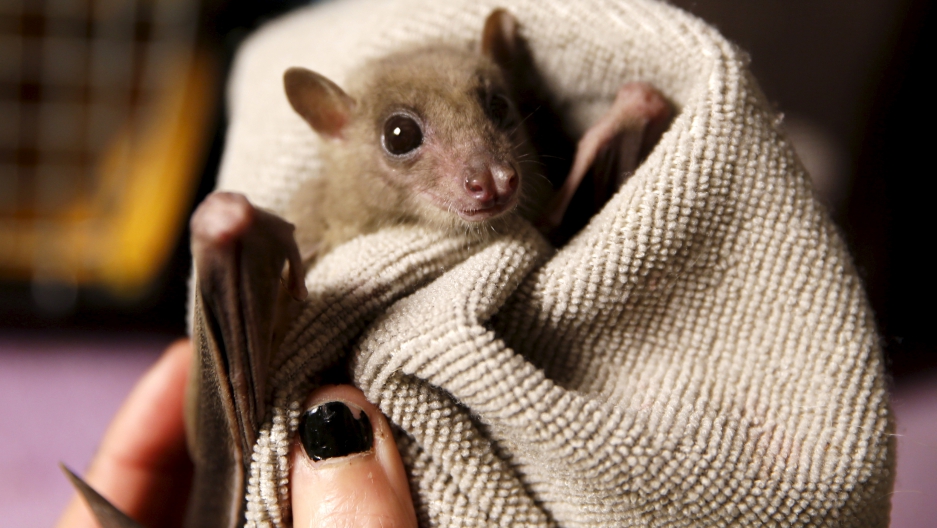 A woman holds an injured Egyptian fruit bat at her home in Tel Aviv February 21, 2016.

For years, scientists have been asking themselves: Are bats special?

The answer may seem obvious. After all, bats are flying mammals that “see” with their ears. Special for sure.

But, for a decade now, researchers have been debating whether bats have another special ability — the ability to carry viruses that infect humans.

Bats have been suspects in the emergence of outbreaks of Ebola, Severe Acute Respiratory Syndrome (SARS), and Middle East respiratory syndrome coronavirus (MERS-Cov).

Now, a new study published in Nature may have settled the question about whether bats are special in this regard once and for all.

“Unfortunately they are special. They do have a higher proportion of viruses that are able to infect people than any other mammal group,” says Peter Daszack, a disease ecologist and a senior author of the new study.

Daszack wasn’t pleased with the findings. For years, he had been a self-described “bat doubter,” pushing back against previous research that suggested that bats have this special ability.

“I was pretty sad, actually. ... I really didn't want bats to be special for viruses, so it was a surprise. And unfortunately I was wrong. They are special [and] they do carry more viruses,” he says.

Related: To prevent the next Ebola, scientists try to catch new viruses before they break out

Coming to the conclusion that bats host a significantly higher proportion of zoonoses — diseases that originate in animals and can be trasmitted to humans — took researchers about six years.

“We brought together every single virus known to us scientifically — every single mammal that those viruses infect — including humans. And then we created a database and started analyzing the data,” Daszack says.

It’s still unclear, though, why bats have this special power.

“There have been a lot of hypotheses put out there,” Daszack says. “When you compare them with other mammals, they live in ... very dense colonies. Some species migrate huge distances. So maybe there are some adaptations to hibernation and migration that mean they have a different physiology.”

Another hypothesis involves the diversity of species — there are more than 1,300 bat species in the world — and the sheer size of the bat population: One in five mammals is a bat.

“Maybe just by having so many different species that, over the millions of years, co-evolved with viruses to produce many more viral types. But ... nobody really knows. It's an intriguing black box,” Daszack says.

But the fact that bats carry these pathogens doesn't necessarily mean humans are bound to contract them.

“Our message is: If we don't go into habitats where bats live and destroy it, if we don't hunt bats, if we don't make contact with bats in a negative way, we won't pick up their viruses,” Dazack says.