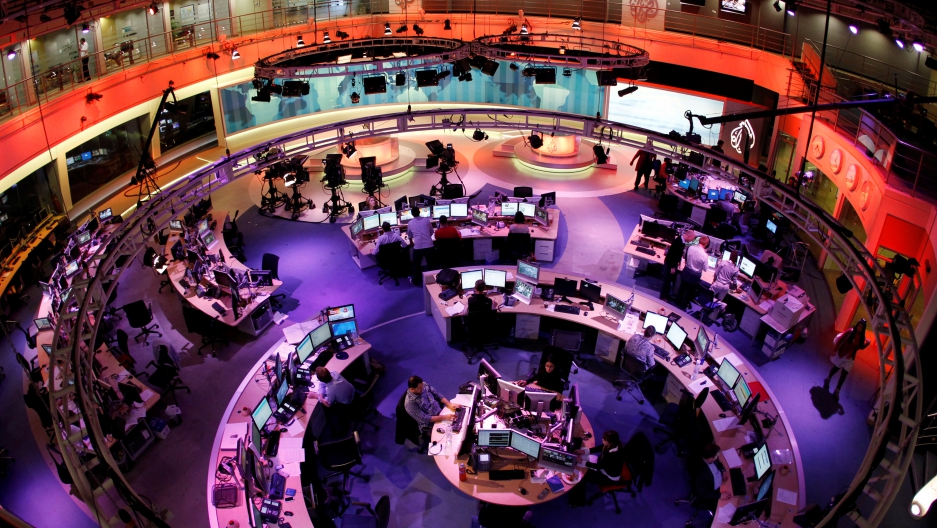 A general view shows the newsroom at the headquarters of Qatar-based Al Jazeera's English-language channel in Doha, February 7, 2011.

Qatar-based broadcaster Al Jazeera says any move to shut it down is an attack on media freedom, following demands by its Gulf neighbors for the network to be taken off air.

The closure of the broadcaster is said to be one of 13 wide-ranging demands placed on Doha by Saudi Arabia and its allies as the price for lifting their almost three-week-long "blockade" of Qatar.

“It’s not about Al Jazeera. ... It’s about Qatar’s foreign policy,” said Noha Mellor, a media professor at the University of Bedfordshire in the UK. “Qatar seems to have used its media outlets, including Al Jazeera, to have a louder voice” in the region, she added.

Since its founding in 1996, Al Jazeera has angered Qatar's neighbors by giving airtime to dissenting or opposing voices, including the Muslim Brotherhood. Shutting down Al Jazeera would silence some of those critics, aligning Qatar's foreign policy with that of its neighbors, Mellor said.

On Friday, the broadcaster blasted those seeking to silence it: "We in the network believe that any call for closing down Al Jazeera is nothing but an attempt to silence the freedom of expression in the region and to suppress people's right to information."

Al Jazeera added that it "deplores" calls for its closure.

Although there has been no official confirmation of Saudi Arabia's demands, the list also apparently calls on Qatar to cut ties to groups including the Muslim Brotherhood, ISIS, al-Qaeda and Lebanon's Hezbollah group. The group also demands that Qatar hand over opposition figures wanted by its three neighbors and Egypt.

The group also reportedly demanded that Qatar shut down other online sites that it supports.

It’s unclear whether Qatar will comply with the demands, but “the real question is what Al Jazeera would look like, even if it survives,” Mellor said. “It will have to tone down its coverage of all neighboring countries. And so it will lose more of its credibility.”

Anwar Gargash, the United Arab Emirates' state minister for foreign affairs, warned Qatar faced a "divorce" if it did not meet the demands.

There has been no official response yet from Qatar, which has denied accusations that it supports extremists.