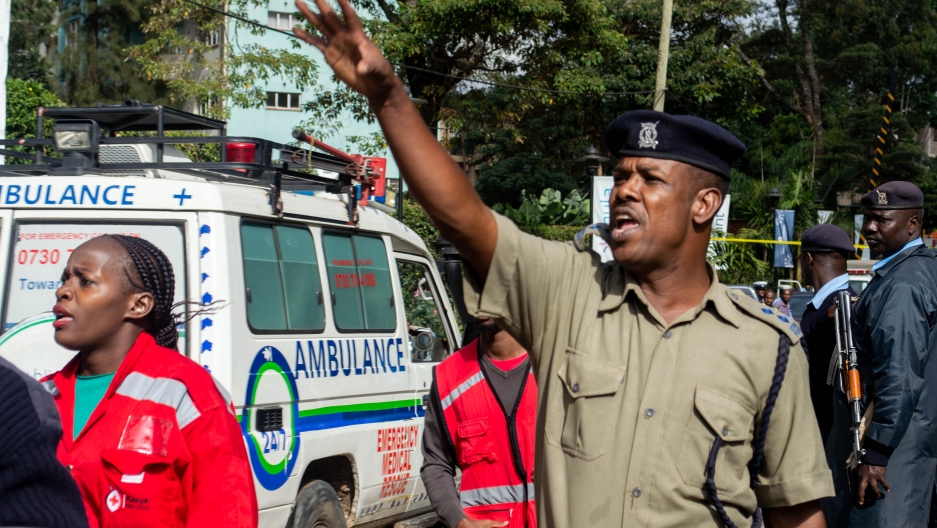 Police clear the area for emergency vehicles on Wednesday, Jan. 16, 2019, a day after a terrorist attack claimed by al-Shabab at the Dusit2D hotel and shopping complex in Nairobi, Kenya. Security operations were still ongoing the morning after the attack as were reports that people were stuck inside buildings.

Iraqi forces launched a house-to-house search operation Monday in parts of west Mosul after a surprise attack by ISIS militants recently expelled from the area.

Members of the group are putting up fierce resistance as an Iraqi offensive for Mosul's Old City, where a few hundred militants are believed to be holed up, entered its second week.

On Sunday the ISIS forces launched a string of counter-attacks on the Tanak and Yarmuk neighbouhoods of west Mosul from which they had been routed, leaving several people dead, officials said.

A top commander in the Counter-Terrorism Service (CTS), which sent forces to fight the ISIS gunmen, says the attackers had infiltrated the area by blending in with returning displaced civilians.

"The group came with the displaced and settled in the Tanak district. They regrouped and launched counter-attacks," Staff Lieutenant General Abdulwahab al-Saadi tells AFP.

"Yarmuk is being searched house to house," he says, adding that two groups of IS attackers were still believed to be in the area, which lies on the western edge of the city.

A CTS medic said the attack had caused deaths but he could not say how many.

"There are martyrs who were killed by Daesh," the medic says, using an Arabic acronym for ISIS.

He says 15 to 20 ISIS fighters were also killed in the battle.

A local official tells AFP the attacks were carried out by "sleeper cells" as a diversionary tactic to ease the siege on the Old City, where commanders say jihadists only control about one square kilometer.

"Operations to flush out pockets controlled by Daesh are ongoing," he says

Iraqi forces, led by the CTS, launched a perilous assault on the Old City in central Mosul on June 18, eight months into an offensive to retake Mosul, the country's biggest military operation in years.

The latest fighting has focused on the neighborhood of Faruq on the northern edges of the Old City and part of the district, known as Faruq al-Ola has been taken by the Iraqi forces.

"The Iraqi flag has been raised over buildings after large losses to the enemy," he added.

AFP reporters who toured the area gave a harrowing account of the devastation in the narrow alleyways of the Old City.

Buildings have been leveled entirely with electrical cables dangling from them and debris from blown up cars found on the upper floors of those still standing.

Carcasses of motorcycles and scooters that had been rigged with explosives and blown up are scattered along the sides of the narrow streets — a legacy of ISIS suicide bombers who used them to slow the advance of the Iraqi forces.

And reporters spoke of the stench of decomposing bodies that permeated, including from the bloated remains of a jihadist half buried under the ruins of a building who died holding his weapon.

Hundreds of IS fighters have been killed since the operation started in October 17, and hundreds of civilians have also died.

More than 800,000 people have had to flee their homes and many are still housed in overcrowded camps.

CTS Lieutenant Colonel Salam al-Obeidi told AFP that 65 to 70 percent of the Old City "has been liberated."

"There is less than a square kilometer left to retake," he said on Sunday, speaking inside the Old City near what is left of the Hadba leaning minaret the jihadists blew up last week.

The Old City resonated with the sound of gunfire from automatic rifles, exploding rockets and the thuds of mortar rounds.

The ornamental brickwork on the base of the 12th century Hadba (Hunchback) minaret, which was Mosul's symbol and one of the most recognizable landmarks in Iraq, was visible in the background.

The cylindrical shaft of the minaret came tumbling down when IS on June 21 detonated explosives the jihadists had rigged to it.

The jihadists simultaneously blew up the nearby Nuri mosque, where Abu Bakr al-Baghdadi gave his first sermon as IS leader in July 2014, his last public appearance to date.

ISIS reached its peak in 2014, when it controlled about 30,000 square miles of territory in Iraq and Syria. But The World’s Richard Hall says it’s suffered major losses since then — about sixty percent of its territory.

It’s had a ripple effect. Losing territory means ISIS has “lost a sense of invincibility that they once had,” Hall said. And that means recruitment is less successful.

Capturing Mosul was a great tool for ISIS propaganda, and simultaneously provided them with a lot of revenue — they broke into banks, exploited the nearby oil fields, and taxed residents of the city. But although losing Mosul would be both a symbolic and strategic loss for the organization, Hall said, ISIS is by no means defeated. It still controls two major cities in southern Iraq and parts of Syria, and it’s likely that ISIS will turn its attention abroad.

“We're already seeing a sharp uptick in attacks by ISIS. We've seen them carry out attacks in the UK and even recently in Iran,” said Hall.

US policy in the region may also have to change. Different forces with competing interests came together to combat the threat of ISIS at its height of power — the US, Iraq, Turkey and Iran, for example.

But countries are starting to look beyond those alliances, Hall said, “and we’re already seeing fissures.” Kurds want a referendum for independence from Iraq, and Turkey’s not happy with US deals to support and supply arms to the Kurds. There have also been rising tensions between US and Iran-backed militias in Syria.

“As all these different forces lose this common enemy,” Hall said, the US needs to do more than order airstrikes. “That's going to require diplomatic muscle.”