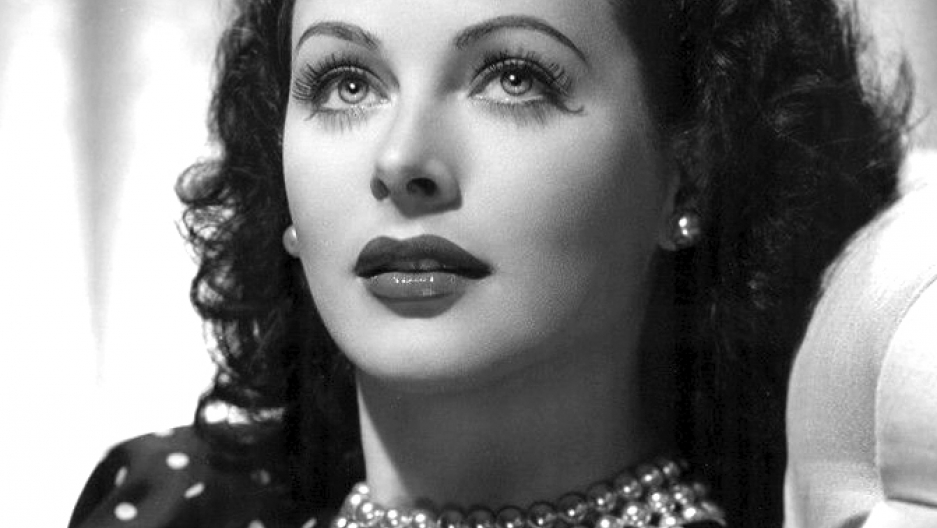 This is Hedy Lamarr, in a publicity photo for “The Heavenly Body,” in 1944.

Known as “the most beautiful woman in the world,” Hollywood actress Hedy Lamarr starred in dozens of films over a career that spanned decades.

But there was more to Lamarr than met the eye. An avid inventor, she worked on everything from a tablet that, when dropped into water, fizzed into instant cola, to frequency hopping — a World War II-era secure communications technology that’s used today in wireless internet, GPS and cellphones.

More and more, Lamarr, who died in Florida in 2000, is posthumously becoming regarded as the "mother of Wi-Fi."

During her years as a film star, little was known of Lamarr’s offscreen career. But in a narrative twist, Hollywood is finally taking notice: A new documentary, “Bombshell: The Hedy Lamarr Story,” premiered at this year’s Tribeca Film Festival, and a TV miniseries is in the works.

“All of a sudden, there’s this appetite in Hollywood [for] making stories that seemed impossible to crack, because clearly there’s a hunger for it there,” says actress Diane Kruger, who narrated “Bombshell” and is working on the new television series. She credits the film industry’s increased enthusiasm in part to the success of “Hidden Figures,” last year’s hit about other brilliant women in science.

“But then for Hedy in particular, what’s been difficult is that her story is so big, and it spans five decades. You want to tell all of it because, yes, she was an inventor, but she was also a brilliant woman and a great actress. And so you need the time to tell her story, and … it’s kind of a hard nut to crack.”

Kruger first heard about Lamarr’s moonlight career from Richard Rhodes, who pieced her story together in his 2011 biography, “Hedy’s Folly: The Life and Breakthrough Inventions of Hedy Lamarr.”

“What attracted me most to her was that she already had this incredible life,” Kruger says, “coming over to the US from Austria, escaping the war, convincing Louis B. Mayer on a boat to the US to hire her as an actress, and then in her spare time — as a nontrained engineer — coming up with frequency hopping. I just found myself completely enthralled by her story.”

According to Rhodes, the Austrian-born Lamarr grew up in Vienna with “a kind of debutante’s education.” But he explains that her father, a bank director, was interested in science and technology, and often walked with her around the city, pointing out what made things work. “So, she had a … background that she associated with a much-beloved father,” he says.

Lamarr’s informal scientific training continued when, as a teenager in 1933, she married a wealthy arms merchant who worked with the German and Italian military. “Once again, as a kind of armpiece at dinner, when all of these generals and admirals were coming around, she listened and absorbed and learned,” Rhodes says.

The marriage didn’t last, and Lamarr set out to kindle her acting career. “When she then got to Hollywood in the 1930s and began inventing on her own, she added to her skills,” Rhodes says. Once there, Lamarr watched World War II unfold with growing concern. “She was Austrian, so technically an enemy alien.”

“Her country was attacking British shipping in particular and torpedoed ships loaded with children who were being moved from England to Canada to escape the German bombing of London and of the country. That horrified her, and it was then that she began thinking how she might be of help.”

In Hollywood, Lamarr fell in with the artistic “it” crowd. “She used to play chess with Man Ray, the American photographer who was part of the whole Surrealist movement in Paris in the '20s,” Rhodes says.

At one dinner party, Lamarr met George Antheil, the avant-garde composer who would become her collaborator on the frequency-hopping technology. Together, they devised a system that used rolls of perforated paper — like the ones in player pianos — to quickly switch between frequencies, making it harder for the enemy to jam signals on radio-guided weapons.

“They needed a way to change the frequencies automatically, and they worked out a way to have a scroll on the plane, like a miniature piano roll, and an equally timed scroll on a torpedo, which would flip the frequency from one point to another with little holes in the scroll just like the ones on a piano roll,” Rhodes says. “It was a very clever use of the existing technology, because digital technologies had not yet, of course, come along.”

Lamarr and Antheil passed their technology on to the United States Navy, which did little with it during the war. It wasn’t until 1997, three years before her death, that Lamarr received professional acknowledgment for her invention.

“As she grew older, I think she was very bitter,” Kruger says. “You know, Hollywood turned [its] back on her because now she wasn’t young and beautiful anymore, and she was trying to keep that facade up but clearly couldn’t. And nobody ever valued her for her mind, so she became a recluse from her own family.

“It’s a sad story, and at the same time, I think it’s a wonderful story that she was alive when she was finally recognized for it,” Kruger says. “But she never, for example, made any money from it.”

Nevertheless, Kruger — who wants to begin her miniseries by depicting Lamarr as a teenager — thinks the actress’s story can inspire others.

“For me, it is really about encouraging young people, and especially young women, to go into fields that are traditionally male-oriented, and to not judge a book by its covers,” she says. “I also think that the father-daughter relationship is something that I find myself, as a girl, really interested in.

“And, you know, anything is possible if you have a curious mind, and you think outside the box.”