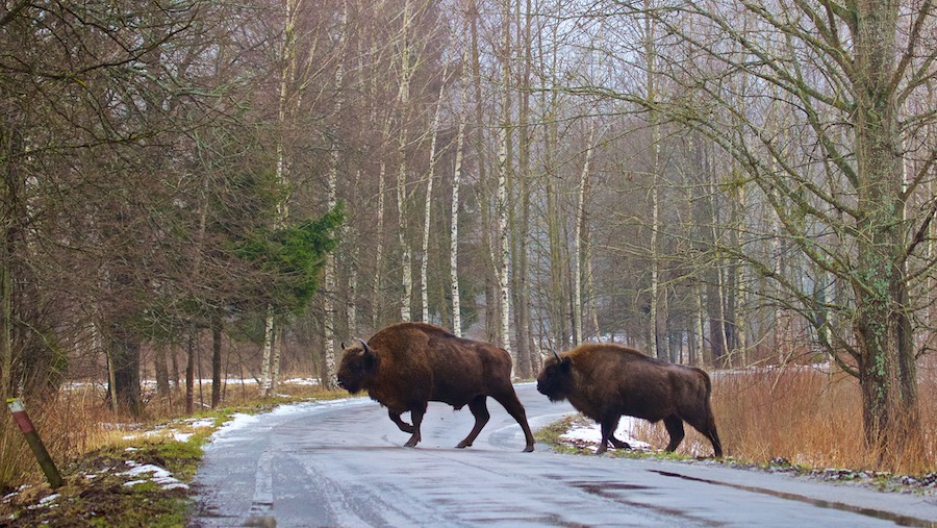 European bison cross a road in Poland's Białowieża Forest, one of the last remaining sanctuaries for these animals on the continent.

In an ancient forest in Poland, environmental activists are chaining themselves to logging machines to protect the trees from being cut down.

The Białowieża Forest is a UNESCO World Heritage site that straddles the border of Poland and Belarus. It is perhaps the largest remaining primeval forest in Europe.

Most of the forest is in Belarus, where it is fully protected, but in Poland, about two-thirds are managed as commercial forest, and the government has recently tripled the amount of logging allowed there. The government claims increased logging will combat an attack of the spruce bark beetle.

Bogdan Jaroszewicz, a biology professor at the University of Warsaw and the director of the Geobotanical Station in Białowieża Forest, says the beetle is part of a natural cycle, and the government is trying to “justify economic aims by ecological reasoning.”

“They are cutting spruces to sell the wood,” says Jaroszewicz. “From an ecological point of view, it just brings damage. Our experience here in the Białowieża Forest shows that it doesn't matter if infested spruces are logged or not. The outbreak stops after some years.”

The Białowieża Forest ecosystem developed over the last 10,000 years, as the last glaciation withdrew from the area. It is home to some unique creatures, including its most iconic, the European bison. This species of bison was extinct in the wild by the beginning of the 20th century and was reintroduced to the Białowieża Forest in 1952.

The forest is also home to several woodpecker species — the white-backed woodpecker and three-toed woodpecker, for example — that long ago went extinct in other European countries. “Those two woodpeckers are associated with dead wood and dying trees, and that's why they are extinct in the other countries. In Białowieża Forest, they are in very good shape,” Jaroszewicz says.

“Last year, the European Commission sent a special mission to Białowieża Forest to check, on the ground, the effect of logging on habitats and species that are protected by the Natura 2000 network of protected areas,” Jaroszewicz. “They asked Poland’s Minister of the Environment for justification and an explanation of the increased logging rate. As far as I know, our ministry answered this letter, but logging was not stopped or limited. The European Commission may accept the situation or it may send the case to the European Court of Justice.”