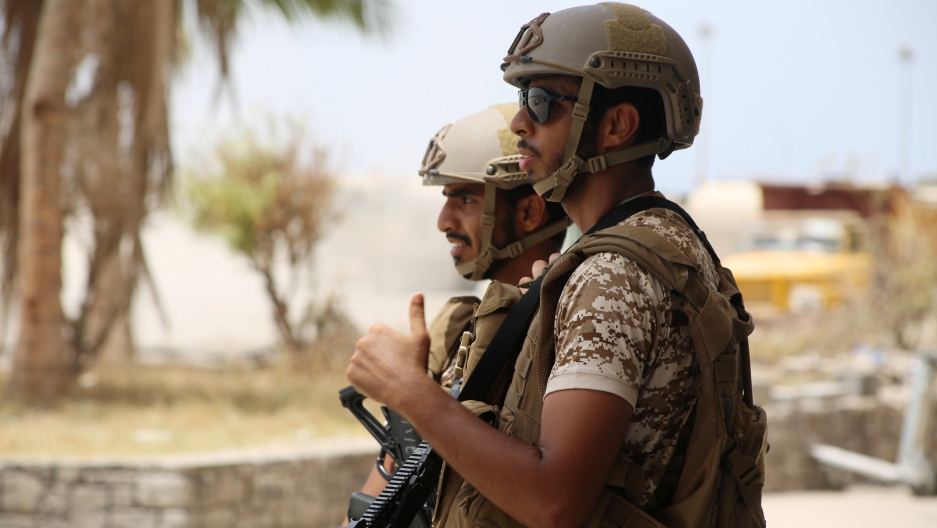 UAE soldiers stand guard at the international airport of the southern port city of Aden.

"We at Human Rights Watch have documented a variety of different forms of what appear to be abuse and torture," says Kristine Beckerle, who led an investigative team on the ground this year in Yemen. "And this is coming from not from one person or two people, but from a variety of different people who are saying that the treatment in these detention facilities is horrible, to put it bluntly."

Human Rights Watch and the Associated Press on Thursday released independent reports about a network of secret Yemeni prisons operated by, or in cooperation with, the United Arab Emirates. The UAE is a member of the Saudi-led and US-backed coalition fighting to restore the Yemeni president, Abdrabbuh Mansur Hadi, who was forced to flee fighting in his country more than two years ago.

Today the UAE is the main occupying force in southern and eastern Yemen. 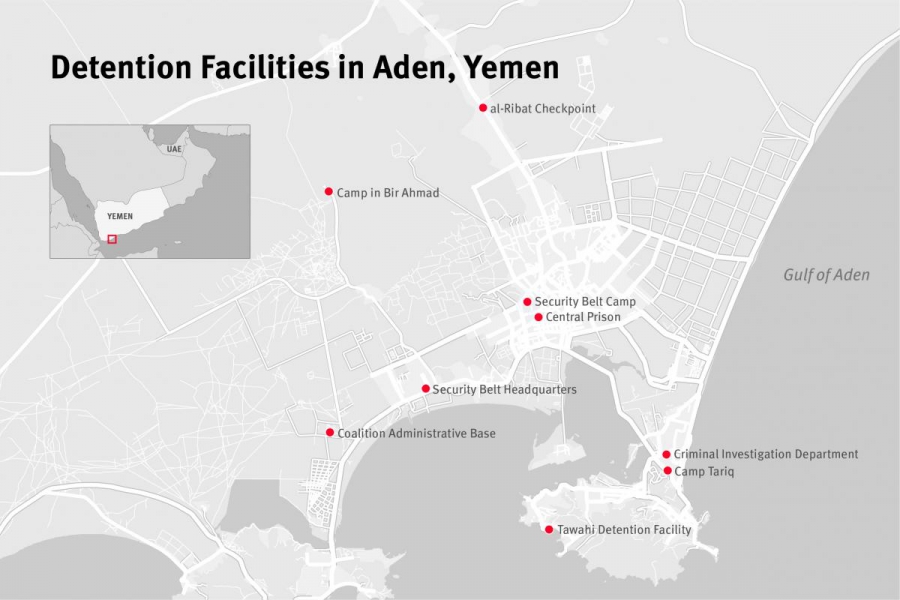 The southern Yemeni port city of Aden is held by the UAE, and it is the symbolic headquarters of President Hadi, who lives in exile in Saudi Arabia. Aden has a number of detention centers, in prisons, jails, military and government buildings, according to the reports.

In its press release, Human Rights Watch says "multiple sources, including Yemeni government officials, have reported the existence of numerous informal detention facilities and secret prisons in Aden and Hadramawt (in eastern Yemen), including at least two run by the UAE and others run by UAE-backed Yemeni security forces. Human Rights Watch documented people held at 11 such sites in the two governorates.

But the UAE denies involvement in the detainee scandal. "The Emirati state, a member of the Arab coalition, does not administer or supervise any prison in Yemen," the UAE foreign ministry said in a statement Friday.

"That claim beggars belief," says Beckerle, "because you've got two separate investigations [and] tons of Yemenis documenting and reporting on these issues."

Beckerle, who led the investigating team for Human Rights Watch, recalls one interview, in particular, with a former detainee. "I remember sort of sitting there and just looking at him, because you have this person telling you about horrible conditions, horrible treatment," she says, "and yet his focus is on all the other people that were detained with him who he felt had it worse, and for his friends and family who were still disappeared. He had no idea what happened to them."

The Associated Press report detailed US cooperation with the UAE and its detention program.

"Several US defense officials, speaking on condition of anonymity to discuss the topic, told AP that American forces do participate in interrogations of detainees at locations in Yemen, provide questions for others to ask, and receive transcripts of interrogations from Emirati allies," the AP reported. "They said US senior military leaders were aware of allegations of torture at the prisons in Yemen, looked into them, but were satisfied that there had not been any abuse when U.S. forces were present."

"They denied taking part in any of the abuse that we documented," says Beckerle, "but the problem is that it's very hard to claim 'clean hands' when you've now got two separate investigations, multiple reports by Yemeni actors of abuse [and] torture in the same facilities and by the same forces that the US is cooperating closely with."

The American influence in Yemen is hard to overestimate. Between its support for the Saudi-led coalition that control Yemen's coastline and airspace, and its drone program that continually attacks al-Qaeda suspects from the sky, the US is both feared and reviled in parts of Yemen.

"And I think that's very scary for a Yemeni person whose family member has been missing for months to hear that, not only are they not going to get answers to how their family member is doing, if they're still alive, where they are, but that it's now 'with the Americans.'"

We asked for comment from the US State Department for this article. A spokesperson replied via email, "We have seen this report. I would refer you to DoD for further comment." A Department of Defense spokesman replied, "As a matter of policy we do not discuss the details of bilateral intelligence arrangements with partner nations. This is no exception."