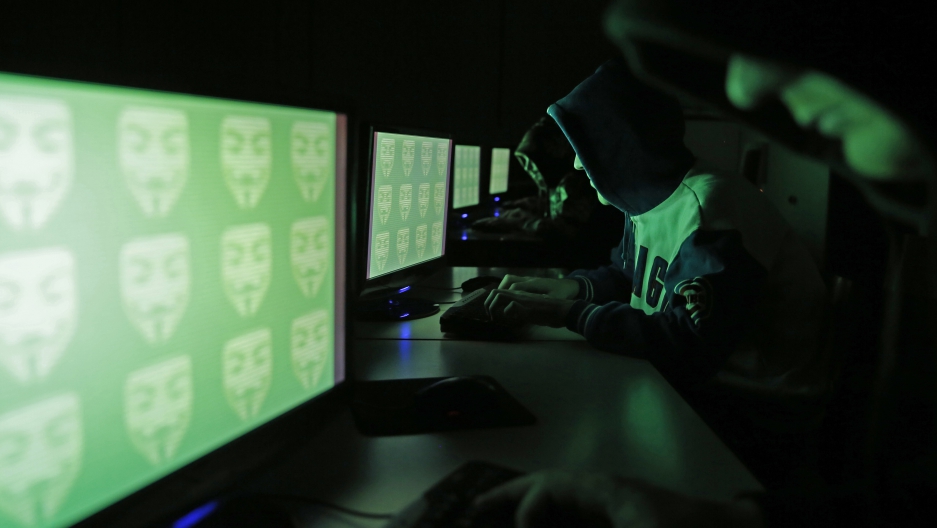 People pose in front of a display showing the word "cyber" in binary code, in this picture illustration taken in December 2014.

There’s a running joke in the cybersecurity industry that squirrels pose a greater threat to the power grid than hackers.

Russia has been able to shut off parts of the power grid to cause massive blackouts in Ukraine on two separate occasions.

And the technology they’ve developed is highly sophisticated and adaptable, which means that any country could be the next target of Russian hackers.

The World spoke with Wired reporter Andy Greenberg, who found that Russia has been using Ukraine as a testing ground for its cyberwarfare techniques since 2014.

Here’s an excerpt from his article, “Lights Out: How An Entire Nation Became Russia's Test Lab for Cyberwar,” Wired magazine’s cover story this month.

The clocks read zero when the lights went out.

It was a Saturday night last December, and Oleksii Yasinsky was sitting on the couch with his wife and teenage son in the living room of their Kiev apartment. The 40-year-old Ukrainian cybersecurity researcher and his family were an hour into Oliver Stone’s film Snowden when their building abruptly lost power.

“The hackers don’t want us to finish the movie,” Yasinsky’s wife joked. She was referring to an event that had occurred a year earlier, a cyberattack that had cut electricity to nearly a quarter-million Ukrainians two days before Christmas in 2015. Yasinsky, a chief forensic analyst at a Kiev digital security firm, didn’t laugh. He looked over at a portable clock on his desk: The time was 00:00. Precisely midnight.

Yasinsky’s television was plugged into a surge protector with a battery backup, so only the flicker of images onscreen lit the room now. The power strip started beeping plaintively. Yasinsky got up and switched it off to save its charge, leaving the room suddenly silent.

He went to the kitchen, pulled out a handful of candles and lit them. Then he stepped to the kitchen window. The thin, sandy-blond engineer looked out on a view of the city as he’d never seen it before: The entire skyline around his apartment building was dark. Only the gray glow of distant lights reflected off the clouded sky, outlining blackened hulks of modern condos and Soviet high-rises.

Noting the precise time and the date, almost exactly a year since the December 2015 grid attack, Yasinsky felt sure that this was no normal blackout. He thought of the cold outside — close to zero degrees Fahrenheit — the slowly sinking temperatures in thousands of homes, and the countdown until dead water pumps led to frozen pipes.

That’s when another paranoid thought began to work its way through his mind: For the past 14 months, Yasinsky had found himself at the center of an enveloping crisis. A growing roster of Ukrainian companies and government agencies had come to him to analyze a plague of cyberattacks that were hitting them in rapid, remorseless succession. A single group of hackers seemed to be behind all of it. Now he couldn’t suppress the sense that those same phantoms, whose fingerprints he had traced for more than a year, had reached back, out through the internet’s ether, into his home.

The Cyber-Cassandras said this would happen. For decades they warned that hackers would soon make the leap beyond purely digital mayhem and start to cause real, physical damage to the world. In 2009, when the NSA’s Stuxnet malware silently accelerated a few hundred Iranian nuclear centrifuges until they destroyed themselves, it seemed to offer a preview of this new era. “This has a whiff of August 1945,” Michael Hayden, former director of the NSA and the CIA, said in a speech. “Somebody just used a new weapon, and this weapon will not be put back in the box.”

Now, in Ukraine, the quintessential cyberwar scenario has come to life. Twice. On separate occasions, invisible saboteurs have turned off the electricity to hundreds of thousands of people. Each blackout lasted a matter of hours, only as long as it took for scrambling engineers to manually switch the power on again. But as proofs of concept, the attacks set a new precedent: In Russia’s shadow, the decades-old nightmare of hackers stopping the gears of modern society has become a reality.

(Excerpted with permission from WIRED. Read the full story here.)