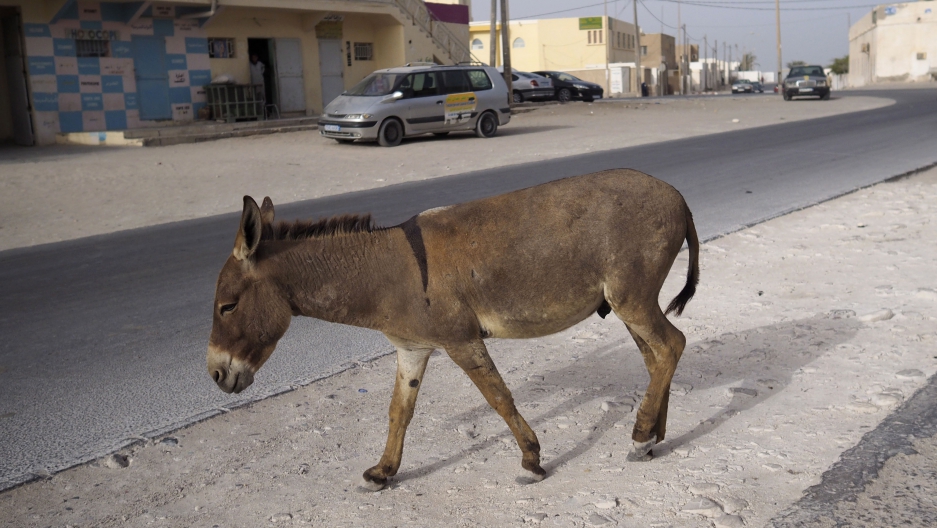 A donkey walks on a street in downtown Nouadhibou, Mauritania.

Ashley Ness was tracking down smugglers in the South African countryside earlier this year when she came upon an unexpected sight — hundreds of donkey hides hanging on tree branches.

The hides were on a homestead rented out to Chinese immigrants, said Ness, an inspector with Highveld Horse Care, a nonprofit animal rights group. Tractors, shipping containers and other detritus littered the property. Inside one of the containers, Ness and police officers found at least 3,000 donkey skins stacked.

Meanwhile, the street value of the hides in China was an estimated $1.58 million. 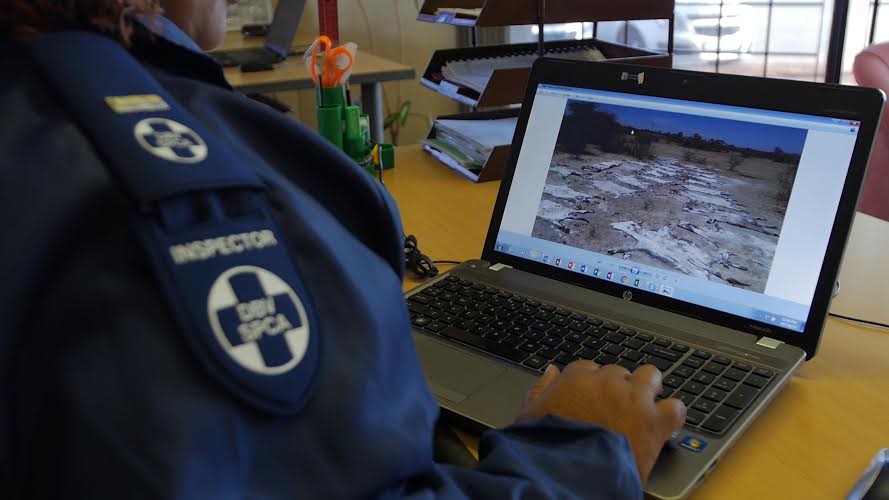 A NSPCA officer reviews a video of multiple donkey hides found at an illegal abattoir.

Chinese demand has fueled a thriving underground market for African donkey hides in recent years, according to a report by the British nonprofit, the Donkey Sanctuary. A donkey hide that two years ago sold for $40 in South Africa now fetches around $140, said the group. And once it gets to China, it can sell for hundreds more.

“Within the last two years has been the emergence of large-scale global trading in donkey skins,” the group’s report said, estimating that the total worldwide trade was around 1.8 million hides a year.

The hides are a key ingredient in creating a traditional Chinese medicine called ejiao — a gelatinous substance sometimes called ass-hide glue — that is used to treat anemia, sleeplessness and excessive menstrual bleeding. The growing demand for the drug among China’s middle class has stoked demand for the hides along the underground trade routes that animal traffickers use throughout Asia and Africa. 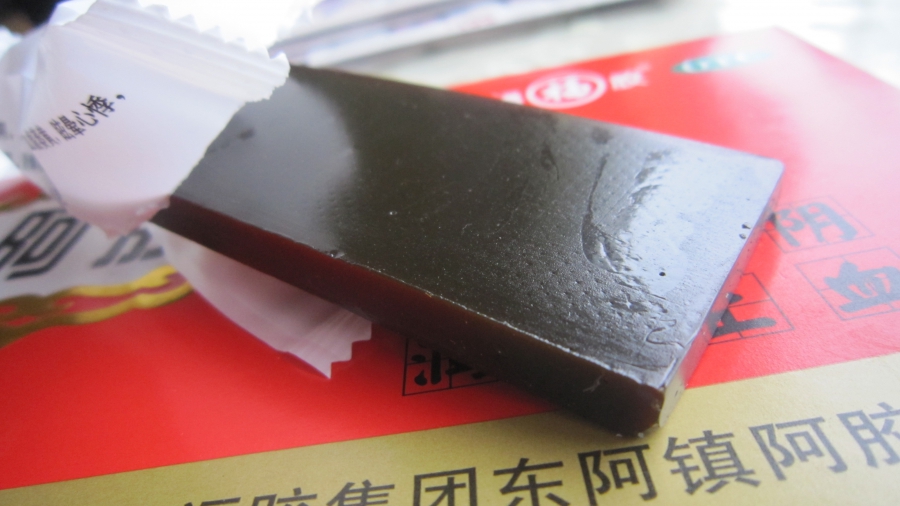 “These are the same syndicates involved in abalone, rhino horn, and lion bone,” said Ness.

Earlier this year, the National Society for the Prevention of Cruelty to Animals in South Africa released a report highlighting the brutality in the illegal hide trade.

“Donkeys are being rounded up or stolen, then transported and inhumanely slaughtered for their skins,” the society said. “Evidence indicates that the method of slaughter is horrendous — indications on carcasses have shown a hole behind the head. That is, the donkeys appear to have been immobilized with an instrument, then skinned, probably whilst still conscious. Death would have been slow and excruciatingly painful for these animals.”

According to Under the Skin, a British donkey sanctuary, the current demand for ejiao requires as many as 10 million donkeys hides annually. An estimated 44 million donkeys currently live on the planet, suggesting the species could go extinct in five years if traders were able to satisfy demand. 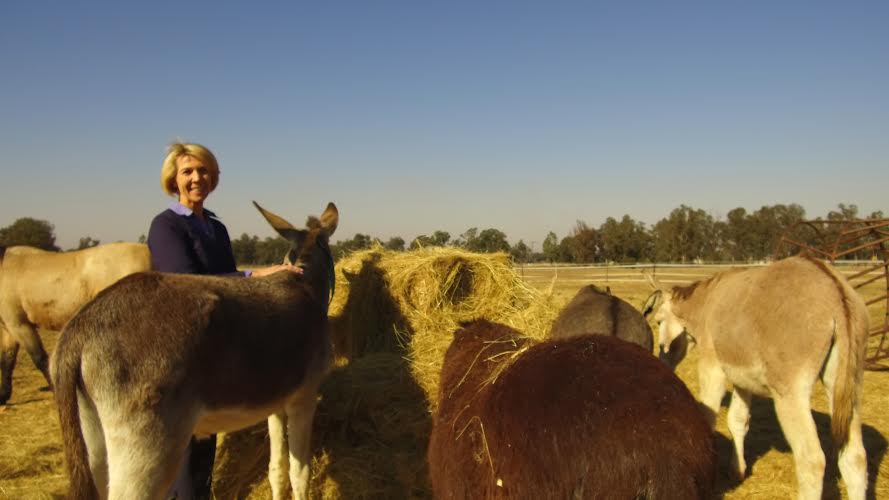 Chinese agricultural authorities have reported that the number of donkeys in China have fallen from an estimated 11 million in 1990 to an estimated 6 million in 2014, even though Chinese farmers have tried to cater to local demand.

“Basically, there is a such a big demand from the Chinese companies that are making this gelatin product that we are seeing our donkey populations globally being decimated,” said Jesse Christelis, owner of Donkeys and Dwarf Goats SA, a breeder of dwarf donkeys that are sold as pets in Johannesburg.

Christelis is promoting donkey milk products, such as soap and makeup, so that people might see value in the animals other than their hides.

“I think we have taken donkeys for granted,” he says. “A world without donkeys would mean many households in rural areas would not have water. They would not have an animal to carry their kids to school. A lot of these guys are renting their donkeys out as working donkeys in their area, which is also creating income. The skin trade in crippling these families and taking away their livelihood.”

Burkina Faso, Mali, Niger, Senegal and Pakistan have banned the trade of donkeys.

South Africa officials have expressed their interest in the donkey market, however. Currently, three slaughterhouses in the country process donkey meat and hides. But they cater to local demand. The country doesn’t have a trade agreement with China for the export of hides.

“There have been a lot of atrocities with regards to donkeys,” says Langa Madyidi, an official studying the donkey trade in South Africa’s department of agriculture. “Our approach is to counteract this. There is very little knowledge on donkeys as well as the regulatory aspect of exporting donkeys.”

Madyidi was sensitive to those who said the trade was decimating donkey populations around the world. In solving the problem, she saw an opportunity to create jobs. “If someone were to start an abattoir [for exporting hides], they would first need to focus on the production of animals,” he says.

Ness, who closely monitors the lawful slaughtering of donkeys, is skeptical that South Africa has the capacity to cater to Chinese demand legally. But if that happens, she would want to make sure the process was humane.

“If you legalize it, welfare has to be key,” she says. “There have to be permanently employed people who will monitor that things are done aboveboard.”