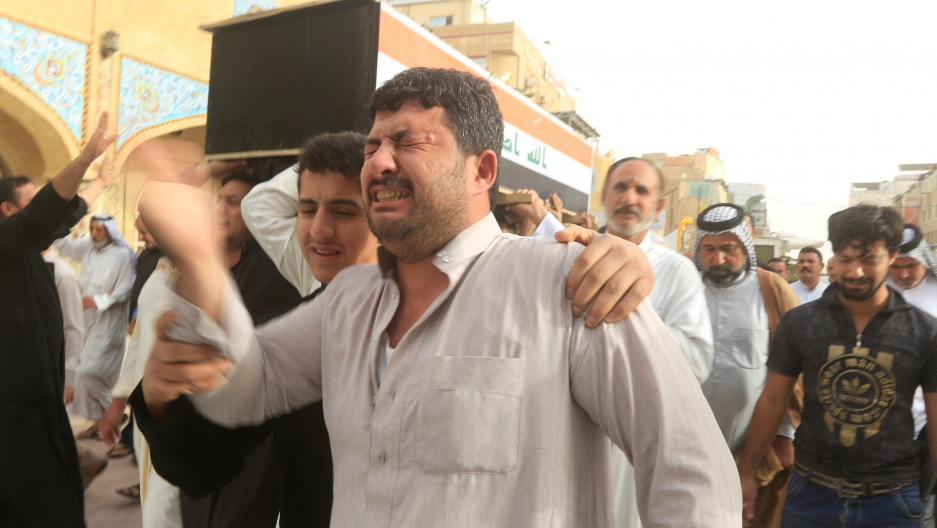 Mourners carry the coffin of a member of Iraqi security forces, killed during clashes in Mosul, June 22, 2017.

The battle is still raging in the northern Iraqi city of Mosul.

ISIS militants are cornered in the Old City. Iraqi and coalition forces are advancing slowly, capturing as little as one city block per day — if that. And ISIS fighters continue to strike back. On Wednesday, they seemed to detonate explosives at Mosul's 12th-century mosque. That iconic structure — with its famous leaning minaret — is now in ruins.

Nabih Bulos, a special correspondent for the Los Angeles Times, left Mosul on Tuesday. He says ISIS is using everything it has to hold on.

"They're using everything they have," Bulos says."We're talking about the use of 23mm guns, so the stuff that's used for anti-aircraft. We're talking about swarms of suicide bombers, and they're not using car bombs now because there's just no space, but they're using snipers by the ton. It's been really very hard going."

He spoke to The World's Carol Hills on Thursday. Here are the highlights of their conversation.

Carol Hills: You were with the Iraqi army as they're trying to move in, inch by inch, to the Old City. Visualize that for us: How is that taking place?

Nabih Bulos: Essentially it's Stalingrad-esque. Almost no building is left unharmed. So the place is a morass of masonry, and twisted metal. The soldiers are creeping along but they're also dealing with snipers and suicide bombers. So they're moving very carefully. But the problem is compounded by the fact that you have civilians, lots and lots of civilians. And the moment they see an opening many of them run toward security forces, which means that they have to struggle to actually decide who is friend or foe among the swarms who are coming to them. And that's why it's very difficult.

We're also talking about a situation where they have to call in airstrikes very often just to be able to advance. And we're talking about different groups here of the Iraqi army, but then you have the special forces groups who are doing a better job of advancing, but they have to wait for the others to secure their flanks, so really it's been very, very hard going.

I know you left just before the destruction of the city's iconic al-Nuri mosque. Tell us the sort of symbolic importance the mosque held for residents of Mosul, and for all Iraqis.

The mosque and the minaret that's attached to it is called the al-Hadba, or "The Hunchback." These have been the icons of Mosul. Mosul was in fact often called al-Hadba instead of its name, because the monument was basically synonymous with the city. The Islamic State had supposedly placed mines around it back in the day. It's actually kind of a surprise that it lasted so long. Yes, it's where the group's leader Abu Bakr al-Baghdadi had given his first speech as a "caliph," but at the same time if it's a function of denying Iraqi troops their symbolic victory, then they'll do it without hesitation. But it should also be said that the Islamic State has blamed the coalition for it.

How was the mosque actually toppled?

So the footage that we've seen — this is second hand so I can't confirm it myself — you see the mosque still standing, and you suddenly see this series of explosions along the mosque's minaret, and then ripping through the rest of the structure. And then it collapses to dust. Based on that footage it was a controlled explosion by Islamic State. But they say it was an airstrike that did it.

What's your sense of when this might end, this advance on the Old City of Mosul?

That's the million dollar question. These things are very hard to gauge, so I'm a bit hesitant to give you a firm answer. But I'd be surprised if [Iraqi forces] managed to do it before a month, to be honest with you. It's just very, very hard going. And their intention is not to come out with the city completely destroyed, and all the civilians dead. If they had, then they just could have carpet-bombed the place and be done with it. But the fact is that they're just going to have to go by foot and clear the place room by room,

Many of these civilians coming out of the Old City of Mosul, are they also wary of the Iraqi troops, yes?

For sure, they've been hearing for the last three years that the security forces will kill them. And let's not forget that the Iraqi army's history in Mosul even before its fall into the hands of the Islamic State was not very good. There's a reason why the Islamic State was able to basically take over Mosul with a skeleton force of fighters, because the people there, they had had enough of the Iraqi army and for them anyone that came was seen as a liberator.

But that being said, many of them now have a different tune. And yes, they're wary. But for them it's better to come to the security forces than to stay under the militants.