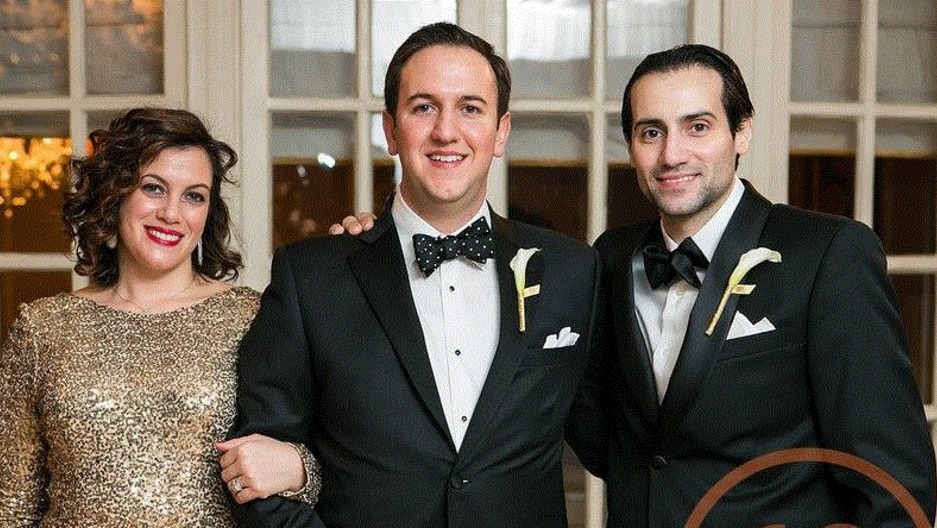 Victoria Jabara Williams with her brothers, from left, Rami Jabara and Khalid Jabara.

Haifa Jabara moved her family to Tulsa, Oklahoma, to escape a civil war. She thought she’d find peace in the United States. But last summer, her son was shot and killed

Prosecutors are calling the killing a hate crime. But the Jabara family isn’t sure the designation will make much of a difference.

“We escaped a country of violence,” says Haifa’s adult daughter, Victoria Jabara, who goes by Vicky. “And then, 30 years later, it ended in violence.”

The Jabaras are a Christian family from Lebanon. During the 1980s, their home country was a dangerous place. Haifa remembers huddling with her husband in a bomb shelter in Beirut.

“We were so terrified,” she says. “The kids go to school, we don’t know if they’re going to come back or not.”

After the move, Vicky and her two brothers had a typical American upbringing. They played video games and rode their bikes. They understood Arabic but spoke English. “When you move to Tulsa in the 80s as a foreigner, your goal is to assimilate,” Vicky says.

Vicky says her light skin helped her fit in. But one of her brothers, Khalid, had darker skin and a foreign-sounding name.

Khalid Jabara was a computer whiz. He loved wordplay in Arabic and English. Every Christmas, he would sing for the family. “He was a basketball superstar,” Vicky says.

After the siblings grew up and moved out, Khalid came back, to care for his sick father. Sometimes he’d visit the next-door neighbor, an elderly man who liked computers too.

Then, a few years ago, a man named Stanley Vernon Majors moved in with the neighbor. After living together as a couple, the two men got married. And life for the Jabaras started to change.

Vicky’s mother, Haifa, says the new neighbor yelled racial slurs — both at her and at her African American landscaper. She says Majors started calling her on the phone, and even taking photographs of visitors to her house. “How did he know my cell phone? I don’t know,” Haifa says.

Haifa sought and received a protective order against Majors, but the harassment escalated. In 2015, Majors ran Haifa down with his car, and she was rushed to the hospital with a head injury and broken bones. Local police arrested Majors and charged him with hit-and-run.

According to the Jabaras, the district attorney said Majors was not eligible for bail. “After eight months, they let him out without informing us,” Haifa says.

When she found out, she was so terrified that she started looking to move. Her husband uses a wheelchair, so the search took time.

A couple months later, on August 12, 2016, Haifa was out running errands when her son Khalid called from home. He sounded fearful and told her not to come home. “I just learned that this crazy guy has a gun,” he said.

Khalid called the police, but when they arrived, they said they could not enter the neighbor’s house without a warrant. So they left.

Khalid and his mother spoke on the phone one more time. “I heard everything,” Haifa says, distraught by the memory. “My son was screaming, yelling, ‘Help! Help!’ And I was not there to help him. I went crazy.”

Eight minutes after the police left, prosecutors say, Majors shot Khalid Jabara three times on the porch. He lay on the floor bleeding while his father called 911. Doctors pronounced him dead at the hospital.

Officer Jeannie McKenzie, a spokesperson for the Tulsa County Police Department, said that — although Majors had committed a violent offense and had a history of harassing the Jabara family — officers were powerless to prevent the crime. “We’re bound by the law. There’s certain things we can and can’t do,” McKenzie says. “Without a crime being committed, there was nothing we could do."

Khalid’s sister Vicky believes the police failed when they left without confronting Majors. “If it was an Arab or a black man that had a gun, I bet you anything they would go in,” she says. She and her mother Haifa say they’ve lost faith in the law.

“America is great. We love America. But the justice system failed us,” Haifa says.

Majors will go on trial in August. In addition to first-degree murder, he has been charged with a hate crime. That means prosecutors will try to prove that Majors harbors bias, and that bias motivated the murder.

In interviews with the police, Majors said the Jabaras were “filthy Lebanese” who “throw gay people off the roof.” He seemed to be referring to a graphic video released by ISIS.

Tulsa’s district attorney’s office didn’t want to comment on the details of the case. Neither did Robert Nigh, the county public defender who will represent Majors.

But Nigh was willing to speak about hate crimes in general, which he believes have become more common in recent years. “It seems as though they’ve gone up. We are more divisive than we used to be. We’re less tolerant than we used to be,” he says. “And that’s tremendously unfortunate.”

In Oklahoma, hate crime laws don’t lead to serious criminal sentences on their own. The state considers hate crimes a misdemeanor, not a felony. As a result, the underlying crime, like murder or assault, tends to take precedence.

Nigh believes hate crimes should be felonies. But he also believes that victims and the media should be cautious not to jump to conclusions.

Haifa Jabara described her son’s killing as a hate crime. But she wasn’t convinced that existing laws against hate crimes would help her family achieve justice. “What’s the difference, hate crime and a crime?” she asks.

Where hate crime convictions can make a difference is on the national level. Hate crimes are visible. Activist groups count them. It’s easier to mobilize around an act of hate than around a crime that’s seen as an isolated event.

Haifa Jabara says she hopes her son’s killer will be imprisoned for life or put to death.

Her daughter Vicky talked about the future. She has a young daughter of her own, who’s starting to understand what happened to Uncle Khalid.

“I haven’t talked to her about how violent he died,” Vicky says, her voice breaking. “We can’t accept the way he died. So violently. It must have hurt. What was he thinking? I mean, he was probably thinking, what did I do?

Vicky says that her daughter’s school, a Jewish day school in Tulsa, plans to open a library of tolerance in Khalid Jabara’s name. She takes heart from of the school’s daily mantras: “Peace begins with me.”