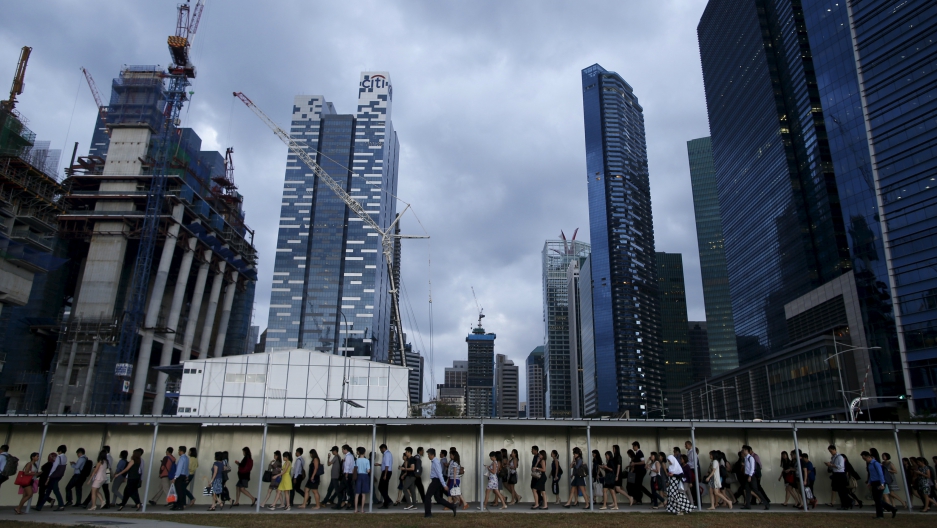 Commuters walk to the train station during evening rush hour in the financial district of Singapore, March 9, 2015.

After weeks of closed-door meetings, Senate Republicans on Thursday unveiled a draft of their plan to overhaul the US health system.

As the debate in the United States continues, we looked at another country that some commentators admire as a model for its ability to maintain high-quality care, while controlling costs: Singapore.

We turned to William Haseltine, author of "Affordable Excellence: The Singapore Healthcare Story," to explain.

Singapore’s health care system is fundamentally a government-controlled system. People pay for their primary care out of pocket, but they’re forced to save for that eventuality through mandatory savings accounts. If you have a catastrophic illness and you are hospitalized, you get heavily subsidized hospital care. The government also assures that no one in the country is left without health care. For example, if you can’t afford hospital care, the government may add money to your private savings account.

How does the country keep health care costs down?

Singapore controls the type of equipment used in hospitals, as well as drug prices. Eighty percent of the hospitals are, by law, public. Hospitals are also heavily subsidized (while primary care is mostly delivered by the private sector). The system is set up so that public hospitals compete with each other. There are five hospital groups in the system, and they all compete with each other. That competition helps keep costs down.

What lessons can we learn from Singapore’s success?

The first lesson is that you can deliver high-quality health care at about 25 percent of the price that the United States does. Other developed countries also deliver much better quality health care than the US does at half the price. The second lesson is to keep costs down by having people pay for minor health issues — like sore throats — out of pocket.

Could this model work in the United States?

It could. But it would be a real stretch. I think the idea of a mandatory savings account would be a difficult one for us to swallow. The idea that 80 percent of your health care hospitals will be publicly owned and managed would be also difficult. I think those are difficult concepts.