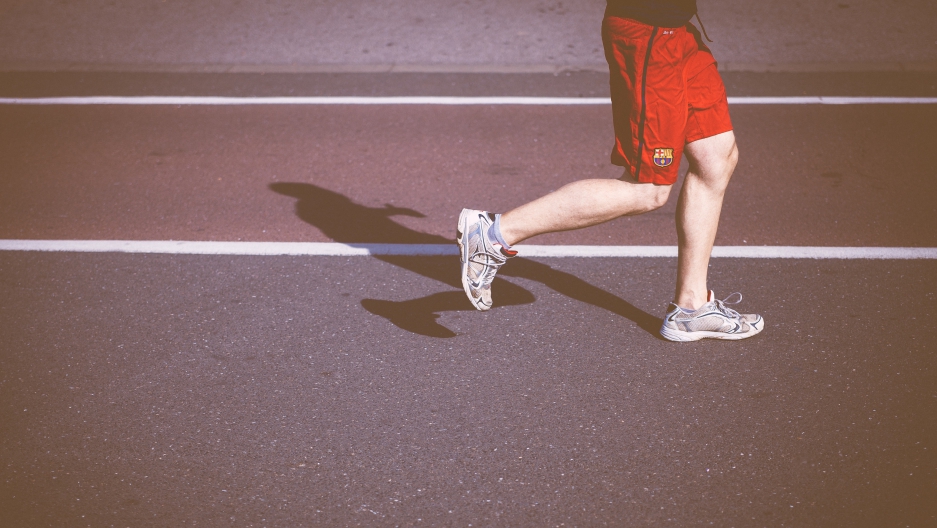 Researchers say that wearing the suit can cut the metabolic cost of a treadmill run by 5.4 percent.

Talk about suiting up for a jog — researchers have developed an exosuit that helps runners use less energy.

The ensemble is no stiff, Iron Man-style exoskeleton — it looks more like a pair of belted spandex shorts. In the study, recently published in Science Robotics, researchers say that wearing the suit can cut the metabolic cost of a treadmill run by 5.4 percent.

“So right now, it’s still, I would say, comparable to having the best possible shoes,” says Phillipe Malcolm, an assistant biomechanics professor at the University of Nebraska Omaha and one of the paper’s authors. “However, we’re sure that further improvements are possible, simply because this was just very preliminary research.”

When the suit is on, thin cables pull between the belt and leg wraps — like a second pair of hip extensor muscles. For now, the exosuit’s cables are powered by stationary actuators, not portable batteries — so, the technology isn’t quite trail ready. But already, Malcolm says, the suit has potential uses for treadmill-based physical therapy.

“And right now, it’s optimized for reducing the metabolic energy costs of running,” he says, “but it could be optimized for any other given objective — like, for example, reducing the strain in a particular muscle that’s injured. [That] would probably require some type of actuation with a different magnitude and different timing.”

In the study, researchers tested two cable-pulling patterns or “assistance profiles.” One was derived from normal human running posture, and the other, from a simulation of exoskeleton-assisted running. According to the Harvard press release, researchers found that the simulation-based profile — which pulled the cables later in the suit wearer's running stride — helped runners save more energy, beating the biology-based profile by about a factor of two.

With more research, Malcolm thinks the exosuit can further reduce the metabolic cost of running. Another goal? Making the suit portable — although he says its tethered version has been helpful for development.

“If you look at the past, at earlier developments on exoskeletons and exosuits for walking, that’s also how those developments happened first,” he says. “It’s done with what we call an off-board approach, so, the actuation unit is next to a treadmill. That gives the advantage that it’s much more versatile, much more programmable and that the person doesn’t have to carry the weight.

“And once we figure out which type of assistance is needed to assist the person, which appears to be quite difficult to find, then we can use that information for designing a portable device.”