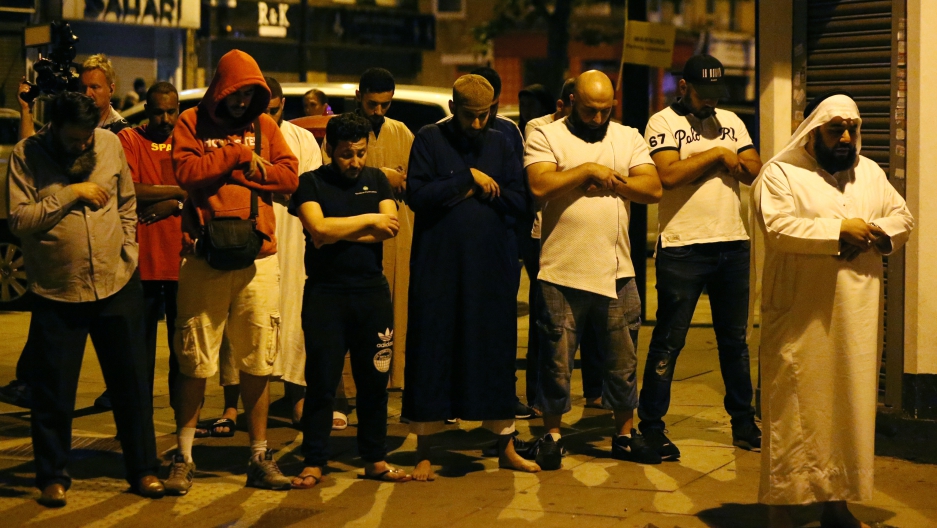 Men pray after a vehicle collided with pedestrians near a mosque in the Finsbury Park neighborhood of north London.

British Prime Minister Theresa May vowed Monday to fight extremism in all its forms after a white driver plowed his van into a crowd of Muslims near a mosque.

It was the fourth terror strike in a tumultuous four months in Britain.

Ten people were injured in the attack, which took place just after midnight on Monday after prayers in Finsbury Park, north London.

One elderly man, who had collapsed just before the incident, was pronounced dead at the scene, but it is not yet known whether his death was directly linked to the attack.

May condemned the assault as "sickening," saying Britain's determination to fight "terrorism, extremism and hatred ... must be the same, whoever is responsible."

The attacker has been identified as 47-year-old Darren Osborne of Cardiff.

Witness Khalid Amin told BBC television "he was shouting: 'I want to kill all Muslims.'"

Locals eventually pinned down Osborne, and the imam of the Muslim Welfare House stepped in to stop him from receiving a mob beating.

He was arrested on suspicion of "the commission, preparation or instigation of terrorism including murder and attempted murder," the police said.

London police chief Cressida Dick said the incident was "quite clearly an attack on Muslims" and promised a stepped-up police presence near mosques as the holy month of Ramadan draws to a close.

The Finsbury Park Mosque was once a notorious hub for radical Islamists but has changed markedly in recent years under new management.

Its former imam, Abu Hamza al-Masri, was jailed for life in New York on terrorism charges in 2015.

Despite the change in leadership and the focus on bolstering interfaith relations, the mosque reported it had received a string of threatening emails and letters in the wake of the Paris attacks.

Some locals came onto the street in support of the mosque on Monday, carrying signs saying "We love our mixed community" and "Leave our Muslim neighbours alone."

After the London Bridge attack earlier this month, London mayor Sadiq Khan's office reported a 40 percent increase in racist incidents in the capital and a fivefold increase in anti-Muslim incidents.

Khan said this attack on the mosque was a "horrific terrorist attack" aimed at "innocent Londoners, many of whom were finishing prayers during the holy month of Ramadan."

The mood in London

The World’s Leo Hornak lives in the Finsbury Park area and says the mood in London is somber, almost resigned.

When he woke at about 1 a.m. to the sound of a helicopter circling overhead, Hornak said, his first thought was another terrorist attack. “That's not the kind of reaction I would normally have to hearing a helicopter in London.”

Neighbors and people in the area have had similar reactions. “People are disgusted, they're horrified. Some are afraid even. But no one felt this was a surprise,” Hornak added.

Britain has gotten almost used to holding a moment of silence after a tragedy, he said, after four terrorist attacks in as many months.

“It's almost as though this country, and London, in particular, can’t actually keep up with the speed of horrendous pieces of news that are coming at a pace that no one is really used to.”

Agence France-Press contributed to this report.