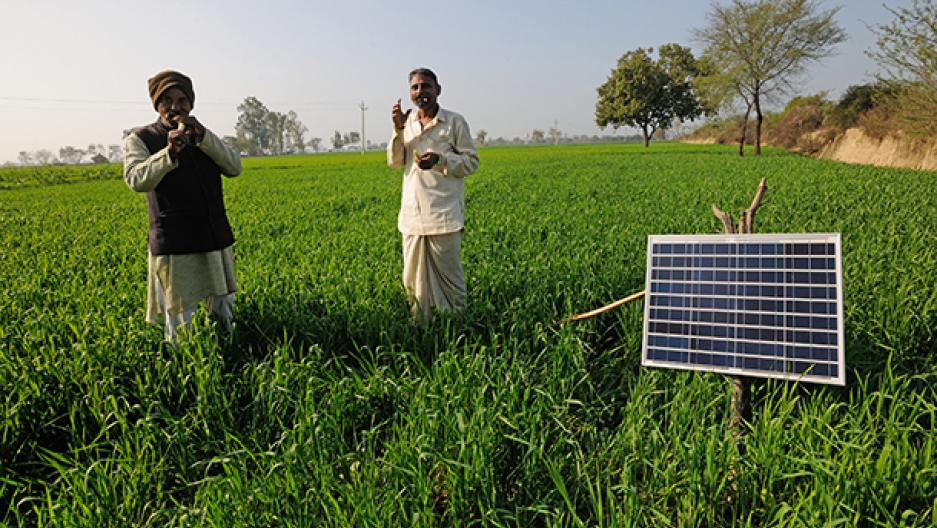 In 2015, at the climate talks in Paris, India's Prime Minister Narendra Modi spearheaded the launch of an international solar alliance to raise $1 trillion to light up the developing world. Eighteen months later, Modi has turned promise into action.

India, a country of 1.3 billion people, is becoming perhaps the world’s best example of the revolution in green energy.

“It's happening faster than anybody expected, because it was a gigantic promise,” says international environmental reporter Stephen Leahy, who has been writing about the energy transition in India for National Geographic.

“Many people were skeptical that they could deliver, but in just these last two years they have done remarkable things, in terms of creating a new approach to bringing energy to an awful lot of people,” Leahy says. “People thought that even if India [tried], they couldn't do it this quickly. The perception of India may be that it's a bureaucratic government that takes a long time to make decisions, that there's lots of red tape, but that seems not to be the case when it comes to this.”

Leahy says India is acting, in part, because it is so vulnerable to the weather changes created by climate disruption.

“They've got water shortages. They've had huge heat waves that killed hundreds of people. They've got the sea-level rise issue, with most of the coastal areas. There are threats to their monsoon, which their agriculture is completely dependent upon,” he says. “There are a whole range of real impacts already happening to India right now, and it's only going to get worse in the future.”

For India, the beauty of renewable energy is it's cheaper, and it's decentralized, Leahy says. In remote areas, where people have no electricity at all, “it’s much easier to install a small solar panel setup or a couple of wind turbines to provide energy,” he notes.

The other aspect that doesn't get as much attention is water usage, Leahy says. Coal uses billions of gallons of good, quality water to provide electricity, while solar and wind require almost none. In a country without sufficient water to grow its crops, this is a major benefit.

India’s massive market has helped drive down the costs of renewable energy, Leahy says. Globally, prices have been falling year after year, and right now, India is getting a lot of financing from banks and financial institutions who see there's money to be made.

“This isn't a charity project. This is a moneymaking venture for a lot of companies,” Leahy points out. “Those folks who are installing renewables are power companies who are borrowing money — millions of dollars — from banks, and they are planning on making some profits off of this.”

India has seen other benefits to renewable energy, too, Logan says. Right now, the country loses about 30 percent of the energy it generates, because of transmission line losses. By having decentralized solar power and wind, they've cut these losses and seen big savings in energy and money.

A primary difference between India and countries like the US is that India wants to use coal to supplement its renewable energy, rather than the other way around. India’s energy minister, Piyush Goyal, has said that India plans to build no more new coal plants for the next decade. They will complete the few that are currently under construction. In the interim, they are hopeful that they can slowly develop better batteries capable of storing renewable, intermittent energy.

“That technology has been a bit expensive, but it's coming along very quickly, as well, in terms of lower cost,” Leahy says. “So, in the future, they’ll be able to store renewable energy, and that will mean they can wean themselves off coal.”

India plans to add 160 gigawatts of renewable energy over the next four years and may reach that goal even sooner, Leahy says. By comparison, the US in 2015 had just over 100 gigawatts in solar and wind power, which took several decades to build out.

Can (or will) the US learn anything from India’s energy transformation? Leahy hopes so.

“They should understand that going back to coal is not the answer, that the day of fossil fuels is over, and that even a developing country with all sorts of social and other issues can make this rapid transition to renewable energy for the benefit of its citizens and for the benefit of their economy,” Leahy says. “They're building a 21st-century economy around renewable energy.”