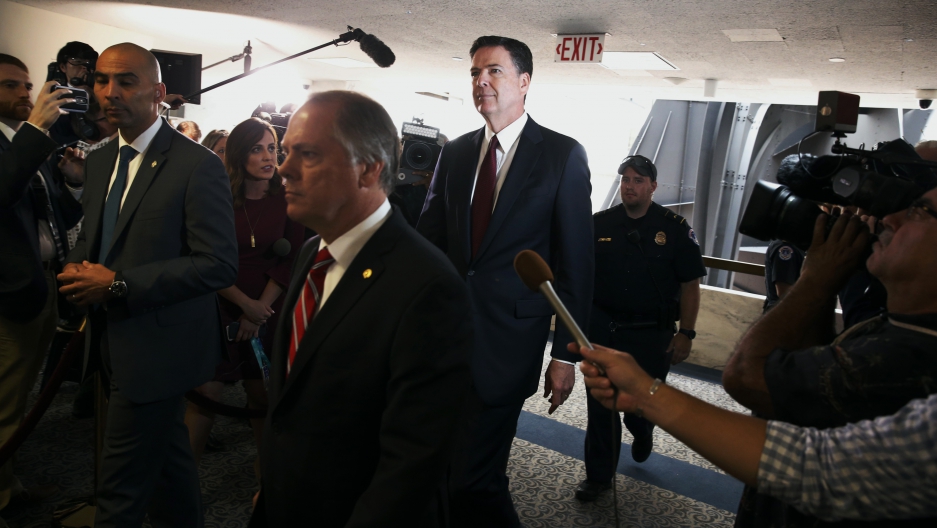 Former FBI Director James Comey (wearing the solid red tie) is escorted as he departs after testifying before a Senate Intelligence Committee hearing on Russia's alleged interference in the 2016 presidential election on Capitol Hill in Washington, on June 8, 2017.

While Washington and the media were preoccupied with James Comey hearings and Donald Trump press conferences this week, what else was going on that we didn't hear about? Or, ought to be paying closer attention to?

Nick Burns, the undersecretary of state for political affairs under George W. Bush, is a professor at Harvard’s Kennedy School. The World's Marco Werman caught up with him so he could remind us about some issues that may have been overshadowed by the latest drama in Washington.

Nick, can we start with North Korea? Because for a few days, people were casually worried about World War III. Then last week, I read about US tests on intercepting a missile, to see if they could blow a dummy North Korean missile out of the sky — the Pentagon said it worked. But then worrying news about more missile tests coming from North Korea, even coming close to an American aircraft carrier. What’s going on?

North Korea remains one the most important national security concerns of the United States. Here you have the 33-year-old leader who has nuclear weapons. He’s firing missiles, testing missiles against Japan and South Korea. He is irresponsible. And we haven’t figured out a way to push him back.

Obama had warned Trump that North Korea would be his biggest foreign policy challenge. Of all the many challenges Trump faces right now, do you think it really is number one?

I think it’s number one because South Korea and Japan are treaty allies of the United States — we would be obligated to defend them should either of them be drawn into a conflict or war with North Korea. Also vital because within three to five years, most experts believe that North Korea will have an intercontinental missile with a nuclear warhead on it, capable of reaching the West Coast of the United States. That’s an unacceptable threat to the United States.

Let’s talk about the US-led airstrikes in Raqqa and Mosul. Trump is following through on a campaign promise to "bomb the hell out of ISIS" — those were his words. But there has been a spike in civilian deaths. What do you think is going to be the political cost of Trump down the road because of this?

Well frankly, I think that President Trump has done the right thing here, to support the US military’s judgment — that we have to be assisting the Iraqis in a big way and pushing the Islamic State out of Mosul. And that we ought to be assisting NR, the Syrian Kurds and the Syrian Sunni groups — the democratic groups in Syria, that have begun the push against the Islamic State capital in Raqqa this week. It's very important that we defeat the Islamic State in both of those countries. But there are reports, consistent reports and admissions by the US government, of civilian casualties. So, great care has to be taken in how we exercise this fight.

And do you think that all this suggests that Trump is focused on ISIS anyway?

He appears to be if you look at his public pronouncements. What he emphasized in his trip to Europe, as well as Saudi Arabia, he’s very much focused on the fight against the Islamic State. The problem is, he has not been at all effective in enlisting European support because he’s alienated the Europeans by his refusal to reaffirm America’s commitment in NATO to the collective defense pledge — you know, 'all for one, one for all' under Article 5.

Barack Obama is also traveling around the world, meeting with foreign leaders — almost acting like a shadow president, or at least acting like a former president that many countries are nostalgic for. What do you make of all that?

President Obama, he has a right to travel, he formed a close friendship with Angela Merkel so he was in Berlin. He formed a close friendship with Justin Trudeau, the prime minister of Canada. You saw them have dinner together in Montreal the other night. He has a right to do that. I think he’s been quite restrained. The rule is, you don’t want to make life difficult for your successor. President Obama has not been commenting on everything Donald Trump has been doing. So, I think he’s acted honorably as George W. Bush did when he didn’t criticize President Obama at all during his eight years in office.

Nick, we watched the Comey hearings in a packed room on The Hill. Senators, lawmakers, their aides. Meantime, in other buildings around Washington, Trump still has lots of vacancies to fill. How are those vacancies affecting foreign policy?

I think in a major way. We've never had a government, I think since post-World War II, where, by early June the major leadership positions [were still] unfilled. The Trump administration has not even identified any of the undersecretaries of state — the 20 or so assistant secretaries of state. These are the leadership teams. I think it’s a concerted effort by people like Steve Bannon, to diminish the size and power of the federal government. It's extremely unwise. We have a powerful government to act in the world. So, I think this is something that needs to be corrected. But I think the direction has to come from President Trump, and he has said he does not intend to fill these positions. So, he’s made ghost ships of our federal government. And I can tell you that many of the people are ... patriotic civil servants believe that they are disconnected from the White House. That the White House is not listening to them. This cannot be the answer. We have the most inexperienced president and cabinet in recent American history. They should want to be reaching out to our very patriotic, dependable, loyal, career civil servants who are not partisan. [They] will gladly work for the Trump administration but they’re not being listened to.