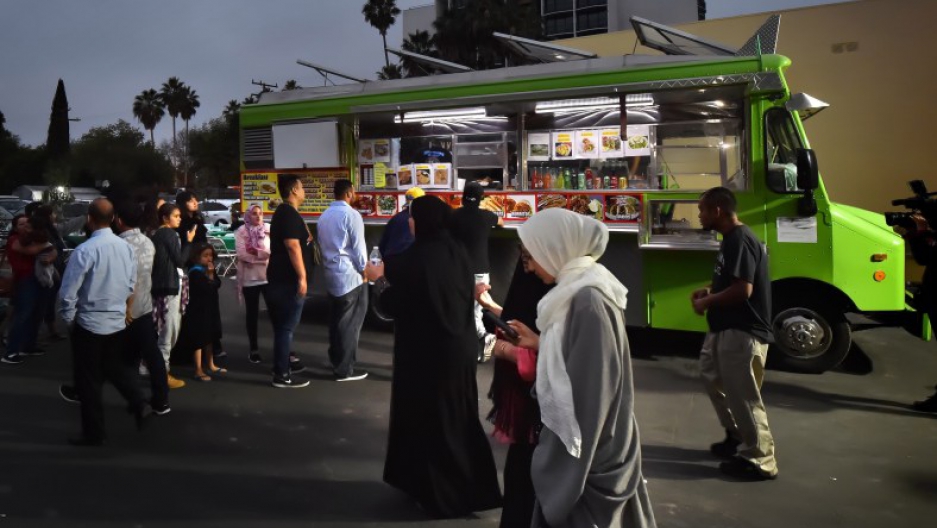 Members of the Islamic Center of Santa Ana lineup after sunset in front of a taco truck, part of Taco Trucks at Every Mosque, during an iftar meal, one of the religious observances of Ramadan as they gathering to break their fast together.

Good food has a way of bringing people together around a table. You could say food trucks do the same thing, but on the street and sidewalk.

That's part of the idea behind an ongoing campaign in Southern California called Taco Trucks at Every Mosque, timed to the Muslim holy month of Ramadan. And it has caught on fast in the parking lot outside the Islamic Center of Santa Ana, California, which largely serves the area's Indo-Chinese community (Indonesia has the world's largest Muslim population).

“It was so exciting to see people that have fasted... break their fast — many of them for the first time in our lives — to tacos,” says community activist Rida Hamida. She co-organized the campaign with Ben Vazquez, a history teacher in Santa Ana, and Resilience OC, a community non-profit. The campaign launched on Twitter as #TacoTrucksAtEveryMosque.

With fasting during daylight hours being a Ramadan tradition, they arranged for the community’s iftar meal to arrive in a bright green taco truck.

In a weekend of sadness, this is such a great photo: Mexicans serving up tacos to Muslims in OC as part of outreach effort @newsterrier pic.twitter.com/85BOGadwZh

But more than just sharing tacos, Hamida says the meal is a chance for Muslim and Latino communities to get to know each other.

“We are testing the waters with this new idea to introduce tacos to break Ramadan fast and it was a huge success," says Hamida, whose parents are Palestinian. She says that her father was on hand for the event and thoroughly enjoyed the experience as well.

“He's 70 years old and it was his first time trying tacos. He had, like, 10 tacos. Mostly he ate the meat tacos, carne asada and chicken,” she says.

They must have been tasty. Hamida says they prepared and served over 200 pounds of Halal chicken and beef tacos.

Part of the inspiration for the campaign is to challenge the rhetoric about Latinos that arose last year on the US campaign trail, especially the warning from one Latino activist, a Trump supporter, who warned that Latino culture is so strong, “you gotta watch out or there will be taco trucks on every corner.”

“We’re basically talking about how we can combat this fear," says Hamida. The movement, she added, is also designed to build "community during an administration that really has tried to break our spirit with the Muslim ban and the building of the border wall and separating our families and instilling fear." 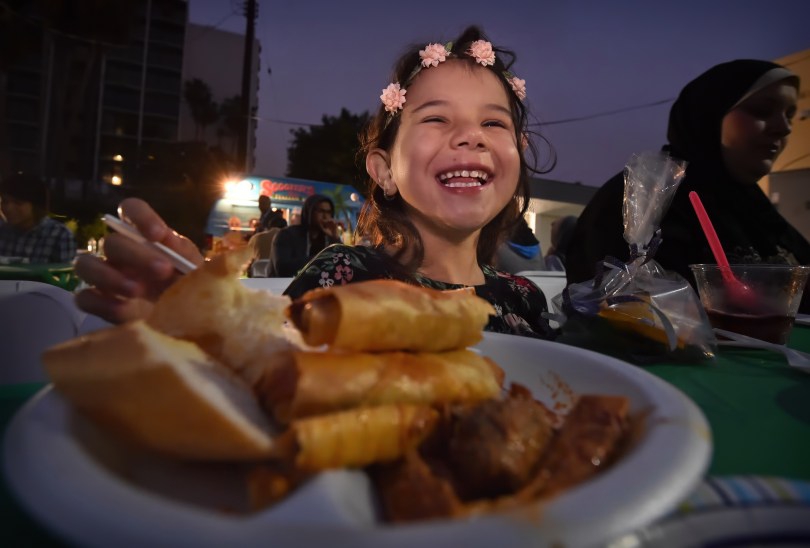 Yara Dalati, 5, of Anaheim smiles at her iftar meal, one of the religious observances of Ramadan, at the Islamic Center of Santa Ana.

"There is a lot of hate coming towards these two groups," Vazquez told a KPCC reporter, “and even between each other, there's prejudice. They get to see us interacting, and they get to interact, and we start breaking those [prejudices] down."

"People kind of lower their guards when they eat together, when they break bread," said Vazquez. "That they allow us in and share this very holy moment of breaking fast, how beautiful for us to be let in and enjoy tacos. It's just a kismet kind of moment."

Hamida hopes that the campaign will spread to other communities in the country. So far, a similar gathering is planned for the evening of June 14 at the Islamic Society of Orange County in Garden Grove, California.

“We're learning from one another. It's not a one-way conversation,” she says. “If it's [Donald] Trump's worst nightmare that we're going to bring a taco truck to every mosque, then he really needs to start changing his dreams of what his future of America looks like, because we are the future of America.”