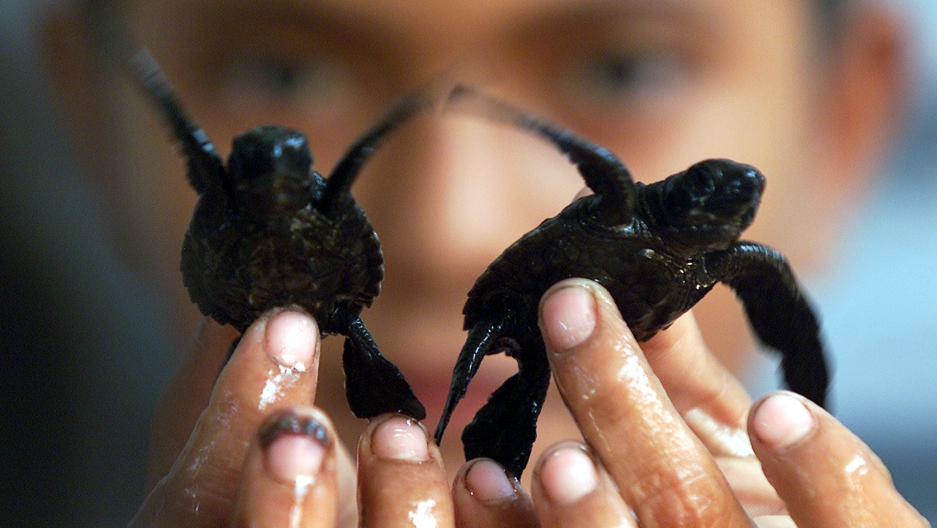 It's a bad time to be a sea turtle. They’re threatened by pollution — they die from ingesting plastic and get caught in fishing nets. Their habitat is being destroyed by coastal development — sea walls cut off their paths to nesting beaches.

And don’t even get me started on global warming.

As if all that weren’t bad enough, turtles must also contend with egg poachers.

Every year, the beaches of Nicaragua become one of the world's few spots where sea turtles go to lay their eggs en masse. And every year, millions of turtle eggs are stolen from those beaches, sold on the black market and eventually consumed in bars and restaurants. The eggs are considered aphrodisiacs (which may come in handy if the rhino horn doesn’t work).

This baby turtle hatched one hour ago. She's making her way into the ocean. The next time she will be back on this beach is 15 years from now, to lay her own eggs. (On assignment in La Flor, Nicaragua for @pritheworld )

In March, I took a trip to Nicaragua. I had a secret mission: smuggling in a counterfeit sea turtle egg, equipped with a GPS tracker, to plant in a suitable nest.

It all starts with conservationist Kim Williams-Guillen, who works for an environmental group called Paso Pacifico. Paso Pacifico strives to protect the sea turtles nesting in Nicaragua, with offices both there and in the US. 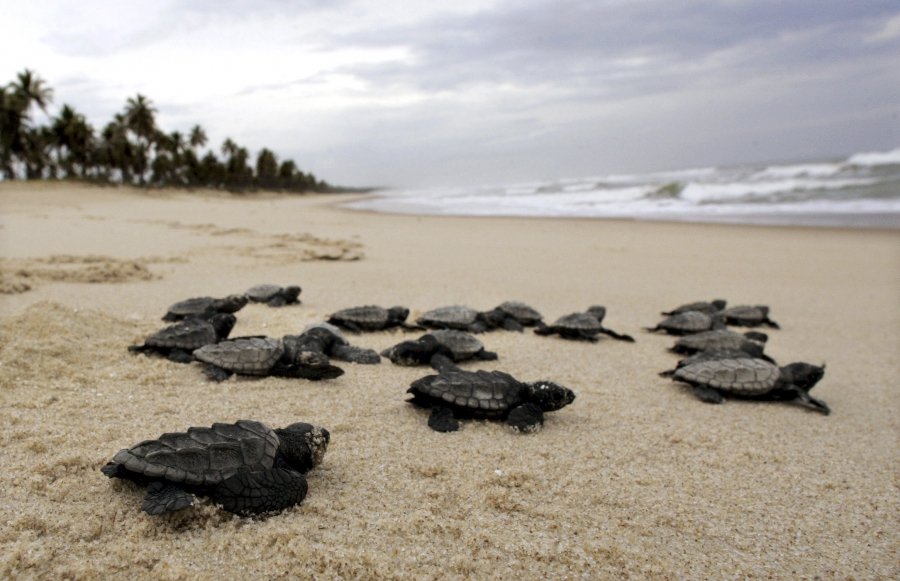 New born sea turtles make their way to the ocean.

Williams-Guillen had been racking her brain to think of ways to cut down on egg poaching, a leading threat to baby sea turtles. One day, while she was watching AMC's “Breaking Bad,” inspiration struck.

“In one of the later seasons of the show,” Williams-Guillen says, “the protagonist is in cahoots with the woman from a chemical company.” In the episode, the Drug Enforcement Administration (DEA) puts a GPS tracker on a barrel of chemicals the drug dealers are planning to steal, in order to track them back to the meth lab.

She decided to make a prototype fake turtle egg with a GPS tracker inside. Then, she planned to put the fake egg in a turtle nest. If poachers stole it, Williams-Guillen would be able to track where the eggs were going and who’s involved in the trade.

Williams-Guillen gets ready to put a GPS tracker in one of her fake turtle eggs.

Paso Pacifico got a $10,000 grant from the US Agency for International Development to put the scheme in place.

Sarah Otterstrom, the CEO of Paso Pacifico, says the goal isn't to nab local poachers. “We already know who those guys are,” she says.

The poachers are poor and are just trying to make some extra money, Otterstrom says. She’s after middlemen and the higher-ups in the chain — culprits at the top who are making big money.

“The people who receive the eggs as middlemen and [those] who move the eggs to large areas and across international borders are often aligned with criminal activity. We’re concerned with those wildlife traders and those wildlife criminals,” Otterstrom says.

And that’s where the fake turtle eggs come in.

Williams-Guillen makes them herself on a 3-D printer from her home in Ann Arbor, Michigan. She keeps the printer on a sewing table, tucked into the corner of her bedroom. A watercolor of a turtle wearing a bowtie and a fez hangs on the wall next to a needlepoint kitten.

Scattered everywhere are tools of the trade: heavy-duty sanders, paint, glue, little metal BB pellets used to add weight to the eggs. Paso Pacifico even turned to a prop designer in Los Angeles to help get the texture and the color of the egg just right. And it’s tricky.

“A turtle egg is white. And the shell is white,” Williams-Guillen explains. “But it has just a little bit of a yellow glow to it … due to the yolk inside.”

The texture also posed a problem: A sea turtle egg doesn’t feel like a chicken egg. It’s pliable and sort of leathery. Otterstrom says she took five prototypes of the eggs — all with a slightly different texture — to the International Sea Turtle Symposium in Vegas (yes, this is a real thing).

“Dozens of sea turtle scientists smushed them, and touched them and felt them,” says Otterstrom. “Then they voted on which ones they thought were most accurate.”

The finished project looks something like a Ping-Pong ball with a dimple in it.

The fake egg, once it's finished, looks like a ping pong ball with a dimple in it.

When the fake egg is slipped in with the real ones, covered with sand and sea turtle goop, the poachers will never be able to tell the difference — especially since poaching is done in the dark.

Two days before I’m scheduled to leave for Nicaragua, I receive an innocuous-looking package from Williams-Guillen. Inside are two faux turtle eggs with GPS trackers. I’m supposed to bring them on the plane in my carry-on luggage. At this point, my imagination starts to run away with me. What if I get stopped by the TSA? How would that conversation go?

TSA agent: What is this?

TSA: Does it contain liquid over 3 ounces?

Thankfully, it never came to that. I got the eggs on the plane to Nicaragua without a hitch. Unfortunately, my in-country undercover duties didn’t go as well.

On D-Day, I left my hostel late at night. Two rangers from Paso Pacifico picked me up in a truck and we drove over dirt paths to a deserted field. I powered up the eggs and slipped them in my backpack before setting out into the woods.

When choosing a beach, poachers tend to head to the remote ones, which are hard to find and surrounded by forest and lots of cover. 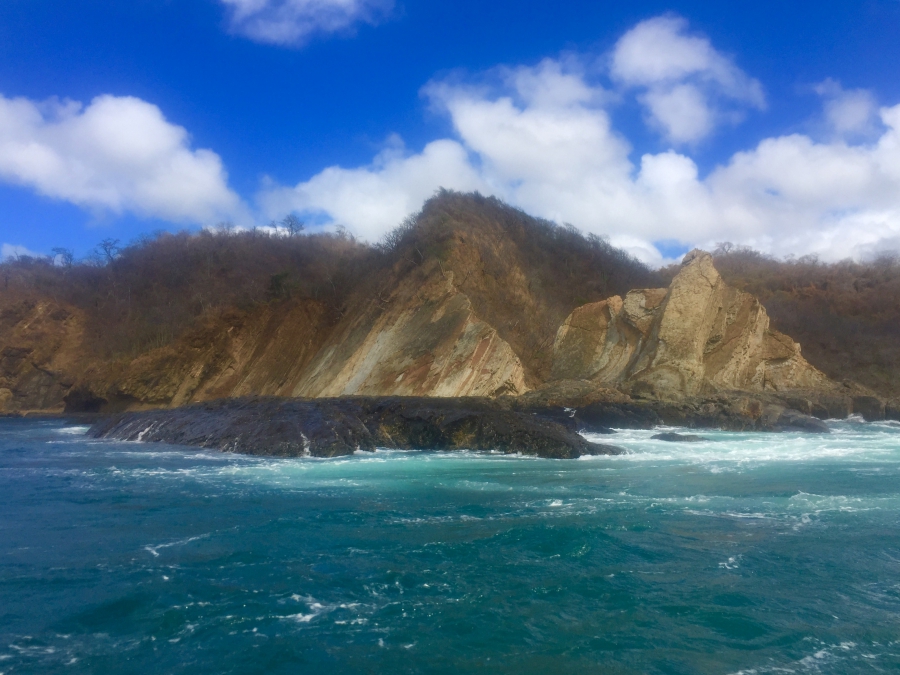 This beach, on the border of NIcaragua and Costa Rica, is a popular one with poachers. The only way to get to it over land is through the forest.

After about an hour of hiking, we finally reached an isolated beach. The rangers told me to switch off my flashlight and let my eyes adjust to the dark. Apparently, this is how you find nesting sea turtles.

I faced the surf and squinted.

“When you see something that looks like a boulder in the waves, it’s a nesting sea turtle,” they told me. 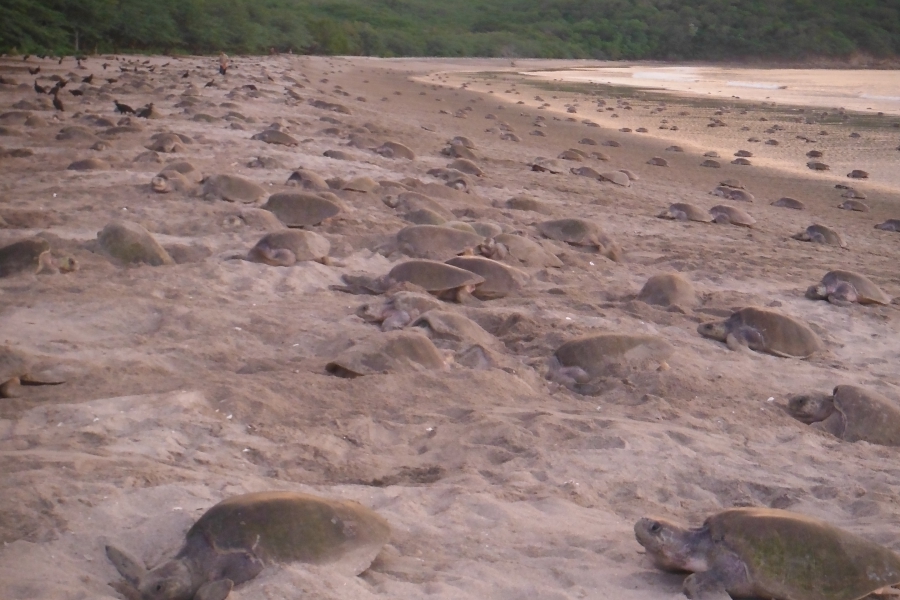 At the height of nesting seasons, hundreds of turtles can come to the beach to lay their eggs. The author, Sarah Birnbaum, had no such luck.

We stayed on the beach for three hours. In that entire time, I spotted a total of five rocks and zero turtles.

I trekked back to the car dejected.

The next day, I wrote Williams-Guillen an email telling her I failed my mission. She told me not to worry about it. While I was blundering around in the woods, she was tracking my movements on her computer at home. She was excited that the GPS was working.

This summer, Paso Pacifico hopes to deploy hundreds more fake eggs in the field. They plan to enlist locals and tourists to plant them. A similar project is also underway in Costa Rica, another turtle nesting hotspot. Eventually, the poachers will discover the fake eggs, so Paso Pacifico wants to gather as much location data as possible before that happens.

Once the conservation group has information about the trade routes, they’ll share the data with local and international law enforcement. It might even lead to arrests or stings.

As for me, I’m leaving the crime-fighting life behind me. “Breaking Bad” gives me nightmares, anyway.