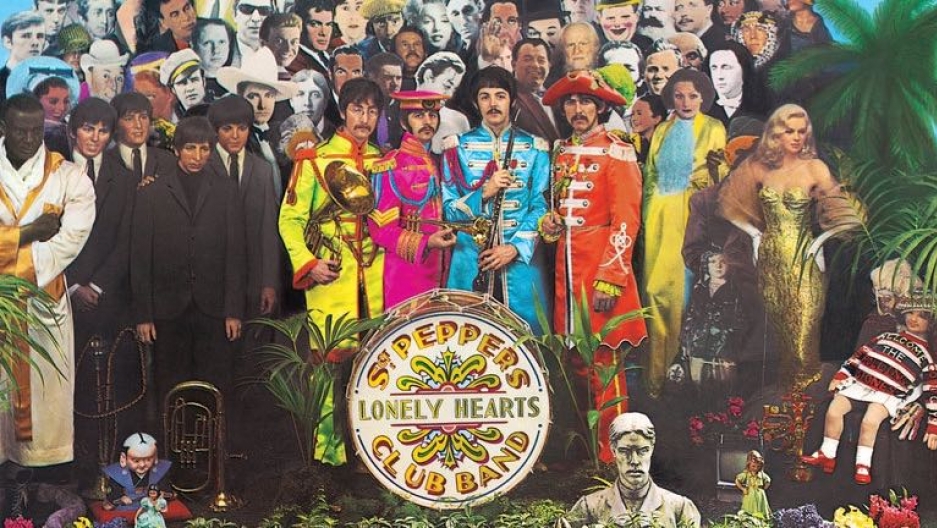 A portion of the "Sgt. Pepper's" album cover is shown here.

Maybe it’s the gobsmacking, hyperventilating pace of reality in 2017 that’s gotten the 50th anniversary of the Beatles’ “Sgt. Pepper’s Lonely Hearts Club Band” so much combing over and analysis and appreciation. Fair enough. So here’s one more take.

I have a memory from late June 1967. I was 6 years old, and my family and I were a few days away from moving from New York City to Chapel Hill, North Carolina. We went uptown to visit my godparents, Aunt Dorothy and Uncle Ernest. Ernest Pendrell was a documentary filmmaker for ABC News, back when network TV made documentaries. He gallivanted around the globe, telling stories about the day in the life of a Marine in Vietnam. Or visiting the Vienna Boys' Choir. I thought what he did was important and exciting.

I loved visiting them because they were doting and, not insignificantly, they had a penthouse apartment on West 34th Street with a garden and a great view of the Hudson River. Uncle Ernest told me to come into his study, and he pulled "Sgt. Pepper’s" off the shelf and placed it on the turntable. “Mah-co,” he said to me in this voice stained with pipe smoke and a vaguely British affect, “this is what the boys at Hah-vahd are listening to.” I heard the opening commotion of the orchestra tuning up, inviting me in, then the fierce guitar. And then as usual with family visits, someone came in and the music was interrupted and that was that.

The next encounter would get me as far as “Lucy in the Sky With Diamonds,” the third track, before getting interrupted. That was at the house of a political scientist at UNC whose family was friends with mine. More than the bit of music that I was hearing though, were the faces on the cover of the album that had me spellbound. My young mind surmised that somehow this music was connected to history and the wider world, and that was cool. Karl Marx. Albert Einstein. Lawrence of Arabia. And these pop culture icons like Edgar Allan Poe and Bob Dylan and Oliver Hardy. And all this crazy music goes with it? I was hooked and I hadn’t even heard the whole thing.

When I got ready to leave for what started as two, then turned into five years in West Africa, that copy of "Sgt. Pepper’s" was one of the first albums I dubbed onto cassette to take with me. Sunday mornings would often be a mix of it along with the likes of Chief Commander Ebenezer Obey from Nigeria on cassette.

When I made the transition to CDs in 1990, "Sgt. Pepper’s" was included in the first purchase of 10 discs I allowed myself to jump-start that collection.

And now I listen to the original mono mix, the one that came out remastered on CD in 2009.

The songs on the album are stories, and for years, I’ve known the people in them intimately: Billy Shears, Lucy, that mean narrator who beat his woman, that other sad woman who is leaving home, the Hendersons and Mr. Kite, and Lovely Rita. They’ve followed me like family.

Thing is, speak with any number of musicians from around the globe, and they’ll cite the Beatles and albums like "Sgt. Pepper’s" precisely because the songs told stories. Artists like Angélique Kidjo and Baaba Maal and Gilberto Gil also know these characters. They’re their family, too.

Over the years, I’ve interviewed those artists and heard how the Beatles influenced them. That's felt like an affirmation of what I deciphered as a kid from the album cover’s surreal, visual code to the world and history. This record was part of the larger globe, not just a psychedelic reflection of "All Hail Britannia" and swinging London in the '60s.

I think about that bit because sometimes it feels like the volume of stuff I’ve heard over time is exactly that. Like Klein’s bit, a figurative truck delivered to me Cantata 82 by Johann Sebastian Bach, Johnny Cash’s “I Walk the Line,” “Happy Birthday to You,” Lithuanian language records, albums like Baaba Maal’s “Firin' in Fouta” and “Sgt. Pepper’s.” It’s all been in my aural mix for decades. And to this day, “Sgt. Pepper’s” always seems to be next to the CD player, part of the select stack of discs that are in rotation at my house. It’s one of those records that feels totally familiar and filled with numerous memories, and yet I still discover new things in the songs or see the characters differently.

Six years after my family left New York, my mom took my sister and me back to visit, and we dropped in on Aunt Dorothy and Uncle Ernest, still on West 34th. That was the summer of 1973. Once again in his study, this time he pulled Pink Floyd’s “Dark Side of the Moon” off the shelf. It had just come out. “Mah-co, let me play you what the boys at Hah-vahd are listening to.” He was a character. I smiled. He was hip, I gave him that.