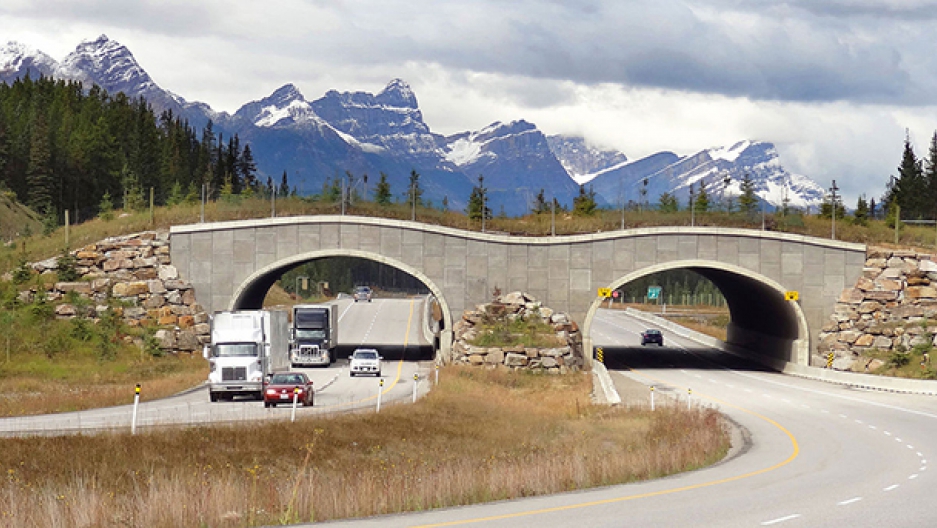 A wildlife bridge helps critters safely cross the TransCanada Highway near Banff so that their habitats are connected. E.O. Wilson calls for an extensive, connected network of ecosystems to be reserved for nature in North America.

Distinguished Harvard biologist E.O. Wilson has won two Pulitzer Prizes, including one for a book on ants, and has been studying the challenge of species loss for years, focusing on unique habitats that should be conserved to protect the diverse ecological webs within them.

Now in his book, "Half-Earth: Our Planet's Fight for Life," Wilson says we can preserve the bulk of species and ecosystems if we set aside half of the Earth’s surface, both land and sea.

“The conservation movement around the world has been doing everything possible in a conventional worldview, with nobility of purpose, with enormous energy and effort and dedication. It has saved a lot of species,” Wilson says. “But what most people don't realize is that, in addition to those beautiful, big animals that we so admire and we see going extinct or are up to the brink of extinction, there are literally millions of smaller creatures that are the foundations of our ecosystem, both on the land and the sea, and that they, too, are probably disappearing at about the same rate. So, we simply are not doing enough.”

One-fifth of Earth’s vertebrates are “sliding down at a pretty rapid rate and going off the cliff to extinction, and of that one-fifth, we're losing, even with our best efforts, 80 percent or so,” Wilson says. “So, we need something completely different.”

Wilson calculates that humans could set aside half of the Earth primarily for the millions of other species that inhabit the planet with us and save about 80 to 90 percent of the species, which would bring the extinction level down to what it was before the arrival of humanity.

As an example of how this could be done, Wilson proposes what he calls “squaring America.” The US could increase the current 10 to 15 percent of land and sea it now sets aside for conservation to about 50 percent simply by creating links and corridors among all these places — in essence, creating a reserve roughly equivalent to the lines of a massive square.

Wilson acknowledges that the majority of people don't share his sense of urgency about species loss. He chalks this up to human nature — which he sees as a combination of evolutionary imperatives and stupidity. That is, we survived as a species, in part, because we do so many stupid things, including "constant war and tribal battles, internecine civic strife and conflict between religious faiths."

“Our stock was the one that got hold of the capacities for language and dividing labors of cooperating groups,” he continues. “Our human ancestors were the one species that got out from Africa about 65,000 years ago, and, of course, as they multiplied in Africa itself, they would enter whole new natural environments. Everywhere they went, they found survival by utilizing everything they could get their hands on in that pristine environment.”

They began by killing off the native birds and mammals for food and then wiped out much of the plant environment when they developed agriculture about 12,000 years ago, Wilson explains. “That meant spoiling the original environment. We survived. We multiplied. We were Darwinian.”

“Those among us who did the most damage to the environment, to our benefit and riches, were the ones who typically got ahead of the competitors in the next area over,” he continues. “Surely that has had an effect on the evolution of human rapaciousness when it comes to dealing with environment.”

“That's why it makes it so hard to say, ‘Please halt and reconsider before you mow down that rainforest. Please consider leaving enough space on the surface of the Earth and the sea for those estimated 10 million other species that exist and which we are wiping out at a rapid rate,’” he says.

Reducing ecosystems by allowing species to become extinct weakens the system as a whole, making it vulnerable to accelerating change and collapse, Wilson says. He believes the human race is “racing toward almost lethal conditions for life as a whole if we continue on our present path.”

Perhaps paradoxically, Wilson is optimistic about the role technology could play in conserving biological diversity. The digital revolution may, at first glance, seem bad for the natural environment, but Wilson believes it has qualities that “point to a lessened size of what's called the ecological footprint.”

“Ecological footprint is the amount of area — of space, if you wish to make it three-dimensional — required by the average person to maintain, for that one person, all the necessities of life,” he explains. “These range from food to water to shelter to entertainment to governance and on and on. For most of the world, it's one to 10 acres, depending on the country. For America, it's much higher than anybody else, and it's not sustainable.”

Wilson believes the digital world will shrink our ecological footprint because of “the nature of economic evolution: People want and they will select, if they have any choice, instruments and material goods that are smaller, consume less energy and material, and need to be fixed less frequently. All of that means that the ecological footprint is destined to shrink,” he says.

“If we can now keep our hands off the natural areas in the world, if we can devise entertainment and fulfillment making use of all of the accoutrements and monuments of digital age, and develop a conservation ethic, I envision a possible paradise for humanity by the 22nd century,” he concludes.