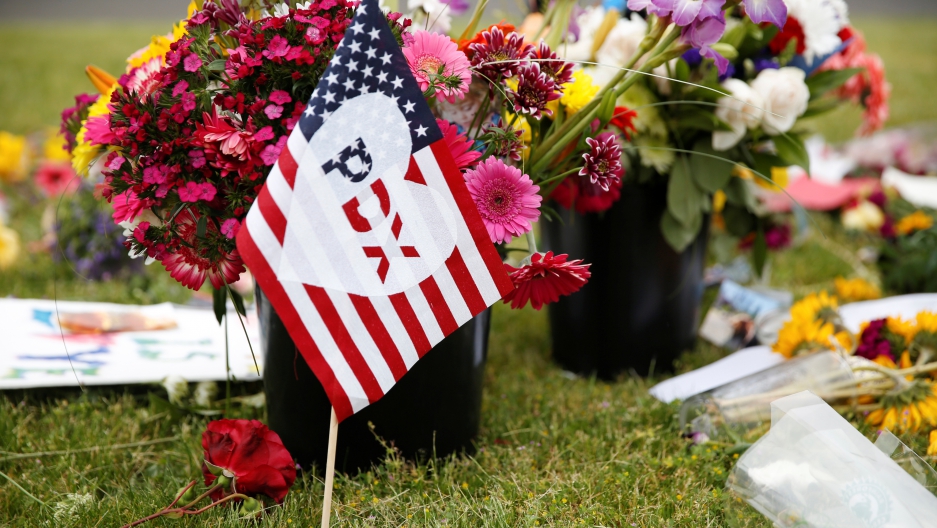 A flag bearing an abbreviation for "Portland" stands at a makeshift memorial for two men who were killed on a commuter train while trying to stop another man from harassing two young women who appeared to be Muslim.

Two good Samaritans were fatally stabbed in Portland on May 26 while trying to help two young women being harassed by a white supremacist.

Taliesin Myrddin Namkai Meche, 23, and Ricky John Best, 53, stepped up to help and were killed. A third man, Micah David-Cole Fletcher, was also stabbed but is expected to recover.

The Portland community is rallying around the families of those affected, but the attack is once again raising questions of what it means to be a good bystander.

Debjani Roy is the deputy director of Hollaback, a nonprofit that offers bystander intervention training. She calls the men’s actions "heroic" — “these people had the absolute best intentions. They were considering someone else that they did not know, above themselves.”

The goal at Hollaback, Roy says, is to make sure tragedies like this don’t happen again by educating the public about the “5 Ds of bystander intervention.”

Direct intervention is confronting the harasser — saying something like “that’s not ok,” “leave that person alone,” “that’s racist.”

The first thing to do, says Roy, is to assess the situation: evaluate your safety, and evaluate the aggressor. Direct intervention, the approach taken by the men in Portland, is also the most risky approach. “There is a possibility of escalation. There is a possibility that a harasser might redirect their anger or aggression towards you.”

Distraction is an indirect approach to intervention that involves engaging with the person who’s being harassed — not the aggressor — and trying to de-escalate the situation.

“You go up to them and say — ‘do you have the time,’ or, ‘I'm lost, can you tell me how to get to Smith Street?’” Roy says. “It's a question of talking about something that's going to take the attention away from the harassment, and that's going to lead the conversation in a different direction.”

Delegation is involving a third party, usually an authority figure.

On a train, that could mean the conductor. In a store, a cashier or security guard. Or, Roy says, it could just mean working together with another bystander so you’re in the best position to intervene — “they can engage with the person being harassed while you contact the authorities.”

Intervention doesn’t always need to happen while someone is being harassed. It can be as simple as asking someone if they’re OK after something happens. “You could go up to the person who's been targeted and keep them company, and just stay with them,” Roy says. “In some cases, a situation might require you both to move to another location.”

Documenting harassment with pictures or videos is another way to be a responsible bystander.

“First, check in to see if anyone else is intervening in some way. If they’re not, use one of the other Ds,” Roy says. “If they are, check the legality of documenting where you are, and then keep a safe distance and take video of landmarks — street signs, bus numbers, and save the date and time.”

The one thing to keep in mind, Roy stresses, is to never take video and put it online without the permission of the person who was being harassed. It could “cause a lot of harm,” she says.

Whatever tactic you use, Roy says the key is preparation. Think about it beforehand, and decide on a strategy you think you can execute. Rehearsing can help you make decisions more quickly in a heated situation. And tailor your bystander strategy to fit your identity and personality.

“Being a person of color, and an immigrant woman — and small,” Roy says, with a laugh, “I would not necessarily use direct intervention. I might use delegate or distract instead.”