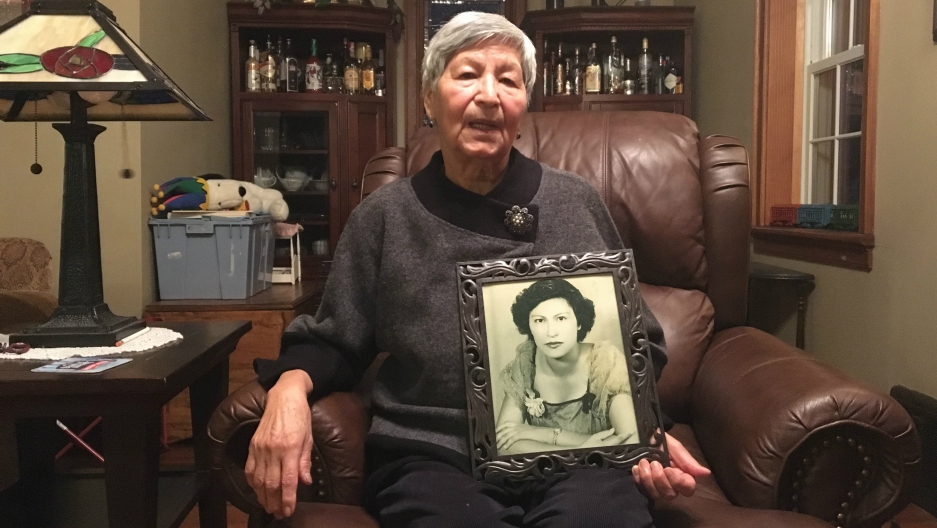 Francisca Carmona Garcia holds up a picture of herself, taken in the 1950s, shortly after she left La Perla. She was trafficked as a teenager, from Guadalajara to the US-Mexico border.

A couple of months ago, a friend of mine reached out. It was about her grandmother, Frances. Grandma Frances is 85. And my friend told me her grandma says she has a story she needs to tell someone.

So, I headed to their house.

Grandma Frances is tiny and thin, with a shock of white hair and brown eyes that are always smiling, even when she isn’t. She talks with that loud, Queens accent that sounds like she’s chewing on the words before she speaks them.

But secrets have a language of their own. And Grandma Frances insists she will only tell me this story in her native tongue, Spanish.

She starts off by telling me that she was born Francisca Carmona Garcia, in Jalisco, Mexico.

And when she speaks about Jalisco, her eyes light up.

"The men are handsome there," she gushes. They ride their horses with a gun on their side.

I ask her what her favorite childhood memory is and she says — leaving. Garcia's family was poor.

"We ate seeds and tortillas, with some chile. And it tasted good because we were hungry."

She tells me her little sister died of starvation. When Garcia was 14, she left home to go to Guadalajara. She got a job as a maid and started sending money home. But money was still tight. And Garcia had bigger dreams ...

"El Norte," she says, with a hint of awe still in her voice.

She means "The North." The United States.

It was the 1950s. The decade of prosperity and US cultural expansion. Rock 'n' roll was born. Marilyn Monroe sang breathlessly about diamonds, her "best friends." John Wayne was flying airplanes and Marlon Brando was riding A Streetcar Named Desire.

Garcia got her big break one day at work when she was 16. An older woman approached her and said, "we’re looking for waitresses. Right on the border with Texas. A tiny town called Villa Acuña. At a restaurant called La Perla — The Pearl."

Garcia packed up and headed there, to her new job, waiting tables. It was about a day's travel. But when she finally got to town, well, there was no restaurant. There weren’t even streets really, she says. The Pearl was a house in the dusty middle of nowhere.

It was a brothel.

"You gotta do what you gotta do," she says, resigned. She never imagined this would happen to her, though. And she didn’t have a choice. "I was the breadwinner in my family," she explains.

This all happened when she was a teenager.

"They gave us our room and told us to dress very pretty and go out to the salon because it was full of American soldiers." The brothel, she tells me, exclusively served the American military — who came in from across the border in Texas. Mexican men didn’t set foot in The Pearl, but the Mexican police protected the place and watched over the girls.

Once a month, Garcia says, "the doctors would come give us checkups."

It’s strange, hearing this sweet little grandma tell me the tale of how she was trafficked while she insists that I finish a giant plate of tamales she made for me. But none of this is unusual. Mexican border towns have always served as places of vice and exploitation. Sex tourism is a lucrative business even to this day. Between 2011 and 2012, authorities report that more than 9,000 women have gone missing throughout Mexico.

And that’s just the reported cases. 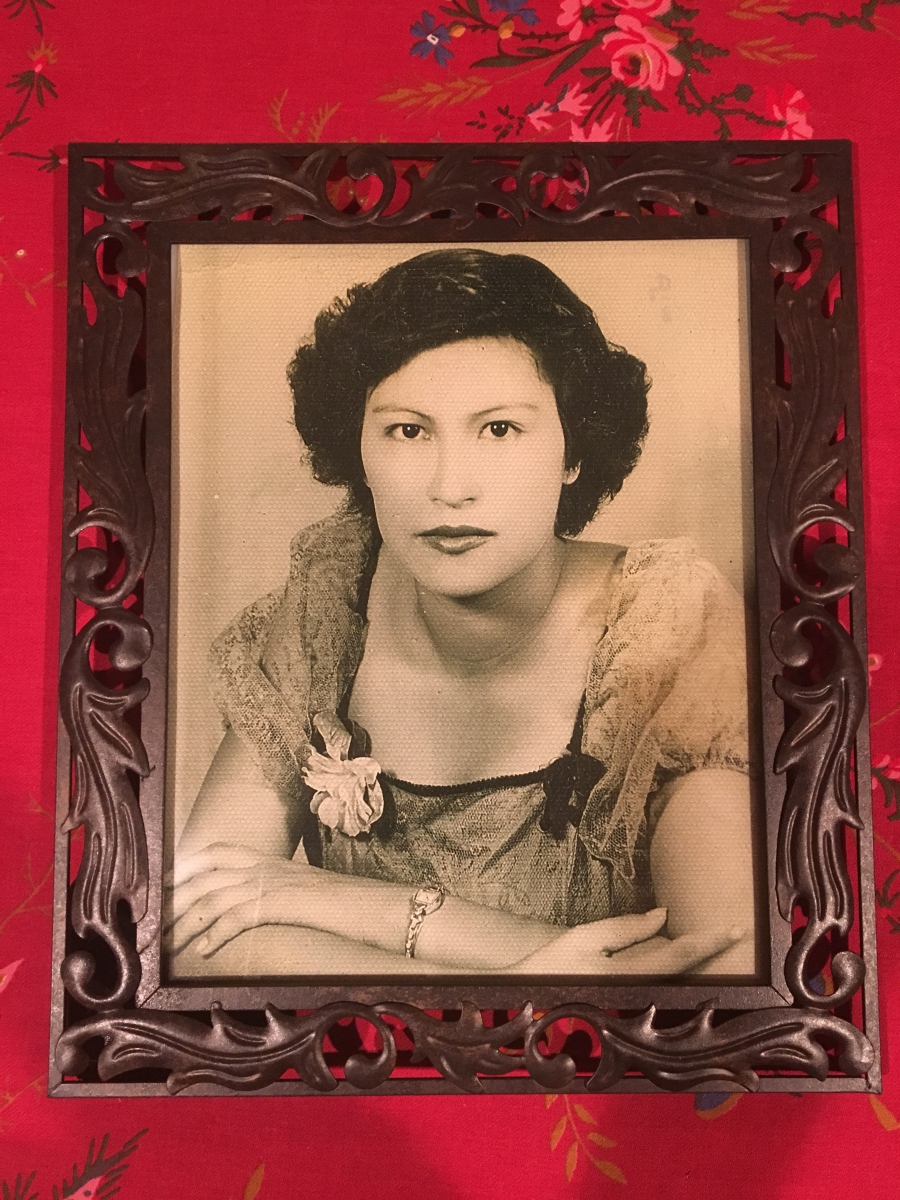 This is a picture of Frances, taken in the early 1950s, shortly after she left La Perla.

But Garcia doesn’t tell her story like other trafficking survivors I’ve spoken with. She talks about how lucky she was. A friend of hers, who got taken to another town — she was killed. Garcia talks about a kind, gorgeous madam, who let her keep some of the money she earned. Important men in uniform, who were gentlemanly. I leave her house a bit perplexed. But her tone shifts the next time we talk, when she invites me over for lunch.

As she ladles a thick oxtail soup on my plate, she tells me, “You know. This is a great shame in my life. I want you to understand, I was desperate.”

"It’s an ugly thing," She tells me. "You have relations with a man you don’t want. You just close your eyes, and you let it happen. It’s false. You ... do it out of necessity, not desire. You know nothing about love. You know nothing of kissing with that passion."

I ask if she’s angry. And she pauses and responds, “Yeah. At myself.”

So I ask her. Why are you telling me this secret? Why now? Why ever?

"I don’t know," she says, then hesitates. "I don’t know why. I think there was something here," she says as she rubs her narrow chest. "Something inside me."

Garcia does know how much she wanted to leave that place. She says she always told herself, "I gotta marry an American."

So one day, this customer came in. He was tall and handsome, a sergeant in the US Air Force.

His name was William.

"He was so elegant," she gushes. "He was wearing a blue shirt and a tie. He was almost 6 feet tall."

That night, they took a walk. The moon was beautiful.

"And he fell in love with me. And then he said — I want you to get out of here," Garcia recalls.

Did they really fall in love? Does a teenager who is trapped and needs so much to get out of where she is — truly love the one man who can rescue her? A customer at the brothel? Every time I asked, she replied the same.

"I fell in love with him. I loved that man."

They got married, and William brought her to New York. They came by bus. It was 1952. They arrived at the Port Authority Bus Terminal, Manhattan’s hectic, congested central bus station that stands to this day.

I meet her there early on a Saturday.

She’s eager to take me to her neighborhood in Queens and introduce me to all her friends.

After about an hour on the subway, we arrive. We walk along the busy boulevard and the quiet, lush suburban streets. Although today it's filled with people speaking Spanish and bumping reggaeton out of car windows, Grandma Frances was the first Latina to live here. Her new family advised her not to speak Spanish to her children. Back then, this was mostly an Italian neighborhood.

She says when she got here, "we took a taxi, to the house. To my mother-in-law's house." She remembers it was cold. She had never seen snow and was afraid of it.

"I was afraid I would freeze," she laughs.  It was 4 a.m. It was dark. She couldn’t see anything.

She didn’t know back then that everything was going to be OK. That she’d be part of a big family who adored her.

As her new husband knocked on his family's door, here’s what she did know: Something really bad had happened to her. And it's something that happens to women all the time, to this day. It was a secret she would think about sometimes, but would never tell anyone about, not for another 60 years or so — as a widow, with grandchildren.

Francisca Carmona Garcia, better known to the many people who love her as Frances, was finally home.