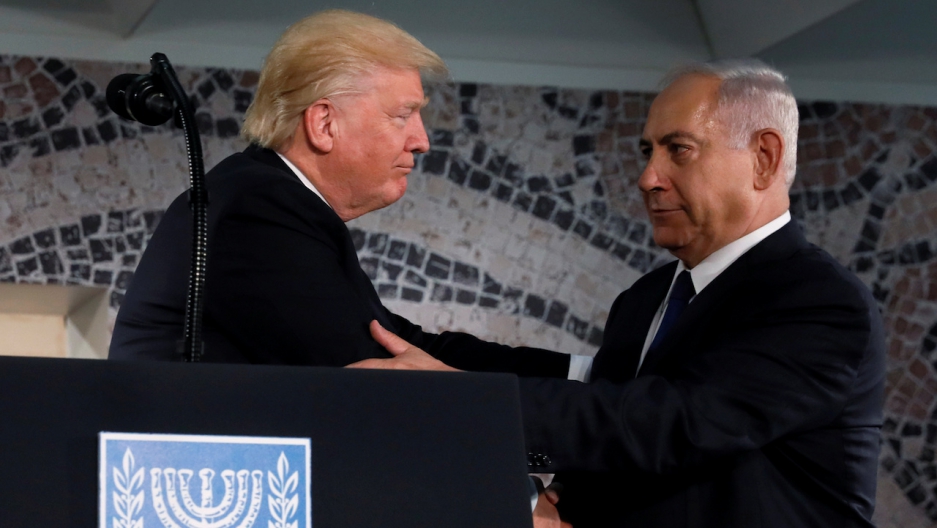 US President Donald Trump embraces Israel's Prime Minister Benjamin Netanyahu before his remarks at the Israel Museum in Jerusalem, on May 23, 2017.

As he concluded his visit to the Middle East on Tuesday, US President Donald Trump championed the Gulf states and pitted himself as the world’s chief antagonist against Shiite Iran and its proxies, ISIS, Hezbollah and Hamas.

The Israeli diplomats and officials invited to hear the speech live in Jerusalem were delighted, rewarding Trump's remarks at the Israel Museum with frequent applause and numerous standing ovations.

“Believe me, Iran will never have a nuclear weapon, that I can tell you,” the president told his excited audience, as a beaming Israeli Prime Minister Benjamin Netanyahu nodded in satisfaction. “Iran’s leaders routinely call for Israel’s destruction. Not with Donald J. Trump.”

Trump’s strategic re-positioning in the region has two parts. The first is the reversal of the Iran nuclear deal framework, brokered by former President Barack Obama in 2015, which calls for a restriction of Iran’s nuclear capacities in exchange for significant economic incentives from the West.

Netanyahu had ferociously opposed the Iran deal, claiming it posed an existential threat to Israel. He even attempted, unsuccessfully, to undermine Obama’s efforts by circumventing the White House and addressing his objections directly to Congress.

Referring to the deal, Trump told the Israeli public on Tuesday, “We not only gave them [the Iranians] a lifeline, we gave them wealth and prosperity. And we also gave them an ability to continue with terror … no matter where we go we see the signs of Iran in the Middle East. … Instead of saying thank you to the United States, they now feel emboldened. … It was a terrible, terrible thing for the United States to enter that deal.”

The second part of Trump's strategy entails building a coalition against Iran and its Shiite proxies with Saudi Arabia and other Gulf states. And as part of that coalition-building, the United States will “encourage” the Gulf states to normalize their relationship with Israel, once Israel reaches an agreement with the Palestinians and withdraws from the West Bank.

Said Trump, “There are those who … say that we must choose between supporting Israel and supporting Arab and Muslim nations in the region. That is completely wrong. All decent people want to live in peace, and all humanity is threatened by the evils of terrorism. Diverse nations can unite around the goal of protecting innocent life, upholding human dignity, and promoting peace and stability in the region. My administration is committed to pursuing such a coalition, and we have already made substantial progress during this trip.”

This idea of what New Yorker contributor Nathan Thrall called an “outside-in peace process” isn’t new. It dates back to the Arab Peace Initiative, first presented by the League of Arab States in 2002, and is based on the promise that the Arab states will normalize their relations with Israel once the Israeli-Palestinian conflict is resolved. But in his statements, Trump seemed to imply that he had reached some tentative agreements that would allow Israel to step toward normalization before, rather than after, resolution of the Palestinian-Israeli conflict.

Meir Javedanfar is an Iranian-born Israeli who teaches contemporary Iranian politics at a private research university in Israel, the Interdisciplinary Center Herzliya. He says Israel already has some limited partnerships with Saudi Arabia and other Gulf states in the field of intelligence, although officially they have no diplomatic relations. Commercial Israeli flights aren't even allowed to fly over Saudi Arabian airspace.

Which is why Israelis of almost all political persuasions were excited to see Air Force One touch down Tuesday from Riyadh, marking the first official direct flight from Saudi Arabia to Ben Gurion Airport in Tel Aviv. 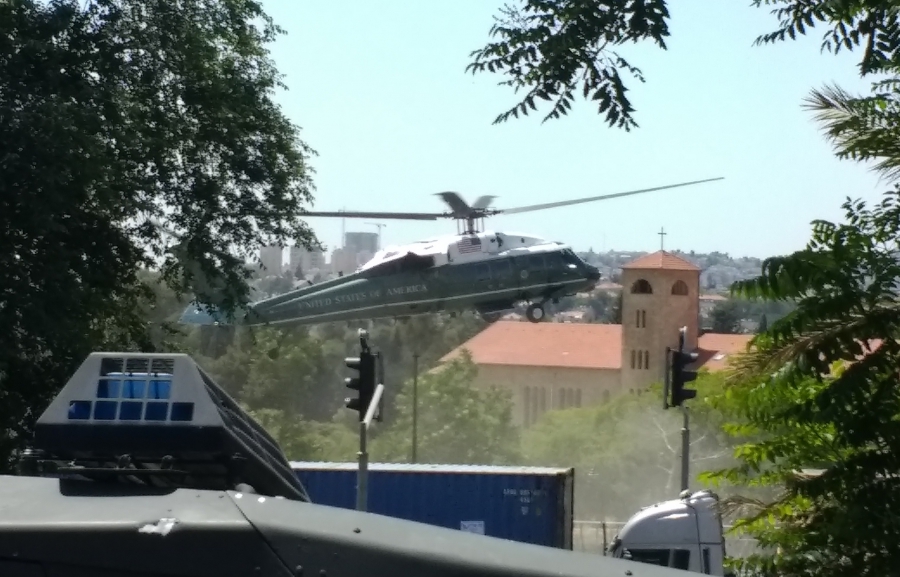 Marine One lands in southeast Jerusalem on Monday. President Donald Trump had landed in Tel Aviv, on a flight from Riyadh, earlier that morning.

Immediately after the speech, Isaac Herzog — head of the opposition from the Zionist Camp, the second-largest party in the Israeli Knesset — told Voice of Israel Radio that Trump’s remarks represented a “total change in the psychology of the Middle East.”

To arm Saudi Arabia so it can resist the Iranian threats, Trump has signed an arms deal with the kingdom worth $110 billion dollars — but giving frenemy Saudi Arabia that much firepower leaves Israel uncomfortable. After all, Saudi Arabia promotes anti-Semitism and fundamentalist extremism.

Commentator Chemi Shalev wrote in Haaretz that the deal will give the Saudis a “hold” on Trump, “which means he won’t be quick to cross them. His shifting attitude toward the Saudi kingdom shows that he can change his mind violently literally from one day to the next, and turn his worst enemy into his greatest ally without thinking twice.”

Indeed, Israeli leaders are already worried that they might lose their edge in the region. Speaking on Israeli television, Yuval Steineitz, Minister of National Infrastructure, Energy and Water Resources, praised Trump’s promises but added soberly, “We will have to sit with the Americans to ensure that in any eventuality, Israel will maintain its military superiority.”

Trump has not offered public indications that he has any such intentions.

In recent presidential elections, Iranians rejected the hardline candidates and empowered relative moderate Hassan Rouhani, who seeks to engage with the wider world. But there is always the risk Trump’s strong anti-Iran position could actually exacerbate sectarianism.

While they lauded Trump’s anti-Iran stance, Netanyahu and his right-wing coalition didn’t cheer at all for what the US president had to say about the Palestinians.

“I had a great meeting this morning with President Mahmoud Abbas and I can tell you that he is ready to reach a peace deal. I am telling you that, that’s what I do,” Trump told the suddenly quiet audience in Jerusalem.

“We know, for instance, that both Israelis and Palestinians seek lives of hope for their children. And we know that peace is possible if we put aside the pain and disagreements of the past and commit together to finally resolving this crisis which has dragged on for nearly half [a] century.”

Right-wingers said they were at least relieved that Trump made no mention of the two-state solution, which they strongly oppose. Speaking on Israeli television, Justice Minister Ayelet Shaked stated, “We know that Trump will soon come to realize that there is no partner for peace on the Palestinian side. And he will not impose anything on us, and he will not patronize us. There will never be a Palestinian state.”

And therein lies the catch: The willingness of the Sunni coalition to normalize relations between Israel and the Gulf states is predicated on the resolution of the Palestinian conflict. But Israel’s current hardline government has no intention of making the concessions that such a resolution would demand.

Former left-wing lawmaker Nitzan Horowitz, writing in the Jerusalem Post, warns that Netanyahu is merely “playing the regional card as an attempt to dissolve any prospects for progress with the Palestinians.”

In the eyes of cynical Israelis, Trump, like Netanyahu in the past, is awarding himself the world title of Mr. Anti-Terror, this time against Iran. For his part, Netanyahu hasn’t mentioned Iran publicly in months.

And meanwhile, to the average Israeli, Iran and Saudi Arabia seem particularly far away in the face of ongoing clashes with the Palestinians.