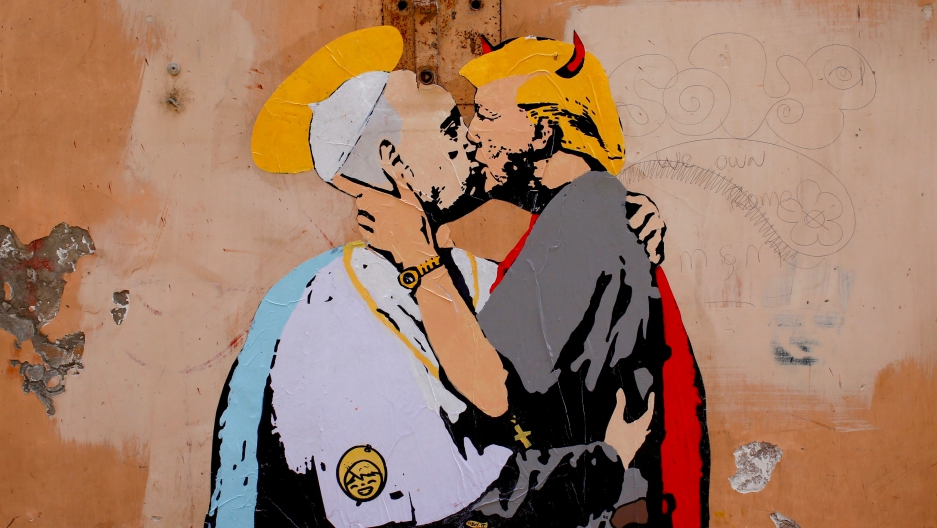 A mural signed by "TV Boy" and depicting Pope Francis and US President Donald Trump kissing, is seen on a wall in downtown Rome, Italy, on May 11, 2017.

The differences between Donald Trump and Pope Francis are stark. And at times, those differences have erupted into a full public display.

But don’t expect fireworks when the two world leaders finally get together at the Vatican on Wednesday morning for their first one-on-one meeting.

“The disagreements are known,” Clark says.

On big issues like climate change, the refugee crisis and the international arms race, Pope Francis simply does not share the US president's views.

The low point between Trump and the pope came in February last year when Francis told reporters that a leader who builds walls instead of bridges is not really a Christian.

Then-candidate Trump dismissed those comments as “disgraceful,” and he called the pope "a very political person" who was carrying water for the Mexican government.

Both men, however, seem eager to avoid escalating their major disagreements. And they are going out of their way to make this meeting happen.

“It’s a signal that both sides have an interest in normalizing relations, because, at some point, it seemed that this meeting was not taking place,” says Massimo Faggioli, a professor of theology and religious studies at Villanova University in Philadelphia.

Left unchecked, the political friction between Trump and Francis had threatened to rupture the traditional relationship between these two important world powers.

“The United States is the hard power, the power of the military and of the economy, and then there’s the soft power of the Vatican and of religion, in general,” Faggioli says.

That is, “If you think that religion has something to do, in some way, with what’s going on in the world of today,” he adds. “Well, I think that those in power, they should talk.”

“That’s why this meeting is important symbolically because it means there is a pragmatism looking for solutions to the crisis of today,” Faggioli says.

This will be a short meeting first thing on Wednesday morning before the pope holds his weekly public audience in St. Peter’s Square. The meeting will be behind closed doors, so the public will have to learn about what transpired between the two men from statements after the fact.

“Nothing replaces the importance of actually meeting someone face-to-face, actually having the encounter,” says Inés San Martín, Vatican correspondent for Crux, a website that reports on the Catholic Church. “[Francis] keeps talking about the ‘culture of encounter,’ of meeting the other and also meeting the other where the other stands.”

If Trump and Francis do get into a substantive policy conversation, they are likely to talk about the plight of Christians in the Middle East. The US president has talked about the need to protect persecuted Christian communities in the region and so has the pope.

Religious liberty is another issue that Trump and Francis both see as a priority, and this includes religious liberty in the US. Trump has said he supports the Little Sisters of the Poor, for example, a Catholic group that opposes the contraception mandate in the Affordable Care Act.

Human trafficking is one more problem that Trump and Francis have hinted that they could work together on. There is enough common ground on this issue to at least start a conversation about trafficking and modern-day slavery, says Clark.

Ivanka Trump is traveling with the president, and the White House says she is planning to meet with members of the Catholic community Sant’Egidio to talk about human trafficking.

Trump and Francis also need each other.

The pope sees himself first and foremost as “a pastor of a church without borders,” Clark says. “And we are facing some pretty big, global crises.”

If Francis wants to help the most vulnerable populations on Earth, she says, “talking to and engaging and looking for common ground with the president of the United States is important.”

As for Trump, American Catholics will be watching closely what comes out of this week’s meeting, Clark says.

“There’s agreement on abortion and some moves that the administration has made,” Clark says. But on the other hand, “there is the question of immigration ... as well as the looming elephant in the room, which is the question of the budget and social programs for the poor.”

In the days after their closed-door meeting, Trump and Francis are sure to be asked about it by reporters. In the meantime, there could be another source of insight into how the meeting went. Both leaders are quite prolific on Twitter.