Save the Children workers rescue migrants on a boat in the Mediterranean off the coast of Libya on May 23, on one of the group's biggest single-day rescue hauls so far in 2017.

More than 50,000 migrants have tried to cross the Mediterranean to Europe this year. It's a deadly journey but many survive thanks partly to all the seaborne humanitarian personnel patrolling these waters.

They saved more than 1,600 migrants in the Mediterranean on May 23 alone.

Save the Children took aboard 635 migrants from different boats that needed help after launching from Libya — the organization's biggest single-day rescue since it started patrolling the Mediterranean in August 2016, reported The World's Richard Hall from aboard Save the Children's Vos Hestia ship. 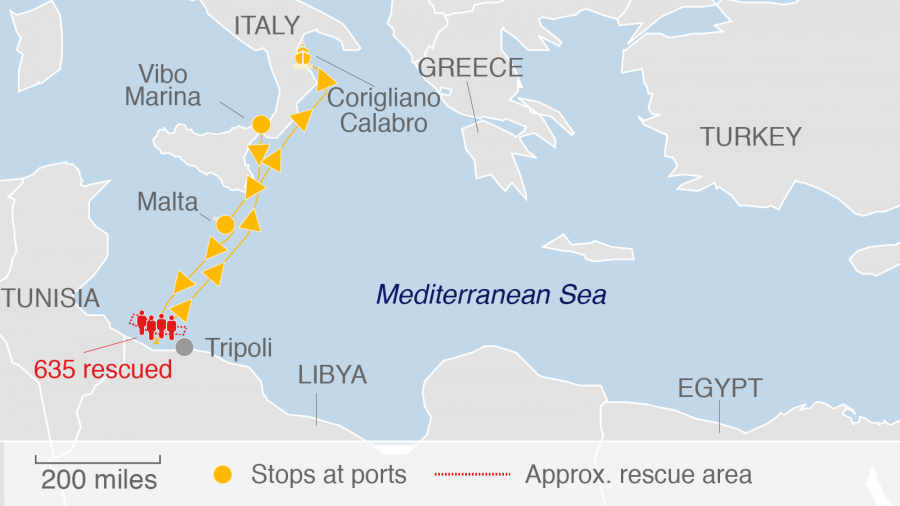 “It began at around 6 a.m. Everyone was asleep in their bunks, and we were awoken by the captain, who told us that we were about 10 minutes away from a boat that was in distress,” Hall says. It took about an hour to rescue more than 70 people on that boat. Moments later, Vos Hestia's captain spotted about 10 other boats in need of help.

They were in a common search-and-rescue zone, about 13 nautical miles off the Libyan coast.

On the same day, another team with the nonprofit Doctors Without Borders or MSF (for Médicins Sans Frontières) said they took 1,004 migrants aboard their rescue ship.

On Friday, Save the Children's Vos Hestia docked in southern Italy's Corigliano Calabro, a port right in the arch of the boot.

But MSF had trouble docking "due to the security restrictions imposed in Sicily for the G-7."

Still no assistance and with the #G7Taormina meaning we can't dock in #Sicily, the first available port is 48hrs away. #MSFboatindistress pic.twitter.com/qb7dOCEexG

By Monday, MSF said, after "an extremely difficult few days," it was finally able to disembark its overloaded ship in Naples.

Of migrants arriving in Italy via the Mediterranean this year, the largest numbers have come from Nigeria, followed by Bangladesh, Guinea, Ivory Coast, The Gambia, Senegal, Morocco, Mali, Eritrea, Pakistan and Somalia, according to the United Nations.

The nongovernmental organizations have earned public praise for their work. But some groups have also come under scrutiny in Italy — and they’ve also had trouble with the Libyan coast guard. Save the Children, Doctors Without Borders and other groups accuse Libyan officials of harassing them and migrants in need of help.

The dangers of the journey are severe. On Wednesday, the day after those record rescues, more than 30 people died at sea — "most are toddlers," according to Chris Catrambone, the founder of rescue group MOAS.

Even though the number of migrants boating to Europe has declined from the record 2016 total, more than 1,500 have died or gone missing in the attempt so far this year.

The World's correspondent went aboard the Vos Hestia earlier this month to follow Save the Children as it carried out rescue operations on the Mediterranean. You can listen to his reporting from the voyage on The World, and watch it unfold here, and via the show's Instagram feed.

Here are some of his latest Instagram posts below.

We've arrived in the search and rescue zone, in international waters off the coast of Libya. The team are running drills – going through the rescue process with staff members acting as the migrants. The weather looks favorable for the migrant boats tomorrow, so it may not be long before they are doing it for real. Our correspondent @_richardhall is on board a migrant rescue ship in the Mediterranean Sea this week, where more than 1,300 people have died so far this year. Follow us for live updates.

Often when rescuers are approaching a vessel in trouble, they don't know the nationalities of those on board. It's Miriam's job to make first contact, calm them down, and explain how the rescue is going to work. That means she sometimes has to run through instructions in English, French and Arabic. This footage was taken during a drill today in international waters off the coast of Libya. @_richardhall is travelling with a @savethechildren ship as they make their third rescue this year.

The Vos Hestia carried out it's first rescue of this voyage this morning. The call came through at 6am while most of the crew were still asleep. It was a speedy rush to the stations. Dozens of people now safely on board.

Second rescue of the day underway right now. People are transferred from unsafe dinghies to the Vos Hestia 12 at a time.

One of 550 rescued from the Mediterranean Sea today by @savethechildren team. The relief on people's faces when they step on to the boat is quite something.

Take a look at this boat and you'll get a sense of how so many people perish on this voyage. The boats are overloaded by greedy smugglers. Many of them are not fit for purpose, and simply fall apart.

The World's @_richardhall photographed this scene two days ago aboard a migrant rescue ship in the Mediterranean. The Vos Hestia ship filled up quickly when Save the Children took 635 people aboard. The migrants slept in all corners of the overcrowded ship, which is now docked in southern Italy.

How do you pass time on a rescue ship? You sing. An impromptu gig taking place on the Vos Hestia right now. People from the Ivory Coast, Nigeria and Bangladesh singing songs from home.These guys were pulled from the water 48 hours ago. They are heading to an uncertain future. But they are far from broken.

Land ahoy! We're passing Sicily on our way up the coast. It's the first time the migrants on board have seen land in days. A great relief for many.